A Spine of the Times – A History of Ankylosing Spondylitis 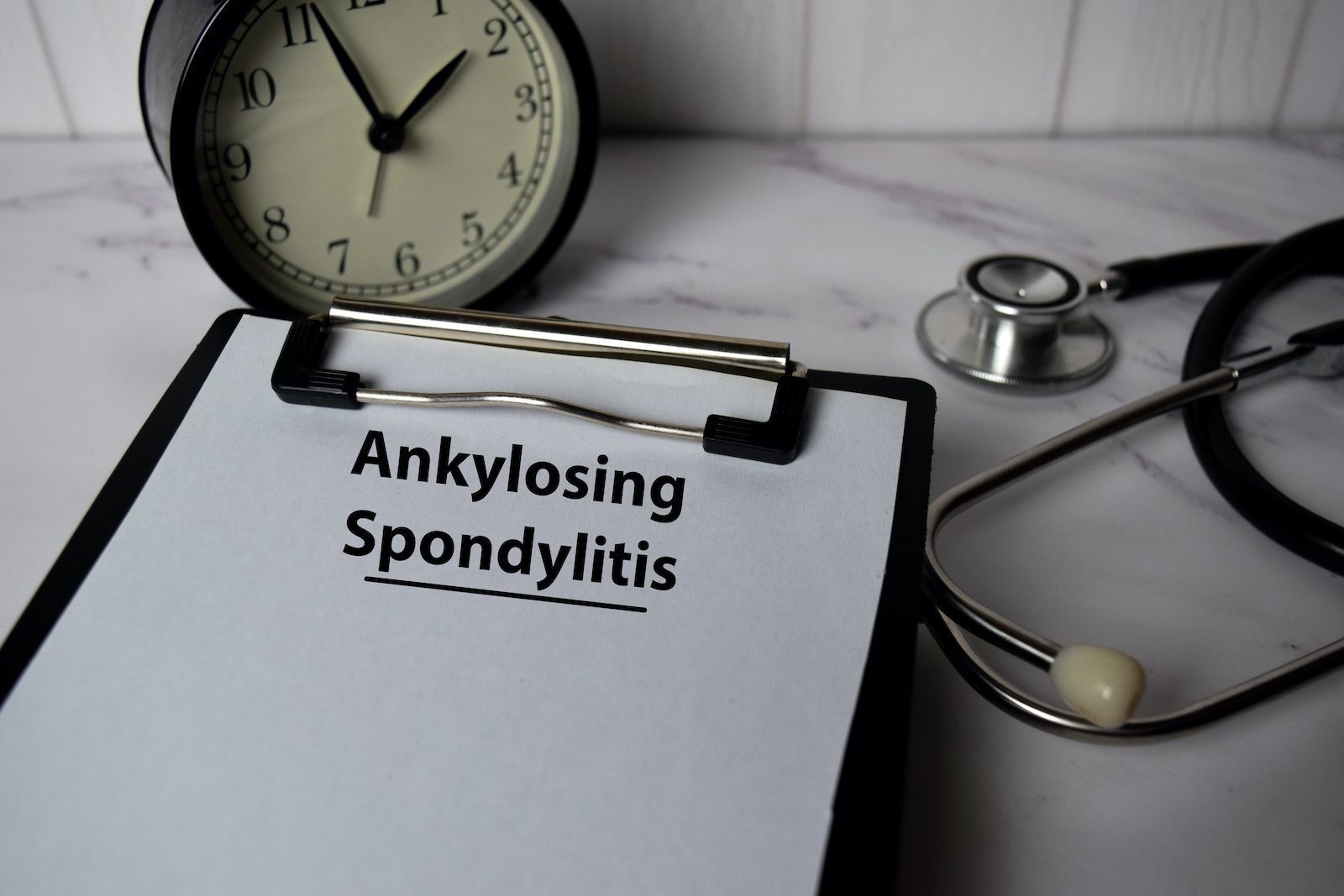 A Spine of the Times – A History of Ankylosing Spondylitis

Ankylosing Spondylitis (AS) is a condition in which there is long term inflammation of the joints of the spine, often with involvement of the joints where the spine joins the pelvis. Although not as common, other joints such as the shoulder and hips can be involved and patients may also experience bowel and eye problems. Recurring back pain is the symptom most experienced by AS patients, with stiffness of the affected joints worsening over time. It affects between 0.1 and 1.8% of people and, unusually for an autoimmune condition, is more common in males than females. There is not yet a cure for AS. Treatment is geared towards improving symptoms and preventing the condition worsening. Treatments may include medication, exercise, and surgery. Medications used include NSAIDs, steroids, DMARDs such as sulfasalazine, and biologic agents such as TNF inhibitors.

In Cairo, a member of the Geological Museum staff discovered the remains of a crocodile. The remains were determined to be at least 900 000 years old. Of particular interest in this specimen were two vertebrae that showed thick bands of osseous tissues which has caused the two vertebrae to become fused to each other. Subsequent examination of the specimen by Sir Armand Ruffer led him to conclude that ‘the pathological lesions which crippled the vertebral column of a crocodile living not less than 900,000 years ago are exactly similar to those of spondylitis deformans seen in modern human beings’.

The disease described in this prehistoric specimen has also been identified not only in other species such as cave bears, sheep and oxen from ancient Egypt, scared monkeys found at the ancient temples at Thebes and dinosaurs from the Mesozoic era and Triassic period. Dr Moodie, a researcher in the 1930s commented on these discoveries ‘apes, cattle, horses, the giant wolf, the sabre-toothed tiger, camels, Eocene mammals, crocodiles and dinosaurs have all left evidence in their skeletons of an ankylosing spondylitis which in their lifetime thousands of years ago must surely have severely limited their movement and caused them considerable pain’. 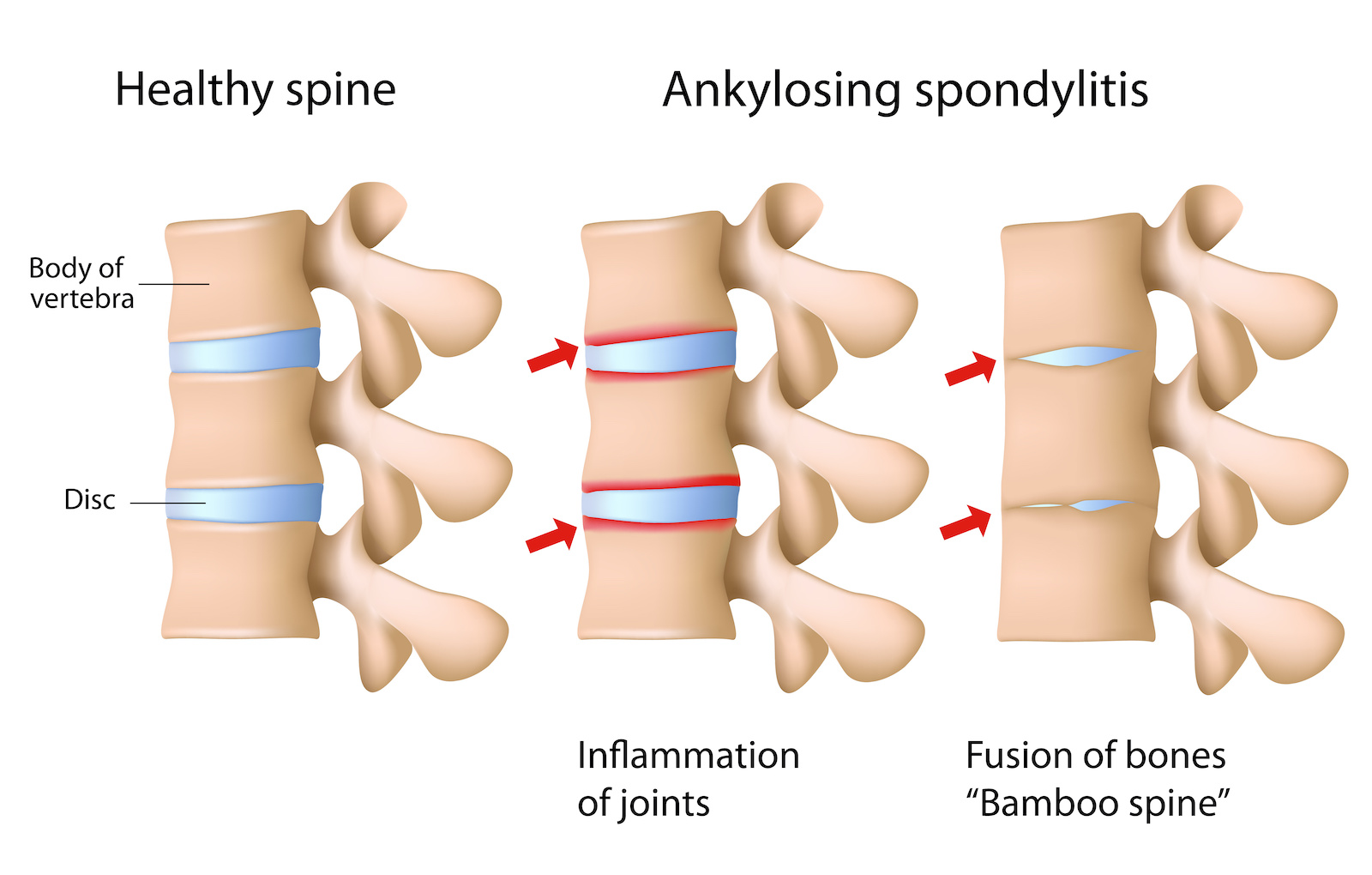 Ankylosing spondylitis of the spine

The Age of Reason

These discoveries make it clear that AS existed even before the evolution of human kind. Therefore, it should not be surprising to hear that AS has plagued man from our earliest times. The first case in published medical literature occurred in 1559 when Realdo Colombo, an assistant researcher at the University of Padua described two skeletons with spinal disease suggestive of AS.

In 1693, Irish physician Bernard Connor offered the first confirmed pathologic description of AS in a skeleton unearthed from a French churchyard. He wrote that the skeleton’s vertebrae “were so straightly and intimately joined…that they really made but one uniform continuous bone.” In his thesis he put forward that man likely had difficulty breathing due to fusion of the rib joints as well as trouble turning and bending due to spinal fusion. In the mid-1800s in Europe, numerous clinical cases were described for the first time, with clinical and post-mortem pathology correlation implying links between the spinal and extra-spinal manifestations (including iritis) in the patients.

AS was characterized as a distinct disease entity during the latter part of the 19th century. Russian neurologist Vladimir Bechterev (1857-1927), based on a series of three patients, put forward the idea that a chronic inflammatory process of the vertebrae had led to rigidity, bone fusion, and myelopathy, and that it had a hereditary component. During this period a German neurologist, Strumpell, and a French Neurologist, Marie both described such cases and explained the disease as being primarily rheumatological. In addition to these significant contributions, a German pathologist, Eugen Frankel, gave the condition the name AS in 1904. The development of radiology in the late 1800s facilitated the ability to diagnose AS before severe ankylosis had occurred.

Changes visible on x-ray were characterized early on in the next century by Forestier, Scott, Krebs and others who described sacroiliac joint arthritis early in the disease, with later syndesmophyte formation (a bony growth originating inside a ligament leading to fusion of vertebrae). It was suspected that AS was familial and studies were conducted to try to determine inheritance patterns. Many still thought of AS as a subset of rheumatoid arthritis (RA), however the striking difference found in x-rays images as well as the absence of rheumatoid factor in these patients prompted AS to be seen are an entirely separate condition.

From the early 1930s to the mid-1950s, patients with AS were frequently treated with radiation therapy. Although often effective, it was abandoned due to the raised risk of secondary malignancies in these patients. A follow up study in the United Kingdom found that AS patients that had undergone at least one course of radiation therapy had threefold increase in mortality for leukemia and a 28% increase in mortality from neoplasms other than leukemia or colon cancer, compared to the general population.

In the 1950s associations of AS with other seronegative arthritides were increasingly being recognized. Shortly after Moll and Wright proposed their seminal classification for psoriatic arthritis, they also proposed a unifying concept for a group of related seronegative arthritides. Conditions included in this grouping were AS, psoriatic arthritis, reactive arthritis, intestinal arthropathies, and Behcet’s syndrome. These conditions share common characteristics such as negative rheumatoid factor, absence of ‘rheumatoid’ nodules, peripheral inflammatory arthritis, radiologic sacroiliitis, tendency to familial aggregation, and related clinical features such as psoriasis, uveitis, conjunctivitis, intestinal inflammation, and genitourinary infections.

Out With the Old

The genetic link between a number of these conditions including AS, reactive arthritis, and psoriatic arthritis was determined in the 1970s to be the HLA-B27 gene. After this discovery, progress stalled and treatment was limited to non-steroidal anti-inflammatory drugs and physiotherapy. Novel insights into the disease have occurred in the last two decades as a result of large genome-wide association studies, advances in imaging, and increased understanding of immunology. This resulted in new classification criteria as well as new therapies greatly improving the lives of AS patients.