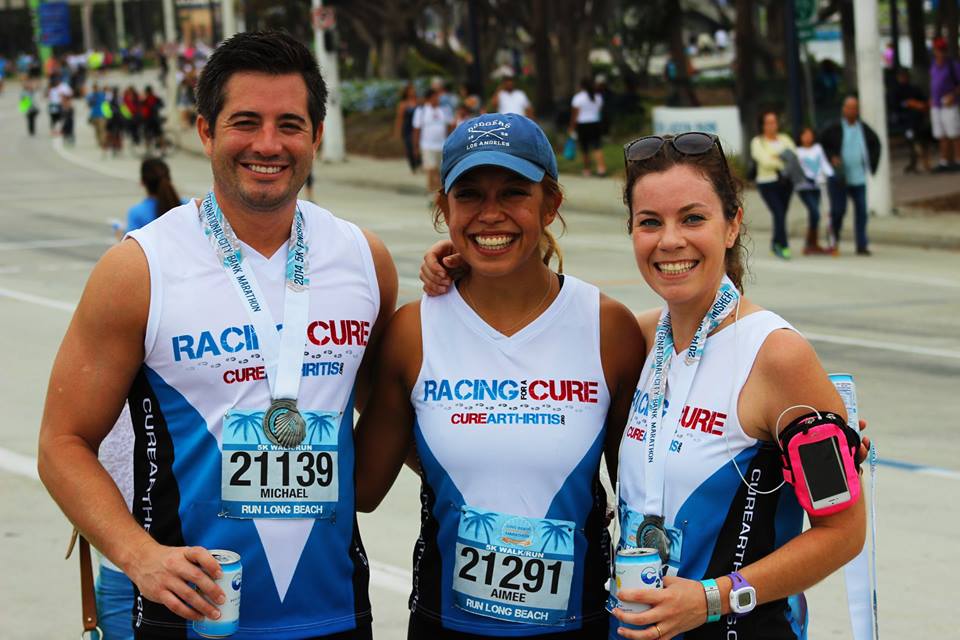 Posted at 16:03h in Arthritis News by ANRF 0 Comments
Share

The Arthritis National Research Foundation is pleased to announce that Aimee Espinoza, a rheumatoid arthritis sufferer and athlete who races for ANRF’s Racing For A Cure program, was recently named a Cure Arthritis Ambassador. As an ambassador for the foundation, Aimee will be using her influence to spread the message that research is the key to finding a cure for arthritis.

Aimee’s platform consists of a blog that she writes, http://fitaimee.blogspot.com/, social media, and a range of supporters that sponsor Aimee’s various races, the proceeds of which go toward the arthritis research that ANRF’s scientists are conducting across the country.

Due to her misdiagnosis at the age of sixteen, Aimee is enthusiastic about joining the roster of ANRF’s Cure Arthritis Ambassador team so she can inspire others who are facing a difficult process being diagnosed with rheumatoid arthritis.

“I want to change the face of arthritis and show people that even though I have a crippling disease, I can still move and I hope that I can inspire the community to move with me as well,” Aimee said. “I’m thrilled to be an ambassador because I want to be a part of something bigger than me to bring awareness to rheumatoid arthritis, a disease that effects adults and children.”

When she was properly diagnosed at age 26, Aimee decided that a “clean diet” was necessary to help reach her own goals of living an active lifestyle and to manage her arthritic pain. She decided to eat anti-inflammatory foods because the various medications prescribed by her doctor left her with terrible side effects that only made her RA symptoms worse.

Through her social media following, @FitAimee_RA on instagram and twitter, Aimee attempts to inspire other rheumatoid arthritis sufferers to stay as active as possible. She uses herself as a paradigm to show that despite an autoimmune disease, it is not impossible to stay active.

Most recently, Aimee participated in the Long Beach Marathon’s annual 5K race, sporting her Racing For A Cure jersey to spread the word about the fundraising program and the enterprising work ANRF funds. The 5K turned out to be one of her most successful races.

“I was filled with adrenaline and was so happy I finished the race and had another one under my belt,” Aimee said. “Staying active is very important to me, not only to keep my body moving, but also to prove all those doctors wrong who said I would never run again. Now, I have several races under my belt. I know I need to keep moving.”

“We’re delighted to have Aimee become a Cure Arthritis Ambassador for our foundation,” said Executive Director, Helene Belisle. “Through her social media following and constant involvement and support of Racing For A Cure, we are confident she’ll be a valuable asset to spreading ANRF’s mission that research is the best solution to finding an arthritis cure.”

To make a donation to Aimee’s efforts please visit her Racing For A Cure donation page.

What would finding a cure for arthritis mean to you? Leave a comment below.