A Brief History of Rheumatoid Arthritis

A Brief History of Rheumatoid Arthritis

Posted at 09:38h in Rheumatoid Arthritis, The ANRF Chronicle by ANRF 0 Comments
Share

A Disease as Old as Time

More than 2300 years ago the father of modern medicine, Hippocrates, was quoted saying “It is incredible how fast the mischief spreads.” In saying this Hippocrates was referring to a condition arthritic in nature, with an onset occurring in the mid-30s, affecting first the hands and feet followed by the elbows and knees. It is believed by many that the disease to which he was referring was Rheumatoid Arthritis (RA).

RA is the most common form of inflammatory arthritis, with cells of the immune system attacking healthy joints. The earliest possible diagnosis and therapeutic intervention can do much to prevent severe joint damage. The following article looks at the long history of RA and the advances that have been made in treatment of the disease.

Throughout our history there are examples of RA. Egyptian, Macedonian and Greek remains accessed in the 19th and 20th century by Egyptologists were reported to have serious articular lesions with eburnation of bone, this being suggestive of RA or ankylosing spondylitis (AS). Symmetrical, polyarticular erosive arthritis consistent with RA has also been identified in Native American remains dating from as far back as 4500 BC.

Numerous other ancient physicians describe arthritis-like conditions. An Ayurvedic medical text from 123 AD refers to a disease characterised by swollen, painful joints and occasional fever, in all likelihood this was an observation of RA. The physicians of important historical characters such as the Roman emperor Claudius have made similar observations, illustrating the long record and sizable impact of RA throughout history. 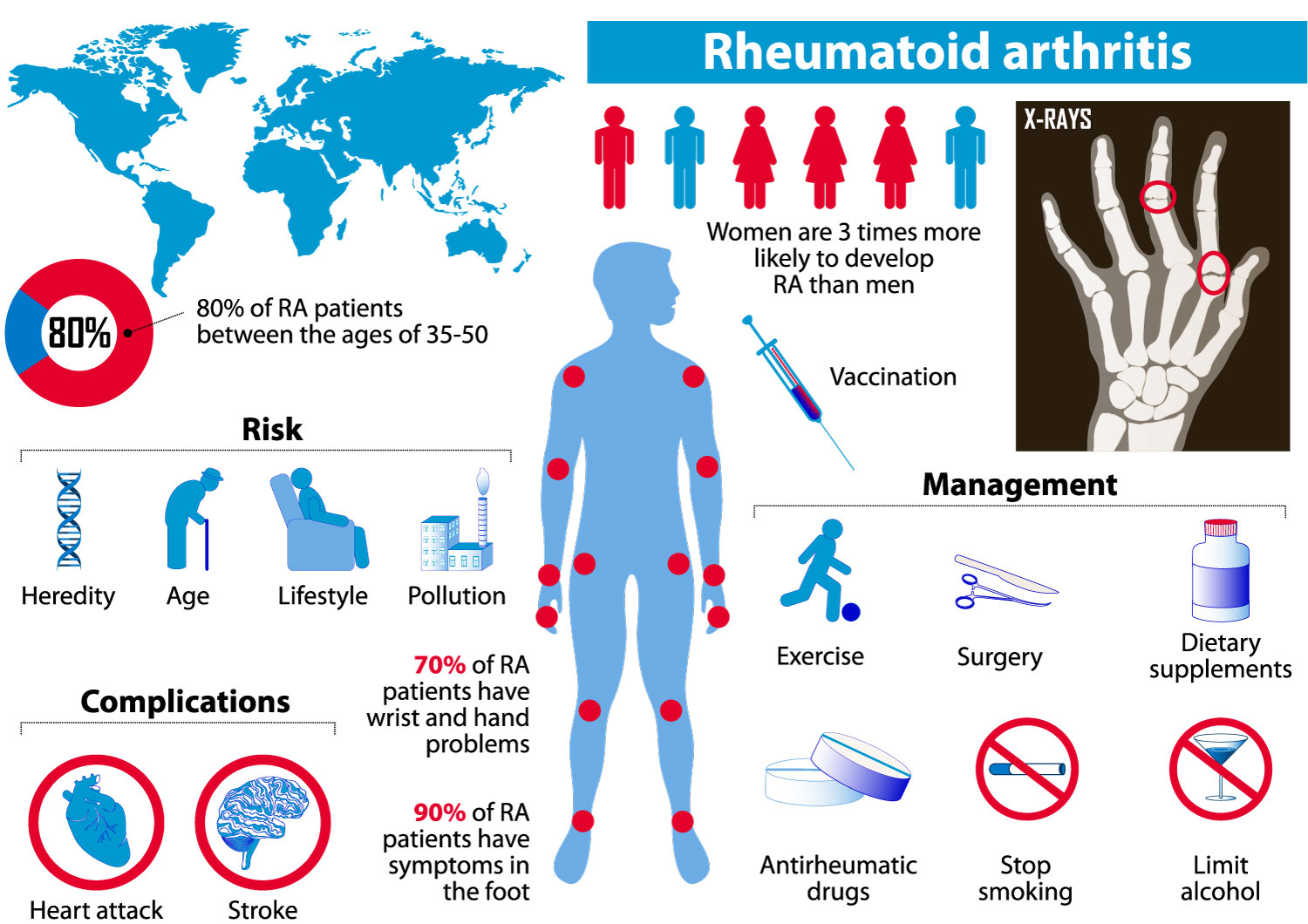 Medieval European physicians attributed joint maladies to the flux of congested humors, believing that bad humors dripping into the affected joints were the cause of these conditions. Despite the large amount of ancient evidence indicative of RA, the first formal evidence of RA appears in 1591, French physician Guillaume de Baillou applied the age-old term “rheumatism” to a condition characterized by swelling, stiffness, and pain. It has been hypothesised that there was an increase in these conditions associated with a post-Columbian Europe. Tabaco, a known risk factor for the development of RA was introduced to Europeans in the new world by Native Americans. Furthermore, changes to the gastrointestinal microbiome, occurring as different populations came into contact with each other are now also considered to be associated with RA. It is suspected that these new environmental triggers had a role to play in defining RA.

The Contemporary View of RA

The modern description of RA was put forward in the 19th century, Jacob Landré-Beauvais described a painful, inflammatory arthritis that affected nine female patients, leaving the hand joints swollen and deformed. He referred to the condition as “asthenic gout,” distinguishing it from classic gout on the basis of on female predominance, polyarticular inflammation, pattern of joint involvement, as well as the chronic nature of its progression.

In 1852 Sir Alfred Garrod renamed the condition rheumatoid arthritis and defined it as a separate condition to osteoarthritis. Previously the two disorders were considered a singular disease – arthritis deformans.

Progress in the field of rheumatology was rapid, an in-depth history would require greater scope than is possible in this series. However, there are certain key discoveries which warrant mentioning. In 1897, the chemist Felix Hoffman, working at the German company Bayer, modified the bitter-tasting salicylic acid (used to treat inflammation) to a more palatable form: acetylsalicylic acid or aspirin, which rapidly became a widely used treatment for various forms of arthritis. Nonsteroidal anti-inflammatory drugs, which do not irreversibly inhibit platelet function, have been developed and are widely used to treat pain arising from arthritis.

Injectable gold was used as a disease-modifying antirheumatic drug (DMARD) in the 1930s, with many other treatments fulfilling the same role having been developed since then. Gold showed some success with years of use and is still a component in a number of DMARDs used today. Sulfasalazine was developed in the 1930s by the rheumatologist Nanna Svartz at the Karolinska Institute in Stockholm, Sweden, and hydroxychloroquine, an antimalarial drug, began to be used as a “remittive agent” for RA in the 1940s.  This decade also saw RA and AS being classified separately based on the discovery of the rheumatoid factor.

In 1950 a Nobel prize in Physiology and Medicine was awarded to Philip Hench and Edward Kendall. Working at the Mayo Clinic, the pair treated RA patients with compound E, an extract of the adrenal gland. This corticosteroid resulted in dramatic resolution of joint inflammation and systemic symptoms, such as had never been seen before. This treatment had a number of associated side effects, and patients soon developed cushingoid features, pathologic fractures, glucocorticoid-induced hyperglycaemia, and other adverse effects. Importantly while this drug gave good symptomatic relief it was not able to prevent joint damage.

In 1975 the Sharp scoring system was developed to allow for the quantification of joint damage in RA patients. This a necessary step in being able to access the efficacy of treatments.

1980 saw considerable strides being made in the treatment of RA by the use of a drug developed for chemotherapy in the 1950s – methotrexate. This drug revolutionised RA therapeutics, most patients that received the drug responded well with good control of joint inflammation. This was a game changer and led to a great reduction in patients having to undergo joint replacement or other orthopaedic surgeries. This drug is still used as an effective treatment today. DMARDs can require a few weeks before becoming effective and will therefore often be prescribed in conjunction with other treatments to rapidly reduce inflammation (such as corticosteroids or non-steroidal anti-inflammatories) and provide symptom relief). The use of drugs such as these meant that treatment evolved from providing symptomatic relief to altering the disease activity itself.

The Logic of Biologics

Targeted biological therapies for inflammatory diseases were first used in the 1990s. The pioneering work undertaken by Sir Ravinder Maini and Sir Marc Feldmann resulted in the first successful trial of a drug synthesized from a biological source. The first biologics inhibited TNF-α from binding to its receptors, a cytokine active in host defences against some infections and malignancies, but additionally promotes inflammation and bone erosion. Dramatic improvements in disease activity were seen when RA patients were placed on infliximab and patients did not experience the protean adverse effects seen with the use of corticosteroids. Studies have consistently show that combination methotrexate giving in conjunction with TNF-α inhibitor therapy leads to better outcomes than with either agent alone. This set the stage for the current era of treatment which focuses on the use of these drugs.

In recent medical history, genome wide studies have been able to identify a number of genetic risk factors for autoimmune diseases such as RA, again giving rise to many potential therapeutic targets.

Two millennia have passed since Hippocrates first considered the disease arthritis. In the ensuing years a wealth of knowledge has been collected, allowing for revision and improvement in treatment of RA and other arthritic conditions. Advancements, particularly in the last 25 years, mean that treatments are capable of giving dramatic symptom relief, giving many patients near normal functioning capacity. It is no longer inevitable that patients will progress to the point of severe disability. However, much work still needs to be done, building on the foundations of the physicians and researchers that have come before, hopefully leading to not only the better management of such conditions but eventually a cure.