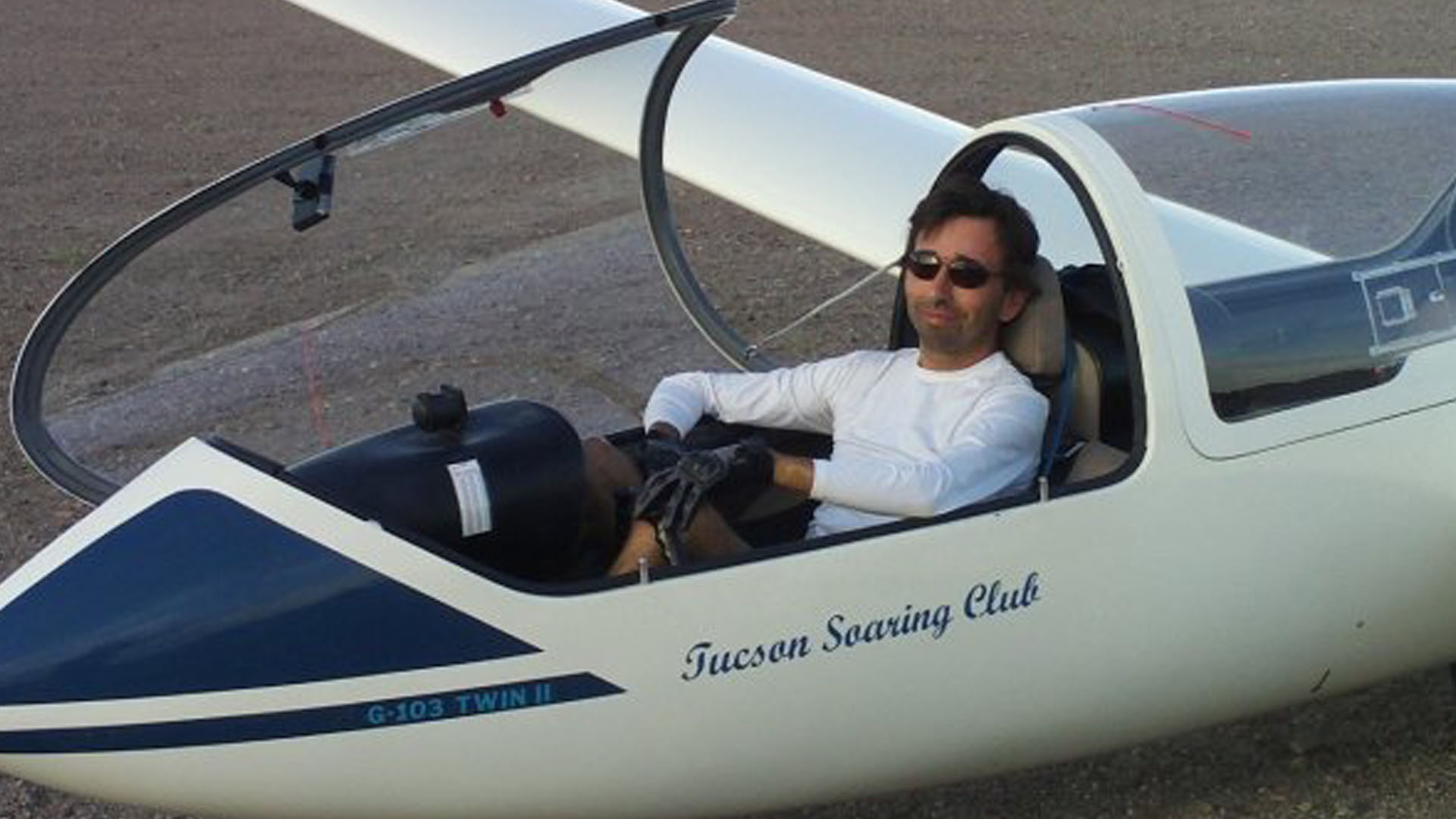 As President and founder of Arthritis Introspective, a Tucson-based nonprofit that strives to improve the lives of arthritis patients through education, empowerment, and support groups, Kevin Purcell knows a thing or two about living with arthritis; in fact he’s a patient himself.

He was first diagnosed when he was only ten years old, classifying his diagnosis officially as juvenile rheumatoid arthritis. Kevin’s disease, however, is still “ridiculously active” today; his C-reactive protein levels being ten times what they were three years ago.

And although his juvenile arthritis has brought him strife, hospital visits, and two bilateral knee replacements, it hasn’t kept him from living out one of his dreams…

Ever since he was a child, Kevin’s parents would take him to aviation shows which caused him to become very interested and curious about planes; he even clocked some serious hours playing on computer flight simulators. When he turned forty, his companion, Becky, arranged for Kevin to participate in an hour-long, aerobatic sightseeing flight in a high performance airplane. By the end of the ride, Kevin’s love of flying was refreshed and he knew he wanted to become a pilot. However, due to the strict regulations from the Federal Aviation Administration (FAA), Kevin’s arthritis would not allow him to become a private pilot operating a small plane with a motor.

Downtrodden, Kevin began to write off his dream as just that – something he may never have the opportunity to achieve. However, one evening, as he was pumping gas into his motorcycle, Kevin was approached by a veteran war pilot. After complimenting Kevin’s motorcycle, the man suggested he look into joining a soaring club to become a glider pilot citing “it’s a great way to learn the fundamentals of flying.” Not to mention gliders don’t have motors, it may just be the perfect solution.

Kevin took the man’s advice, but when he went up for his first glider flight, he was petrified.

“It felt like when Thelma and Louise drove into the Grand Canyon,” he recounted. “I was flying in a plane without a motor! Why did I think I would like this?”

After landing, Kevin forced a smile and being unsure if he’d return, spent some time researching how gliders work, the air currents, and how it was he was able to stay in the air. After some hesitation, he returned.

“Remember all those ‘wasted’ hours in front of the computer pretending I was a pilot? Turns out it was worth it,” he said. “I surprised many of the flight instructors for someone with zero real world flight experience. I was told that I was not a great disabled pilot, but just a great pilot in general.”

In December of last year, three U.S. Senators introduced the General Aviation Pilot Protection Act bill, which included a provision that would give disabled persons the ability to fly a powered plane given that they pass all of their flight training. Kevin hopes to add this capability onto his current pilot’s license.

Aside from his flying however, Kevin still faced a great amount of hardship growing up with arthritis; in fact, it was all he had ever known. He doesn’t necessarily remember the physical pain of growing up with JA, but he does remember how isolated and misunderstood the disease made him feel. He suffered from a lack of confidence and didn’t even like looking at his reflection in the mirror because he hated what the disease had done to his body.

However, that all changed when he entered his first arthritis support group, where he found other young people just like himself who were beautiful, confident, and funny who didn’t let their diseases run their lives.

“That group saved me and made me think of the thousands of others whose lives could be helped through the simple act of meeting others,” Kevin said. “We created Arthritis Introspective to help fulfill that very important part of patient care and would like to see it grow and serve even more people through local support groups and national gatherings.”

The arthritis support group Kevin found allowed him to re-visit his passion for flying, because it allowed him to re-discover a passion for life. Without that inspiration from others like himself, Arthritis Introspective might have never been founded. He strongly suggests that all rheumatic patients seek out a support group or community of like-minded sufferers; and if there is not an established group locally, then start one. He also said that volunteering for nonprofits that support the arthritis community is a great way to not only meet others with autoimmune diseases, but it’s also a great way to make friends and become more educated about the work those nonprofits do and how they might have an effect on your life.

If you’d like more information on Arthritis Introspective, visit their website. To further support ANRF, make a donation.