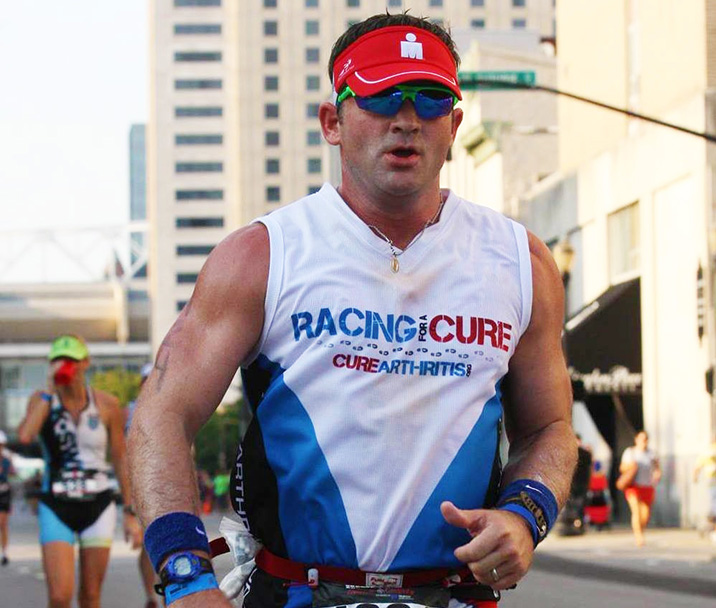 Posted at 15:56h in Racing For A Cure by ANRF 0 Comments
Share

Jon Bourgeois is no stranger to pain, as an athlete with arthritis, Jon pushes past the pain of his osteoarthritis in each of his endurance events. This past August, he competed in the 24-hour long Habanero 100-kilometer ultramarathon in the blistering Texas heat. Competing against the pain of the event and his arthritis, not to mention while carrying six pounds of water on his back. This athlete with arthritis has pushed himself to his limits in five Ironman triathlons in the past two years alone! However, Jon says that the pain experienced from ultra-distance racing doesn’t compare to the pain of his osteoarthritis (OA).

Despite being wrought with arthritis pain on a daily basis, Jon refused to make excuses and his positive attitude has enabled him to take his obstacles from OA in stride and live out his dreams of competing in ultra-distance races.

Four years ago, when Jon was 41 years old, he was diagnosed with OA. His arthritis has left his shoulder permanently frozen in place after his left clavicle was removed in an attempt to ease his pain. Additionally, his pain levels resulted in an untended side effect, Jon’s inactivity led to an initial gain of over thirty pounds.

However, giving up was never an option for Jon; instead, he decided to become an athlete with arthritis. He decided to be proactive by swimming to increase the mobility in his shoulder and eventually ventured into triathlons and ultramarathons. This past June, Jon competed in the Escape from Alcatraz triathlon with his Racing For a Cure teammates to benefit the Arthritis National Research Foundation. Jon and his teammates strongly believe in the organization as it is at the forefront of discovering new arthritis treatments.

“I would have never become involved in endurance sports if I did not have arthritis. In that regard, I see my arthritis as a positive and I want to show others that they can be an athlete with arthritis as well. I hope that sharing my story will help at least one person suffering from this disease.” 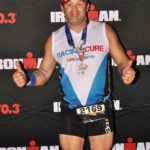 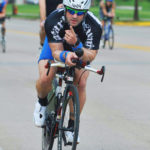 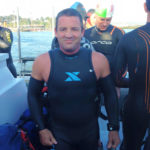 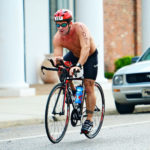 After competing in five Ironman triathlons, his experiences left him hungry for more. A few weeks ago, Jon took on the Habanero 100k, a race he says was his toughest yet. He told us that from the heat to the rocky terrain, the race tore his feet and body to shreds. But in a race where only half his competitors crossed the finish line, Jon was ecstatic to finish with a time of 23:13:15. Despite the excruciating pain that came afterward, he made a promise his fans and supporters to expect him back next year.

“When I race, I am obviously hurting just like everyone else and maybe a little more. But I know that the more it hurts, the better the post-race story will be and the more I might be able to inspire someone else. When I’m out there I try to thoroughly enjoy every minute I am racing because I don’t know how much longer I will be able to keep doing this.”

Despite Jon’s notable athletic feats, he considers himself to be an average athlete, and credits his success with staying active and maintaining a nutritious diet. He admitted that he “grossly undertrains,” and pays the price for it as he suffers in his races. However, as uncommon his training regiment may be, he cherishes freeing up time to spend with his family. Despite all that, he still is an incredible athlete with arthritis.

“The pain from my arthritis has altered everything I do, but I have learned to adjust to it. I swim all my triathlons in a modified side stroke with one arm. I kick with my legs and drag myself with my right arm because my left shoulder is frozen. But I’m not going to give up!”

Next up for Jon is the Ironman Florida in November, and following that, he will take on Ironman Texas in May of 2016 and Ironman Chattanooga in September 2016.

“The best thing you can do is to stay active. If all you can do is walk thirty minutes a day, then that’s your ‘Ironman.’ Don’t give up. You never know what tomorrow will bring. You too can be an athlete with arthritis!”

How do you challenge yourself despite your arthritis? Are you pursuing your dreams like Jon? Tell us your story in the comments below!