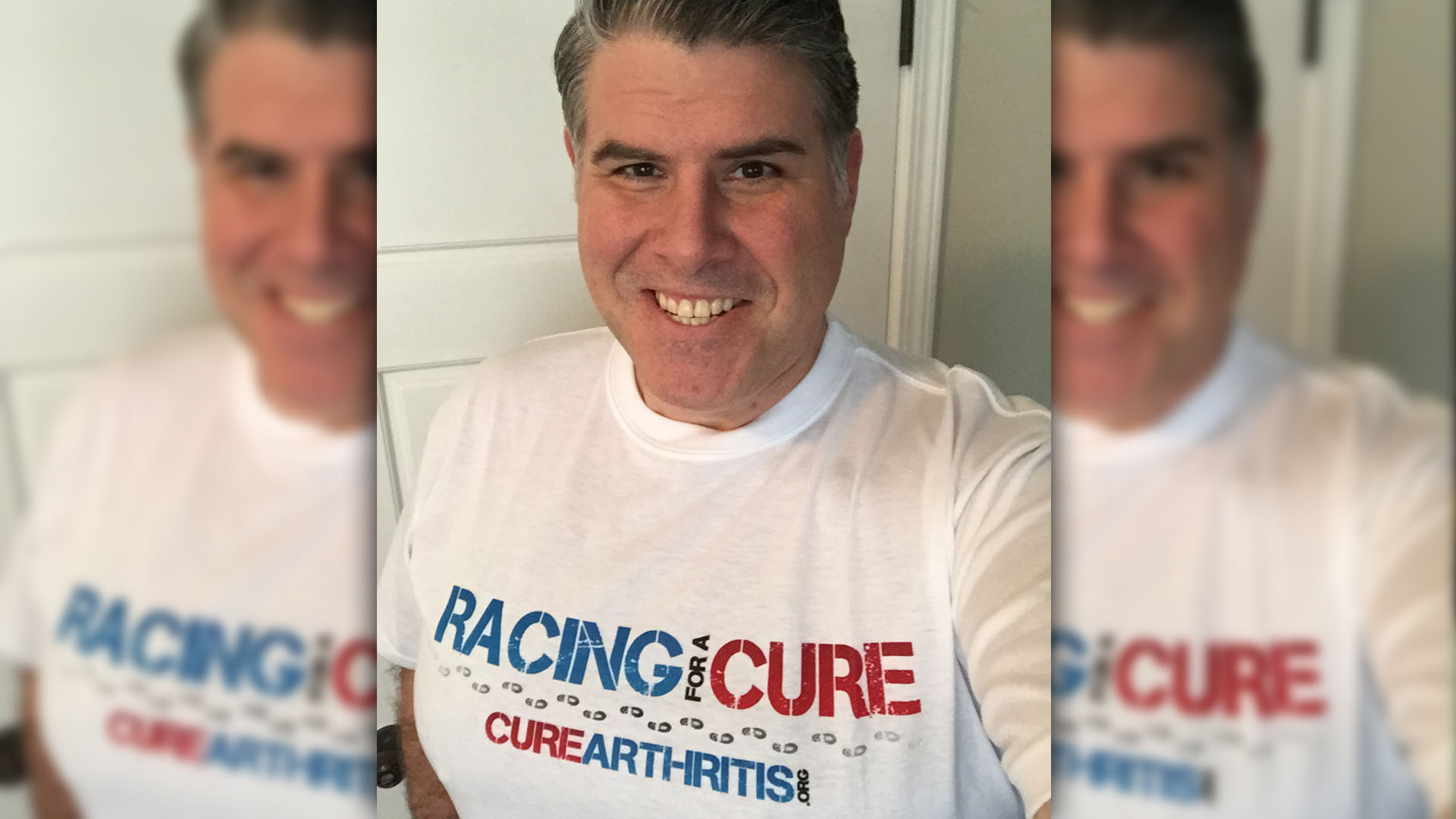 Posted at 15:35h in Racing For A Cure by ANRF 4 Comments
Share

In 2013, Mark Rucker – known by his fans as “The Beast” – lost 135 pounds and finished his first Ironman. As if that wasn’t challenging enough, he is back training for his second Ironman this year. This time, however, he is facing an entirely new challenge while he runs: his recent rheumatoid arthritis diagnosis.

The 46-year-old Lexington, Kentucky native was diagnosed with rheumatoid arthritis only a few weeks ago. Mark decided that rather then let the news of his diagnosis stop him, he would channel his efforts towards raising money and awareness for arthritis research as the newest member of the Arthritis National Research Foundation’s Racing for a Cure team.

After walking away victorious in a prior battle against his weight, he decided to view his RA diagnosis as just another bump in the road on his journey back to the Ironman this fall, instead of letting it bring him down.

Last year, Mark began suffering from painful, swollen joints that were not attributed to his Ironman training. His whole body ached for five months before his rheumatologist finally diagnosed him with rheumatoid arthritis. To stop the disease from progressing, Mark began taking steroid medications, but despite the treatment, his arthritis began to pose great difficulties in his everyday life. The largest obstacle was the constant pain he felt radiating throughout his body, including in his ankles, wrists, elbows, shoulder, knees, neck and jaw.

“Doing some of the things that I used to take for granted every day, like using my cell phone, making an espresso, getting dressed, driving, walking up and down stairs and even just chewing have been very challenging lately,” Mark admitted.

Beyond looking to his incredible teammates on the Racing for a Cure team for inspiration, Mark’s own weight loss journey has served as a powerful lesson to all arthritis sufferers in overcoming challenges. In 2011, he weighed 385 pounds, which was his highest weight ever. He managed to drop 135 pounds over the next few years by following a nutritious diet and exercise program.

What makes Mark’s accomplishments so astonishing is that throughout his life he had never considered himself an athlete; and yet just two years after committing to losing weight, he now completes in what is considered the pinnacle of endurance sports – the Ironman.

At the finish line of his first race when he heard the booming voice from the megaphone shouting, “You are an Ironman!” he knew that his weight-loss journey was over and the beginning of a new, healthy lifestyle was underway.

With his sights set on competing in the Louisville Ironman in 2015, Mark’s goal is to eventually be training over 20 hours a week, while incorporating yoga and Tai Chi into his training regimen, in order to be in top physical shape and jump the hurtle that his arthritis poses. One of the key ingredients to Mark’s success is finding a healthy balance of pushing and nurturing his body.

“The Louisville Ironman will be a challenge, but my life has always been about finding my limits and going beyond them,” said Mark. “I know that I will have to push my body but also be in tune with it.”

Not only is Mark anxious to once again compete in his favorite race, but he also found meaning and purpose by raising money and awareness for arthritis research. In addition to speaking at events, his remarkable story has been covered by various news outlets for overcoming adversity and inspiring so many others. Whether it’s battling excess weight or rheumatoid arthritis, Mark is determined to help others dealing with similar circumstances and lead by example.

“I want to inspire others along the way and I’m motivated to help others regardless of the journey I am on.”

Throughout his remarkable weight-loss journey Mark has inspired his family, friends, and fans. Now, he will have the opportunity to inspire a new community of people of those who suffer from arthritis pain. Through all the challenges Mark considers his obstacles as merely bumps in the road as he prepares to take on the challenge of his life this fall.

“You are able to achieve anything that you set your mind to achieve. If you dream it and plan it, you will achieve it. To me, RA is just another obstacle to overcome.”

Have you improved your health by losing weight like Mark? Are you an athlete competing in spite of your arthritis? Tell us in the comments below, and if you haven’t yet, make sure to join Racing for a Cure!