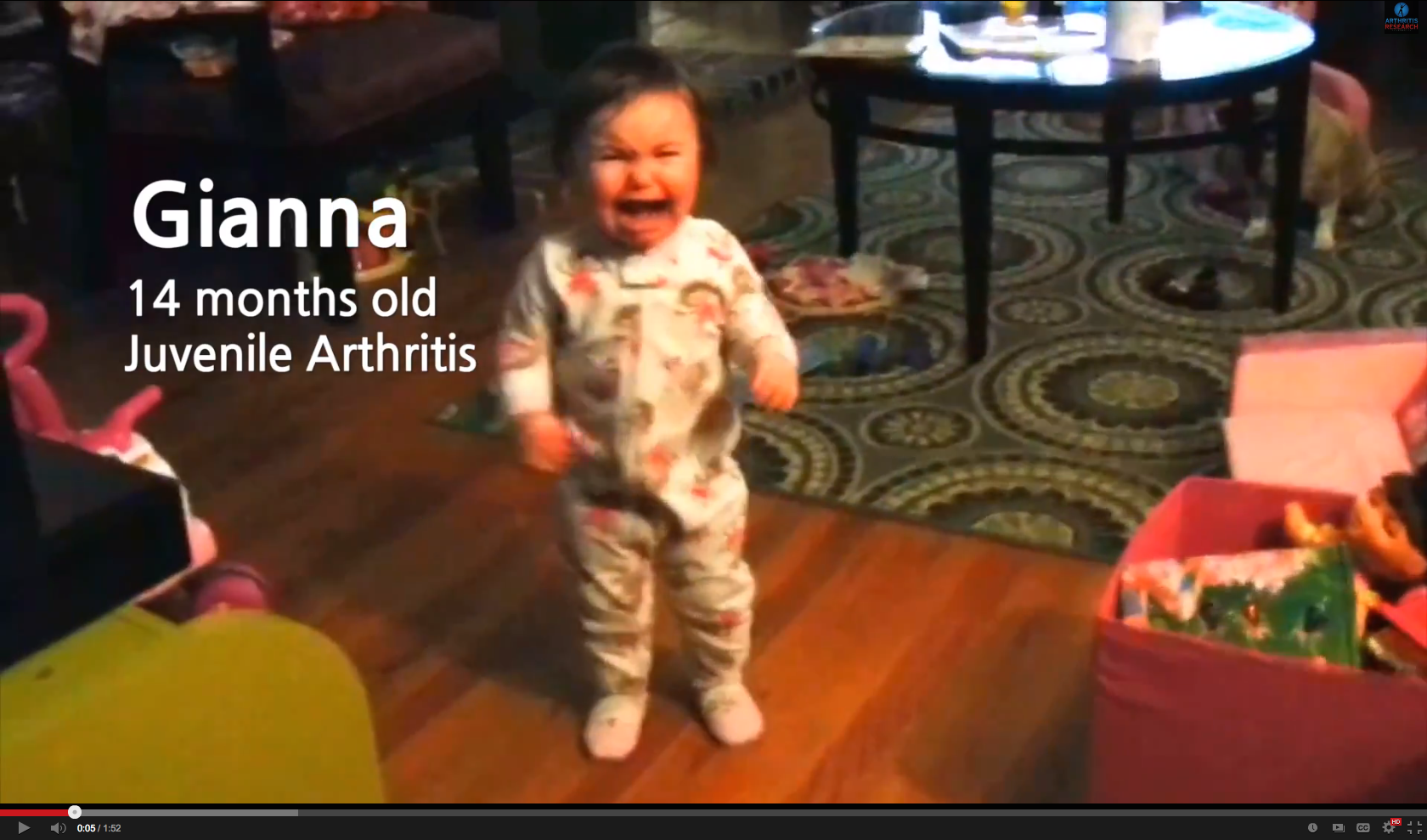 Posted at 12:26h in Juvenile Arthritis by ANRF 0 Comments
Share

The following was written by Tina Chiappetta, the newest Advisory Board Member of the Arthritis National Research Foundation. Touched by arthritis in a heartbreaking way, Tina joined the Board because her infant daughter, Gianna, was diagnosed with juvenile arthritis. Now she advocates for arthritis research on behalf of ANRF. In her story, she recounts how Gianna was first diagnosed and how she had to administer chemotherapy-grade drugs to her infant daughter.

Gianna began walking when she was 11 months old and was your typical toddler in every way. Every morning when she would wake up I would change her diaper and set her down on the floor where she would take off to explore the world around her.

But there was the morning when everything changed.

I set her on the floor as usual, but this time she collapsed. I helped her back up, but she instantly fell to the floor again. I tried to hold her hand and coax her to walk, but she began crying and refused to stand. I carried her to the living room and began to examine her entire body. I had no idea what was wrong with her. Had she fallen the day before and broken or sprained something? Had she been bitten by a spider during the night that was causing her pain? I knew something was wrong so I immediately scheduled an appointment to see her pediatrician that afternoon. As we were in the waiting room for the doctor, she miraculously began walking! She was limping, but was walking nonetheless. I was anxious to hear what the pediatrician would have to say about this odd behavior.

The pediatrician thoroughly examined Gianna from head to toe. He suggested that since Gianna had recently been sick, she could have what is called “reactive arthritis” or possibly Juvenile Arthritis. He ordered x-rays from her hip to her toes to rule out a fracture. The x-rays revealed nothing so he ordered a battery of blood tests. The tests confirmed that Gianna in fact had an extremely high level of inflammation in her body but he couldn’t say for sure if she had reactive arthritis or what was wrong with her. He referred us to a pediatric rheumatologist whom I spoke with the following day. She asked me to try to capture Gianna’s morning symptoms on film so she would be able to see her at her worst. We met with her the following week and after her physical exam, hearing my description of symptoms, watching the video and additional blood tests – she confirmed that Gianna had polyarticular Juvenile Idiopathic Arthritis – meaning she had arthritis in less than four joints, in this case, both of her knees.

The rheumatologist explained there were a few different options for treatment. We decided we would start Gianna on weekly injections (that I would administer at home) of a DMARD (Disease Modifying Anti-Inflammatory Drug) called Methotrexate. The following week I went into the doctor’s office where the nurse would instruct me on how to give my daughter injections. I was mentally prepared and went to the appointment as a student ready to learn. After my tutorial I practiced preparing and administering the injection into a stuffed animal. It was a piece of cake! But then it came time to prepare the actual medication that I would be injecting into my beautiful, innocent 14 month old baby. I saw on the prescription label “CAUTION: CHEMOTHERAPY DRUG – DISPOSE OF PROPERLY”.

I totally lost it. I was no longer able to hold it together for the sake of my daughter and husband. The reality that I was about to inject a chemotherapy drug into my baby rocked me to my core. I sobbed on the shoulder of the nurse I had only just met. She held me and told me it was all going to be okay. She assured me my daughter was going to be alright. I sucked it up, pulled myself together and gave my baby her first injection of Methotrexate.

After two months on Methotrexate and weekly physical therapy, Gianna had improved, but she was still having great difficulty walking. The doctor examined her again and saw that her arthritis had spread to both of her ankles as well as her knees. The doctor wanted to add a biologic drug. Within a week of Gianna’s first injection she was walking with ease and appeared to no longer be in pain. We call it our miracle drug and are so thankful our daughter can take this medication and live an otherwise “normal” life. She can walk, run, jump and even crawl – something she NEVER did before, not even when she was an infant.

Exactly one year after her diagnosis the rheumatologist has determined Gianna is in “medicated remission”, meaning that she displays no joints with active arthritis. After she maintains medicated remission status for one year, we will try to wean her off of the medication and hope she remains in remission.

Even though Gianna is in medicated remission, I still worry about her every single day. I wonder if the medications I am giving her today will impact her health in the future? Children have only recently been able to begin taking these medications so no one really knows the long term effects of the drugs on their developing bodies.

I wonder what will happen if her disease comes back later in her adolescence and is even worse? Will she be able to play sports or be a dancer if she wants? Will she be in too much pain to even attend school? I worry when I take her to daycare or gymnastics for fear of her being exposed to so many possible germs and illnesses. Her compromised immune system has a hard time fighting off infections and a simple cold can turn serious really quickly! The best I can hope for at this point is that her disease will remain in remission and when she flares – which she almost certainly will at some point – I am able to help her manage her pain and disease while still allowing her to live her life.

I recently posted the video I took for my daughter’s rheumatologist on my Facebook page. It shows Gianna in her pajamas unable to bend her knees to simply walk to me. You can hear the pain and desperation in her cry as she takes each step. It is very hard to share so publicly the pain my baby was enduring, but it is necessary for people to see what this disease really looks like. Over 100,000 people viewed that video in just four days. It is estimated there are 300,000 children living with Juvenile Arthritis in the United States. People need to know that even though our children often “look fine” there are days when they can’t even get out of bed on their own. I want all parents, doctors, teachers…everyone to be aware of Juvenile Arthritis. It is only with awareness that we will be able to raise money to fund research for better treatments and one day, a cure.

My two year old Gianna is my superhero…and I hope one day she can talk about JIA as a thing that no longer exists.