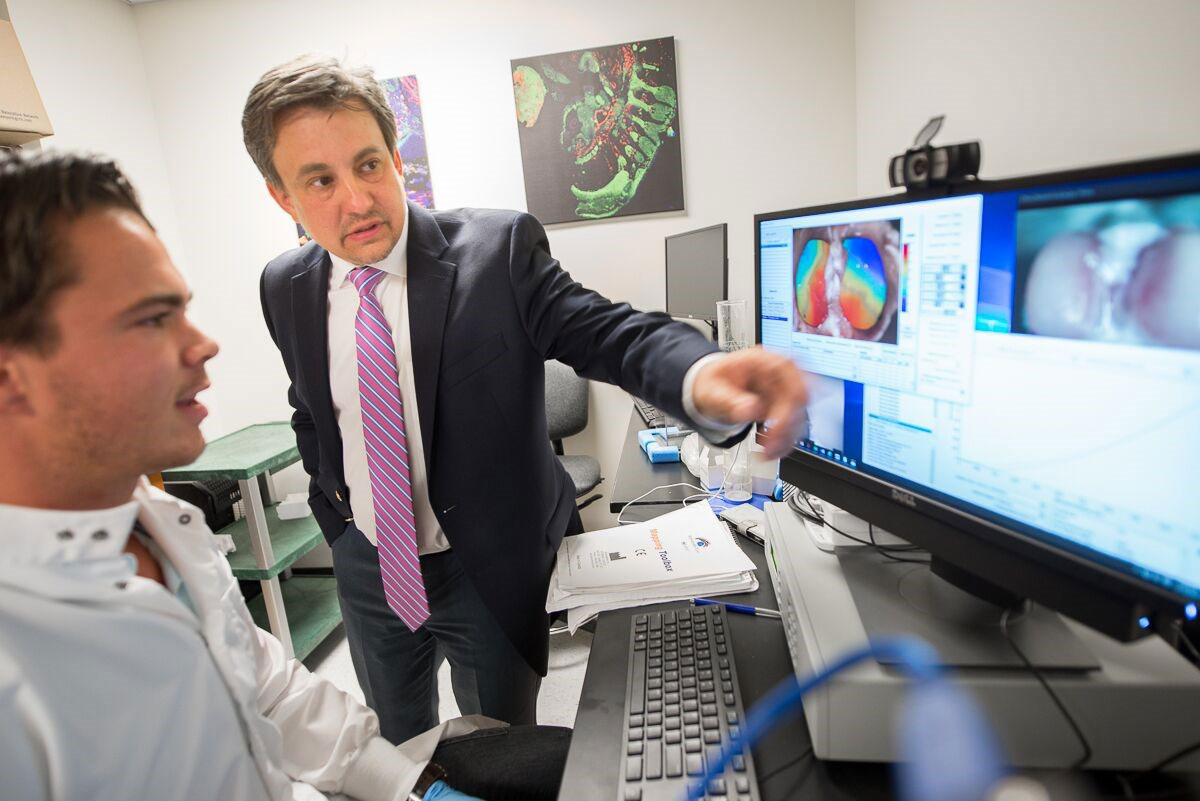 USC researchers’ unique approaches are making a difference for those with autoimmune diseases, which affect some 50 million Americans.

Approximately 50 million Americans suffer from autoimmune disease, according to the American Autoimmune Related Diseases Association. This includes the millions suffering from rheumatoid arthritis and lupus. Researchers at USC have developed novel small molecule drugs in regenerative and anti-inflammatory medicine that aim to provide relief and healing for patients with these diseases.

Leading this group of scientists is Denis Evseenko, USC associate professor of orthopaedic surgery and regenerative medicine and stem cell research. Evseenko, who is director of skeletal regeneration of the Keck School of Medicine at USC, and his postdoctoral scholar/research associate Ben Van Handel are collaborating to bring their technology to the marketplace and to in-need patients.

In pursuit of this goal, they created a startup company, CarthroniX. The drugs being developed by CarthroniX can currently be separated into two classes: one class is both regenerative and anti-inflammatory and the second is solely anti-inflammatory.

The first class of drugs selectively activates a regenerative pathway inside certain cells in the body, including cartilage cells, skin cells, and hair cells. When activated in this way, tissues that are not normally able to regenerate after injury, such as cartilage during arthritis or hair follicles during hair loss, are able to regrow. The second class takes an innovative approach to dealing with inflammation which would provide relief from common symptoms of rheumatoid arthritis and lupus, such as joint swelling and stiffness.

“Now, instead of using embryonic stem cells or artificial manipulation of adult stem cells isolated from patients,” he said, “we are able to propose a strategy where stem cells can be directly activated [inside patients], promoting repair of organs and tissues or enhancing biological processes, such as hair growth.”

The discoveries made by the CarthroniX team may lead to new treatments for a wide variety of diseases, including rheumatoid arthritis, osteoarthritis, lupus, and even hair loss.

CarthroniX’s newly discovered drugs to greatly reduce the symptoms of arthritis in rodents, and have successfully raised a seed round of investment. The group has also found strong collaborators at USC to investigate additional diseases where the drugs they discovered may be effective, including lupus and degenerative disc disease. Like many other biotechnology startups, their current challenge is to reach their goals as rapidly as possible with limited resources.

They offer two pieces of advice for other startups.

First, Van Handel said, “make sure you stay focused and raise enough capital to get you to your [key goals]. It’s a cash-intensive industry, but there are investors out there willing to take on the risk at an early stage.” Second, find industry-specific mentors and speak to them from an early stage.

CarthroniX is furthering its investigations into using their drugs to treat lupus, as well as continuing their rheumatoid arthritis research. The team has also successfully created a version of their drug that is topical — an ointment that patients simply rub into their skin. This topical formulation that is currently under clinical testing and has exciting possibilities for use in patients with hair loss and scarring.

This article was written by Emily Chu and it originally appeared on the USC News site at https://news.usc.edu/152179/innovators-of-usc-entrepreneurs-focus-on-autoimmune-disease/