“I Can. I Will. End of Story.” | Carmen Mata Joins Cure Arthritis Ambassadors 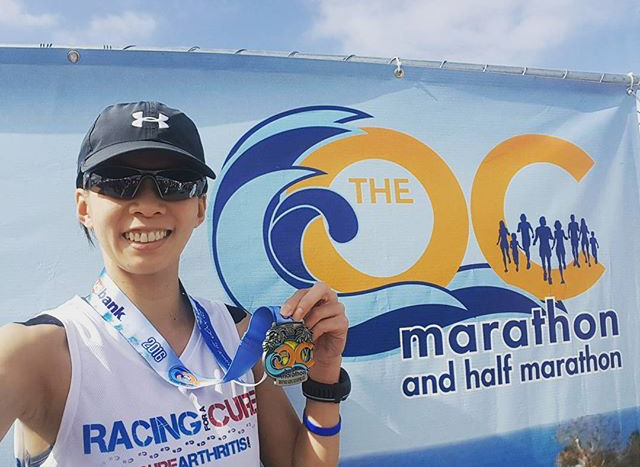 “I Can. I Will. End of Story.” | Carmen Mata Joins Cure Arthritis Ambassadors

Posted at 11:35h in Rheumatoid Arthritis by ANRF 0 Comments
Share

Our newest Cure Arthritis Ambassador, Carmen Mata, known online by her username, @Lil_RA_Warrior, is just that: A warrior. Through the course of her battle with rheumatoid arthritis (RA), she has run 21 half marathons, 4 full marathons, countless 5Ks and one ultra-marathon. She is no stranger to facing a challenge and she continuously inspires the RA community.

Carmen has suffered through arthritis related pain since she was a teenager. She initially chalked it up to injuries sustained from a car crash, then later, as a result from her demanding job at a bank. However, as Carmen got older, she could no longer ignore the pain. After an alarming trip to urgent care, the doctor suggested she visit a rheumatologist. She was officially diagnosed with rheumatoid arthritis in 2009 at the age of 36.

Carmen has been running since high school, but it wasn’t until she was officially diagnosed that she began to take her running to the next level. When others may have chosen to take it easy, Carmen did the opposite. “I started running and being more outspoken about this disease because of [my daughters]. One day, they both asked me, since my sister and I have it, will they have it too. I didn’t have an answer for them. That’s when I decided I had to do something. I had to show them that it was okay and that I will be okay and they’ll be okay if they do get it.”

She started off slow at first, working her way up to a mile after months of trying. Carmen set small goals for herself, taking the time to run at her own pace and listen to her body. Eventually, Carmen worked her way up to running longer distance and ran her first half marathon in October of 2012. It was at this first half marathon that she was introduced to Racing For A Cure and Cure Arthritis. While perusing around the race expo, she came across the Racing For A Cure booth, drawn in by its focus on arthritis research. “The lady at the booth talked to me for a little bit then gave me their jersey that they had on the table and I signed up. The rest is history.”

From that point on, Carmen has been a dedicated member of the Racing For A Cure team, raising awareness through her running and through social media. As a Cure Arthritis Ambassador, she hopes to change the public perception of arthritis. She wants the world to know arthritis is so much more than physical pain, but a multifaceted disease: emotional, exhausting, and stressful. She also aims to create a sense of community among others with arthritis, pointing out how isolating the disease can be. Carmen always offers a listening ear to those suffering; she never wants any patient to feel alone.

“Too many people in this world don’t do enough to help, but want results and when there are no results, they complain.” She states. “I want to help get those results and not just wait around. I have no room to complain if I’m not doing my part to help. My youngest daughter said my life’s mantra is ‘I can. I will. End of story.’”