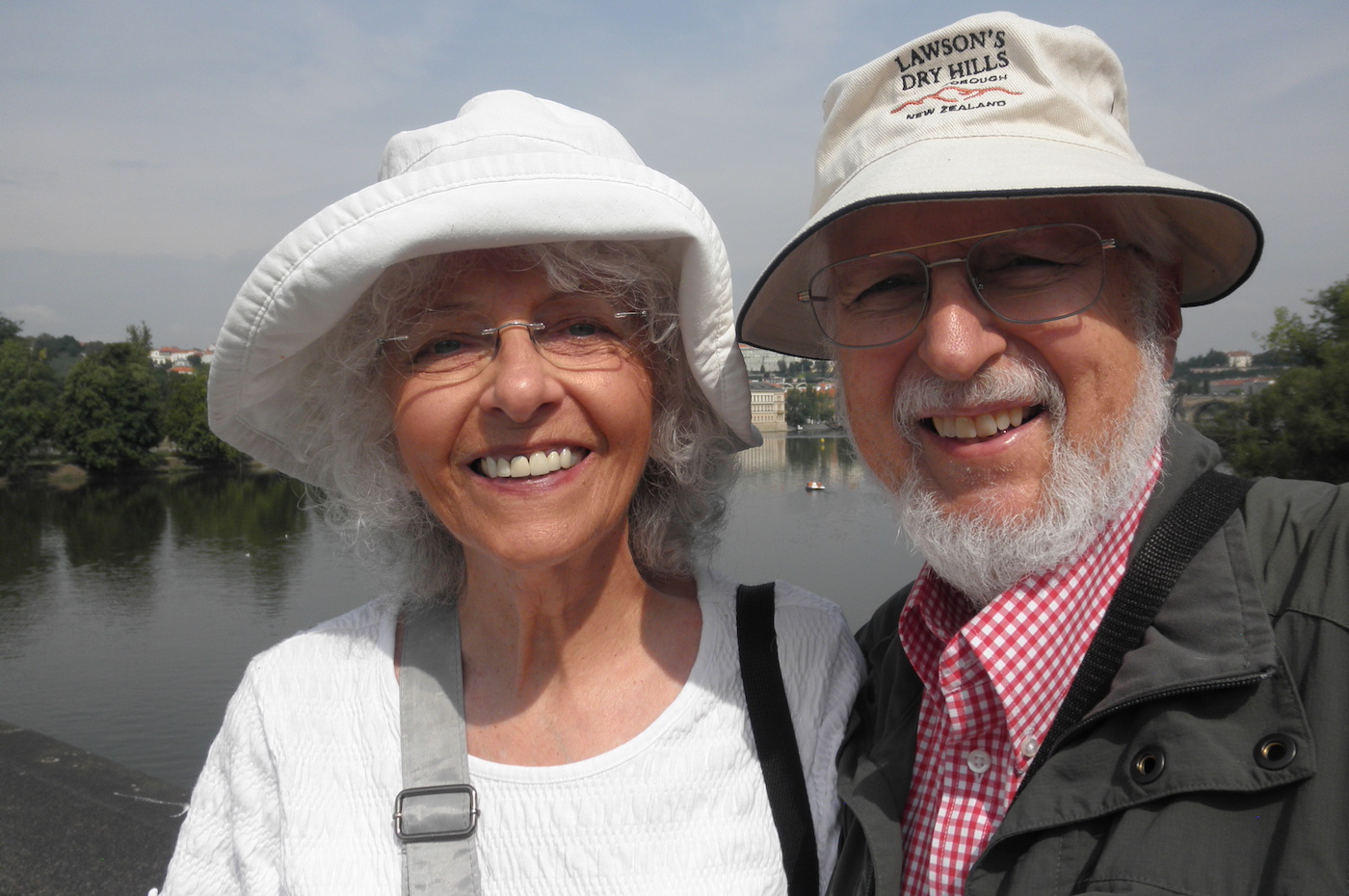 Posted at 14:30h in The ANRF Chronicle by ANRF 0 Comments
Share

As this issue of the chronicle focuses on the difference an individual can make in the fight against arthritis and other autoimmune conditions, we thought it fitting to use the opportunity to thank someone who met her challenges head on and whose generosity will ensure she continues to help others. Deanna La Camera was a loving wife, mother and advocate for herself and others. The following expose looks at her life with her husband Joe, their family and their approach to living a full life.

Deanna and Joe met at the University of Colorado in 1965. Joe was the head resident at Willard Hall where Deanna and Don, her first husband, resided. The three soon became fast friends, a friendship that was maintained over distance and time.

Deanna then worked as a librarian in the Boulder School system while Joe moved to Ohio to pursue his career, taking on the position of director of housing at Kent State University for a number of years. The friends still kept in close touch.  After first-hand experience of the shootings in 1970, he decided to return to Colorado feeling he had been away from his friends and the state he loved long enough. On his return Deanna and Don welcomed their friend into their home, giving him the support and the encouragement, he needed to heal.

Shortly after returning from a month-long trip abroad with Don it was with great joy that Deanna found out she was pregnant. During preparations for their new arrival the couple was dealt a devastating blow, Don had been experiencing some medical difficulties and received a diagnosis of late stage cancer of the lymph system. Deanna went into labour whilst Don was in hospital. Joe was there to support both Deanna and Don through this trying time which was both joyous and heart breaking, the beginning and the end of a life.

Six months after the birth of their son, Don lost his battle with cancer. Deanna, her new son Don, and Joe became inseparable, relying on their friendship to pull themselves through this most difficult time. A love with a bond born out of joy and sadness developed between Deanna and Joe. They cemented this bond by marrying in 1972, a marriage that was to span 46 years.

Even though Deanna had faced such a tragic loss she continued to build a life for herself and her son, all with the support of Joe and her friends. During his early childhood Deanna chose to stay home and raise Don. Perhaps not unexpected from a woman who had shown such strength, she also completed an advanced degree as a reading specialist from Akron University (where Joe was positioned) during this time.

Deanna was vibrant and had a zest for learning and travel. During these years the family travelled together to many parts of the United States and Canada including back to Colorado almost every year, a state they loved and hoped to return to one day to raise their son. During one such trip Deanna was offered a position in Colorado as a first-grade teacher. Together the couple decided that even though Joe was committed to the University of Akron, Deanna would accept this position. For the next three years the couple commuted back and forth until Joe secured a position as a counselor in the same school district. The next twelve years passed with the couple raising their son, travelling, attending lectures and spending time with their extensive group of friends.

Never ones to let grass grow under their feet, just after retiring in 1992 Joe and Deanna accepted positions with The American School Foundation in Monterrey, Mexico.  Deanna as a first-grade teacher and Joe as a secondary school counsellor.  They worked and continued to travel extensively in Mexico and Texas before returning to Colorado in 1995.

Embracing this experience, they accepted another two-year contract but this time with the Lincoln School in Kathmandu, Nepal. Deanna again as a first-grade teacher and Joe as director of student services.  Joe looked to Deanna as a mentor for the younger students, guided by her experience with pre-school and elementary school children. “She was wonderful.  With her I could not fail.” We should all be so lucky as to find a partnership that allows us to feel the same. Although unable to ask her, I am sure from having written of their life together, that in much the same way, Deanna drew strength from Joe. Their partnership and family giving her an astonishing reserve of strength from which to draw.

Returning home after their contract Deanna began experiencing pain in her legs and hands. After receiving unsatisfactory answers from her doctor, she started to research potential causes. After six months in which Deanna persevered, advocating strongly for herself, she was eventually referred to a specialist. It was at this point she was diagnosed with rheumatoid arthritis (RA). Undeterred by her diagnosis she took on this new challenge, diligently following the doctor’s recommendations with regards to diet, exercise and treatment. Her full life up to this point inspired and motivated Deanna to keep moving forward, she was simply determined to do everything in her power to get better. Deanna kept trying combinations of medications, never giving up, and finally finding success with a Remicade infusion. This treatment along with her unfailingly positive attitude allowed the couple to continue to live their life as they had always done – embracing all the adventures that came their way.

Unfortunately, the respite was not to last and in 2008 the treatment stopped working. Deanna’s health declined to the point where she needed a walker and the couple considered the possibility of having to move her into a care facility. But Deanna didn’t give up.  After a couple of difficult years her RA doctor approached her, suggesting she may be a good candidate for an experimental treatment of Actemra. Deanna faced this challenge head on, deciding to try it, luckily with success and within a few months improving to the point of resuming normal activity.

Deanna then found ANRF, reading all the literature ANRF provided and contributing her own ideas and sharing her experiences. Often the couple would also share what they had learnt with her doctors, Drs Perkins and Lutt, from the Colorado Center for Arthritis & Osteoporosis who had walked the long road of RA with the pair.  The information from ANRF was invaluable and Deanna wanted to ensure the help she received via this organisation could continue and provide for others.

Joe was kind enough to share Deanna’s last great battle, truly showing the extraordinary woman he had spent his life with. At the end of November 2018 Deanna was diagnosed with cancer, it was sudden and relentless in its attack. Deanna was unable to tolerate radiation or oral chemotherapy. After a stroke in January, she decided not to continue with treatment. Bravely she asked Joe to take her to their home, so that she could spend her remaining time with her family. Their son Don and daughter-in-law Angela made it home from New Zealand to be there with Deanna and Joe. “We brought her home on January 20th, and she died with me on the 23rd, no pain, and at peace.  I can’t write any more. My heart is broken.”

These heartfelt words embody a love that was inspiring, generous and encompassing, leading to a life lived consciously, proactively and bravely to the very end. A life shared, through the joy and the sorrow with Joe, their son Don and the many family members and friends that were touched by Deanna’s life. Even in passing Deanna was generous in spirit, kindly leaving a bequest to ANRF, an organization with which she developed a strong connection.  We at ANRF would like to acknowledge how much she gave back, to the foundation and the many other patients she encouraged to not to give up.

“In my heartfelt and moving conversation with Joe after Deanna’s passing and interactions with the family in New Zealand, specifically Angela, Deana’s daughter-in-law, I came in awe of their unique blend of compassion and courage”. said Dr. Zaher Nahle, CEO of ANRF. “We will continue to honor Deanna’s legacy by conducting advanced research and sharing the latest news in research with the community, just the way Deanna liked it”

In sharing her story, we would like to honor the remarkable woman she was and hope that in death, as in life, Deanna will continue to inspire, giving strength to those that still face their own journey with chronic illness. We would like to offer our condolences to Joe, Don and all those lucky enough to have counted Deanna as their friend.