Developing a Thick Skin – The History of Scleroderma 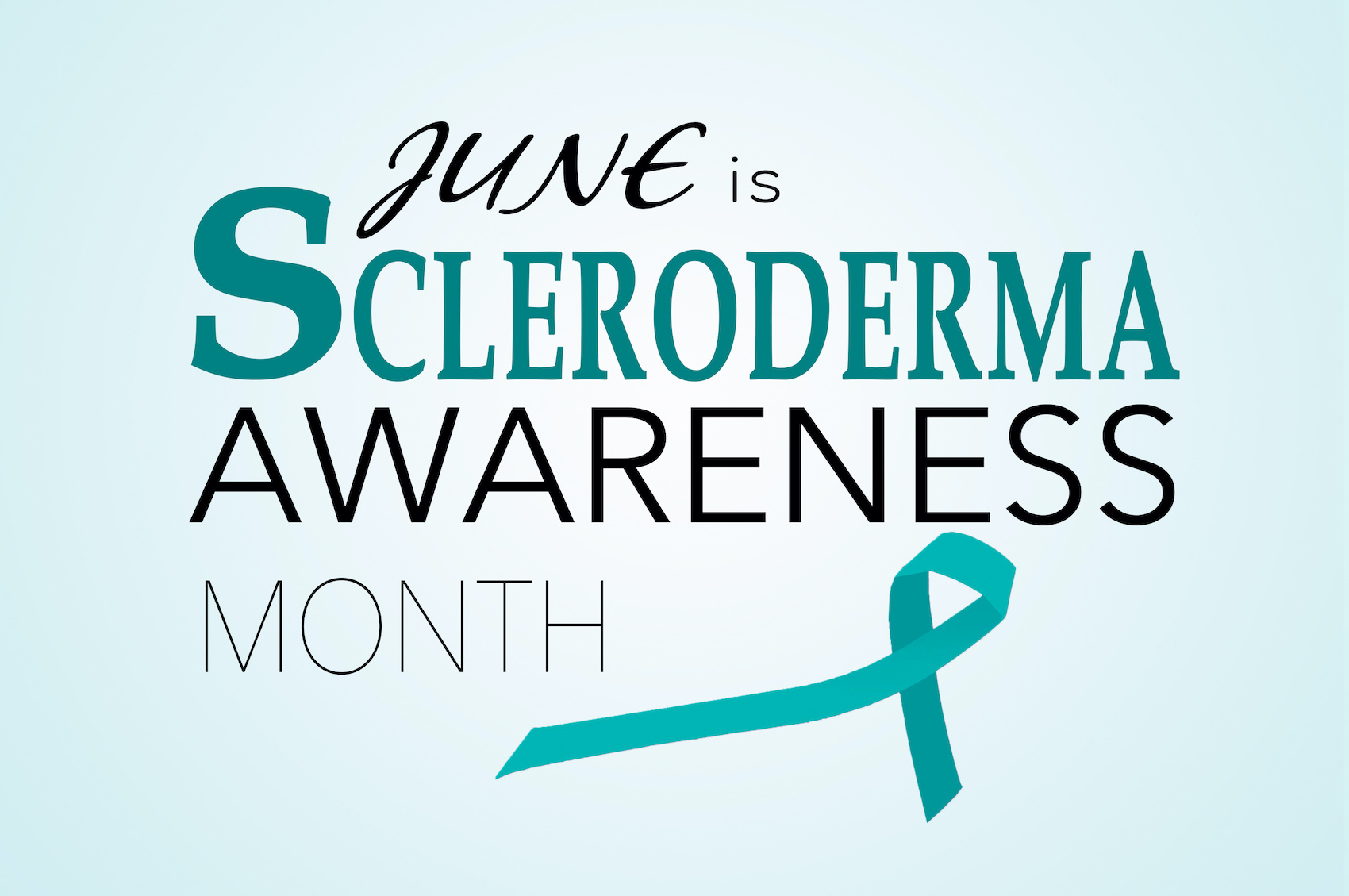 Developing a Thick Skin – The History of Scleroderma

Posted at 14:46h in Scleroderma Research, The ANRF Chronicle by ANRF 0 Comments
Share

Scleroderma is an autoimmune condition that can result in changes to the skin, blood vessels, muscles and internal organs. The most common symptom is thickened skin, but other symptoms include stiffness, fatigue, and poor circulation in the fingers and toes with cold exposure. The underlying mechanism involves the abnormal growth of connective tissue which is believed to occur as a result of the body’s immune system attacking healthy tissues. Diagnosis is normally based on a person’s symptoms and may be supported by a skin biopsy or blood tests. The cause remains unknown and there is no cure, but treatments are available that can greatly improve symptoms and quality of life for patients. Although only officially named in the nineteenth century, Scleroderma has a long history. Descriptions of patients with tell tale symptoms date back as early as 400 BC. In early years, rare complications and differing presentation of symptoms led to misdiagnosis and confusion with diseases such as leprosy.

Hippocrates, the Greek physician considered the father of medicine, was the first to describe an illness which resulted in thickening of the skin. It was only centuries later, in the 1700s, when a detailed description of the condition was presented. An Italian doctor, Carlo Curzio, treated a patient whose symptoms he described as hard, wood-like skin. Admitted to hospital under his care, the patient displayed further symptoms including tightness of skin in multiple areas, tightness of the area surrounding the mouth, and hardness on the neck. Treatments at the time were limited to warm milk and vapor baths, being bled from the feet, and low doses of quicksilver. These were quite effective returning the skin to a far more normal condition and increasing flexibility within a year.

The term, scleroderma was coined by Giovambattista Fantonetti in 1836. He used the term to describe a patient that had dark, leather-like skin and reduced joint mobility from tightening of the skin. Purging, ingesting dulcamara (bittersweet), and bathing in cicuta water (hemlock) softened her skin. Remaining hardness in her legs was treated with leeches and mercurial ointment. After three months of treatment, “all parts of the skin were soft and of the natural color, with the exception of that of the right leg.” With her rather miraculous cure, it is questionable whether diagnosis of scleroderma was in fact correct. Therefore, although Fantonetti was the first to use the term scleroderma to designate a disease in an adult, it is unlikely that they had the disease known today as Scleroderma. 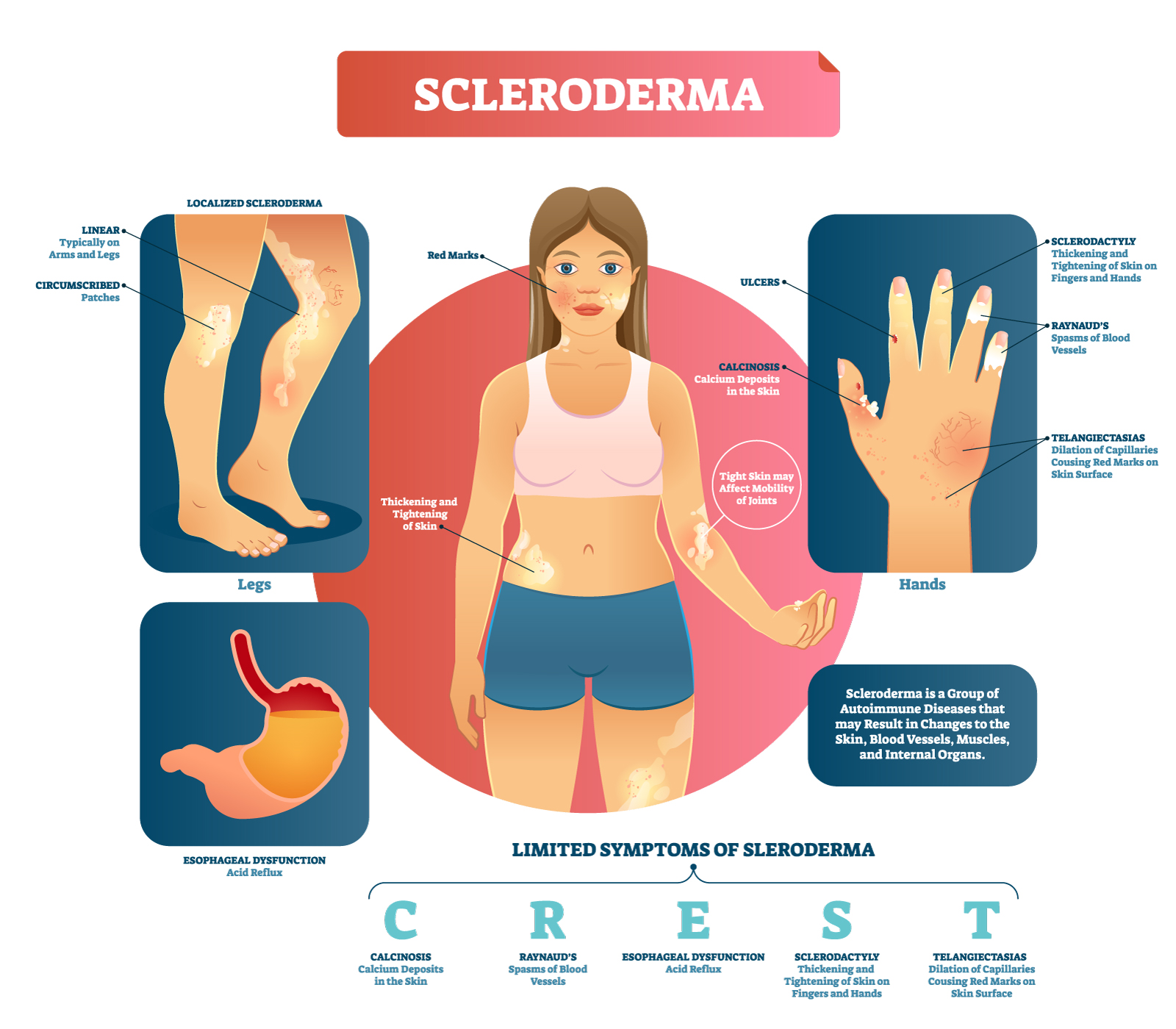 Not Only Skin Deep

In the US, the first account of Scleroderma was recorded in 1869 by Abraham B. Arnold. A 52-year-old man developed a cough followed by skin hardening on his hands and feet. Hydrotherapeutics resolved hardening of skin on the arms but not the hands and the feet. Administration of potassium and iodide had no effect. Recognition of the condition increased and, by the late nineteenth century, the systemic manifestations of the disease had been noted.

In 1945, a South African, Robert Goetz, proposed that the name Scleroderma be discarded and be replaced with progressive systemic sclerosis as it was more descriptive and reflected the systemic nature of the condition. However, Scleroderma has continued to be the preferred and most widely used term. In 1980, the American College of Rheumatology agreed on diagnostic criteria for the disease. Today, Scleroderma is a well-defined condition recognized for having both cutaneous and systemic manifestations.

As with other autoimmune conditions, the 20th and 21st centuries saw large strides being made in the categorization and treatment of Scleroderma.  By the 1950s, the modern understanding of autoantibodies and autoimmune diseases started to spread. Treatment has therefore been able to move from mostly palliative with symptom relief and quality of life being the goal to immunosuppressive and anti-inflammatory with the goal for many conditions often now being remission. In addition to new treatment options, new techniques are used to assess the severity of the disease and the effectiveness of treatments. In the past, Scleroderma treatment trials used the modified Rodnan Skin Score as an outcome measure which strictly measured skin thickness. Researchers felt this only addressed one aspect of the condition and did not sufficiently give an accurate picture. Therefore, a very recent step in Scleroderma research was the development of the American College of Rheumatology Provisional Composite Response Index for Clinical Trials in Early Diffuse Cutaneous Systemic Sclerosis, or ACR CRISS, in 2016. This system took into account heart, lung, kidney and skin involvement. The index calculates the probability of patient improvement after one year of treatment. This allows future treatments to be accessed in depth, better illustrating their effect and better determining which treatment is most suitable for which patients.

The standardized approach to diagnoses and research assessment will allow researchers to build upon the work of others, further advancing the understanding of Scleroderma and putting a cure for this long enduring disease at reach.