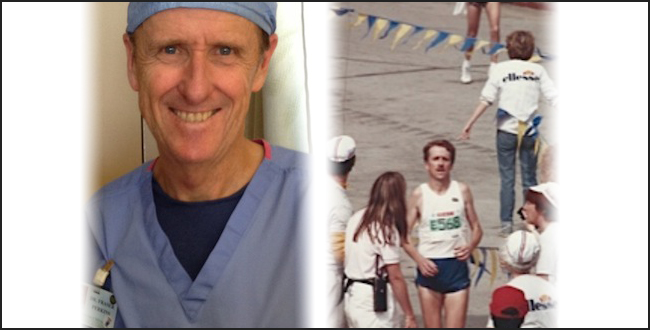 Posted at 10:31h in Racing For A Cure by ANRF 0 Comments
Share

At 65 years of age, Dr. Fraser Perkins doesn’t fit the typical mold for what someone thinks of as a marathon athlete. However, he’s proving that everything gets better with age as he is set to compete in his fifth marathon this year in Boston. After earning an overall time of just over four hours at the Huntington Beach Marathon, in California, he qualified to run in Boston and decided it was the perfect opportunity to help and give back; specifically to arthritis research.

Support Dr. Fraser and kids with juvenile arthritis by making a donation to his campaign today!

Dr. Perkins is a friend of Arthritis National Research Foundation (ANRF) Board Member, Christine Schwab, who pioneers her famous Facebook page, Christine’s Kids, raising awareness of juvenile arthritis. When Dr. Perkins learned of Christine’s project, he decided to join the Racing For A Cure team in an effort to raise money for juvenile arthritis and support his friend’s cause.

“When I started Christine’s Kids over a year ago on Facebook my goal was to offer hope and positivity to kids and their families and raise awareness for their misunderstood disease,” Schwab said. “Because I lived with Rheumatoid Arthritis for over 20 years I understood firsthand the struggles and pain these kids experience living with Juvenile Arthritis. When the offer came from Dr. Fraser to use his Marathon running to help create awareness and a cure for these special kids, it touched my heart.”

Dr. Fraser Perkins will run the Boston Marathon for juvenile arthritis on behalf of Christine’s Kids and ANRF!

“As an anesthesiologist, I have cared for many patients with rheumatoid arthritis over the years,” Dr. Perkins said. “I know first-hand many of the side effects of the potent medications to treat RA, so I appreciate what a tough time kids with juvenile arthritis have.”

Dr. Perkins embarked on his first marathon in 1988 and continued to run between ten and twenty miles per week, casually, for years. Four years ago, he re-entered the world of competitive running when a colleague asked him to run in the LA Marathon. It was then that he was again bitten by the running bug.

In addition to the health benefits that running offers, like cardiovascular fitness, weight control, and muscle toning, Dr. Perkins enjoyed running for years because of the camaraderie it offered him with fellow runners. Running for ANRF, however, offered a whole different level to the sport.

“[Having] the ability to use my healthy joints on behalf of kids who will never have normal joints appeals to me,” he added. “My life would have taken a much more somber and limited path had my outdoor activities been curtailed by joint disease.”

Running the Boston Marathon is something Dr. Perkins is looking forward to as well. It will mark the first anniversary since the tragic bombing last year at the event, so he suspects support will be high with runners and non-runners alike, which will hopefully cause Boston to celebrate even more. 14,000 runners will be competing in the event on behalf of a designated charity while 22,000 runners have qualified based on their performances in prior marathons.

“He understands the medical hardships of children with JA,” Schwab continued. “Dr. Fraser and I talk the same language, give back and make a difference because every child deserves a childhood.”

Dr. Perkins is thrilled to be running for the Arthritis National Research Foundation and to support juvenile arthritis research and awareness through Christine’s Kids. The Boston Marathon will commence on April 21st.