Getting Under Your Skin – The History Psoriatic Arthritis (PsA) 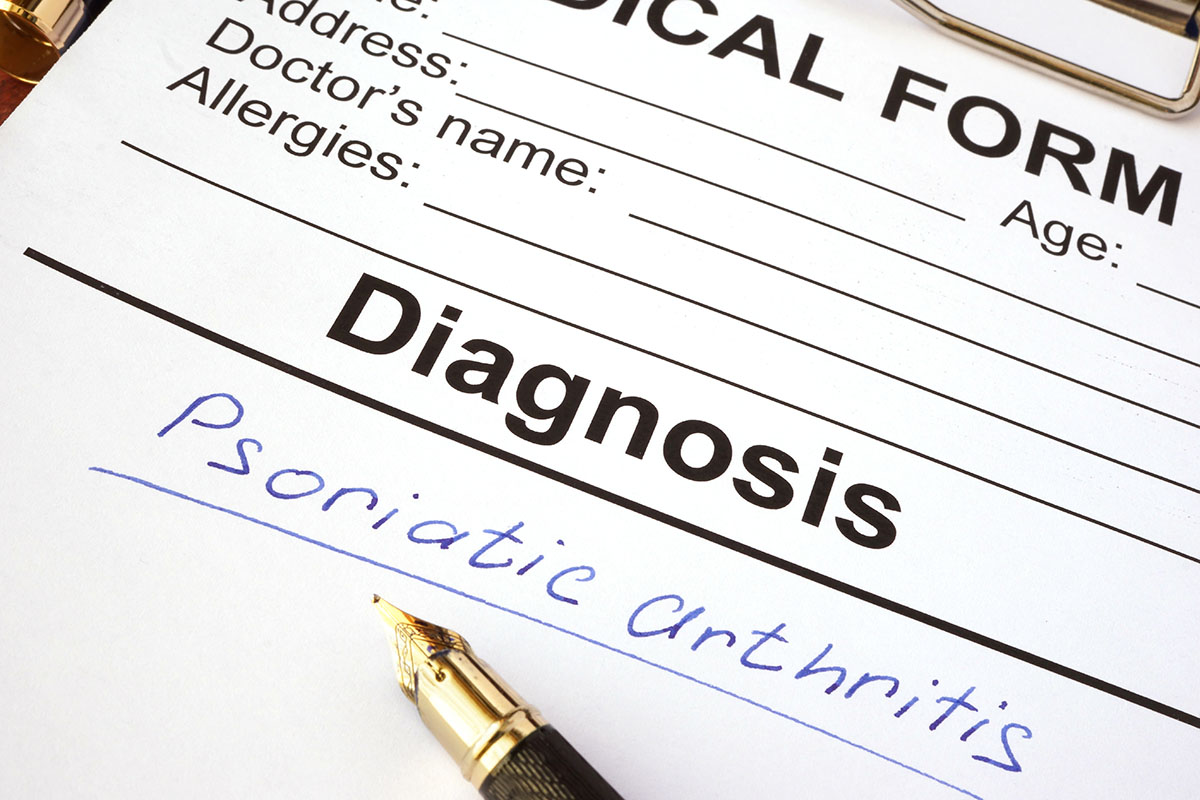 Getting Under Your Skin – The History Psoriatic Arthritis (PsA)

Psoriatic Arthritis (PsA) is a musculoskeletal condition associated with the autoimmune disease psoriasis. Classic features of the condition include severe swelling of digits frequently occurring in association with changes to the nails on these digits. Nails can become pitted, thicker, and can detach from the nail bed. The red, scaly, itchy plaques associated with psoriasis often present before the onset of PsA. Patients may also suffer bouts of severe exhaustion that does not abate despite rest. The vast majority of PsA patients (around 85%), develop psoriasis before PsA.

PsA affects around 30% of patients with psoriasis. It occurs in both children and adults and (unusually for an autoimmune condition) affects men and women equally. There is no definitive diagnostic test for PsA. The symptoms closely resemble those of other conditions such as rheumatoid arthritis so a specialist physician is key in making a diagnosis. There are a number of factors that such a physician will consider in making the correct diagnosis. These include psoriasis in the patient, a family history of PsA, a negative test for the rheumatoid factor as part of excluding an RA diagnosis, arthritic symptoms in the joints closest to the tips of the fingers and radiology indicating degenerative joint changes.

A Disease of the Ages

This is by no means a new condition. Signs of the disease are present in ancient Egyptian mummies. The ancient Greeks coined the term psora, meaning to itch. Hippocrates, the father of modern medicine, prescribed the use of tar and topical arsenic as a means to treat the disorder which bewildered many of the top medical minds of the time. Half a millennium later, the renowned physician Galen categorised it as a skin disease and coined the term psoriasis. In addition to applying arsenic he suggested using a broth in which a viper had been boiled. Together with many other skin conditions, it was originally thought to be contagious. In medieval Europe the stigma associated with it was extreme, patients experienced isolation and shunning and were forced to ring a clapper to advise others of their arrival. 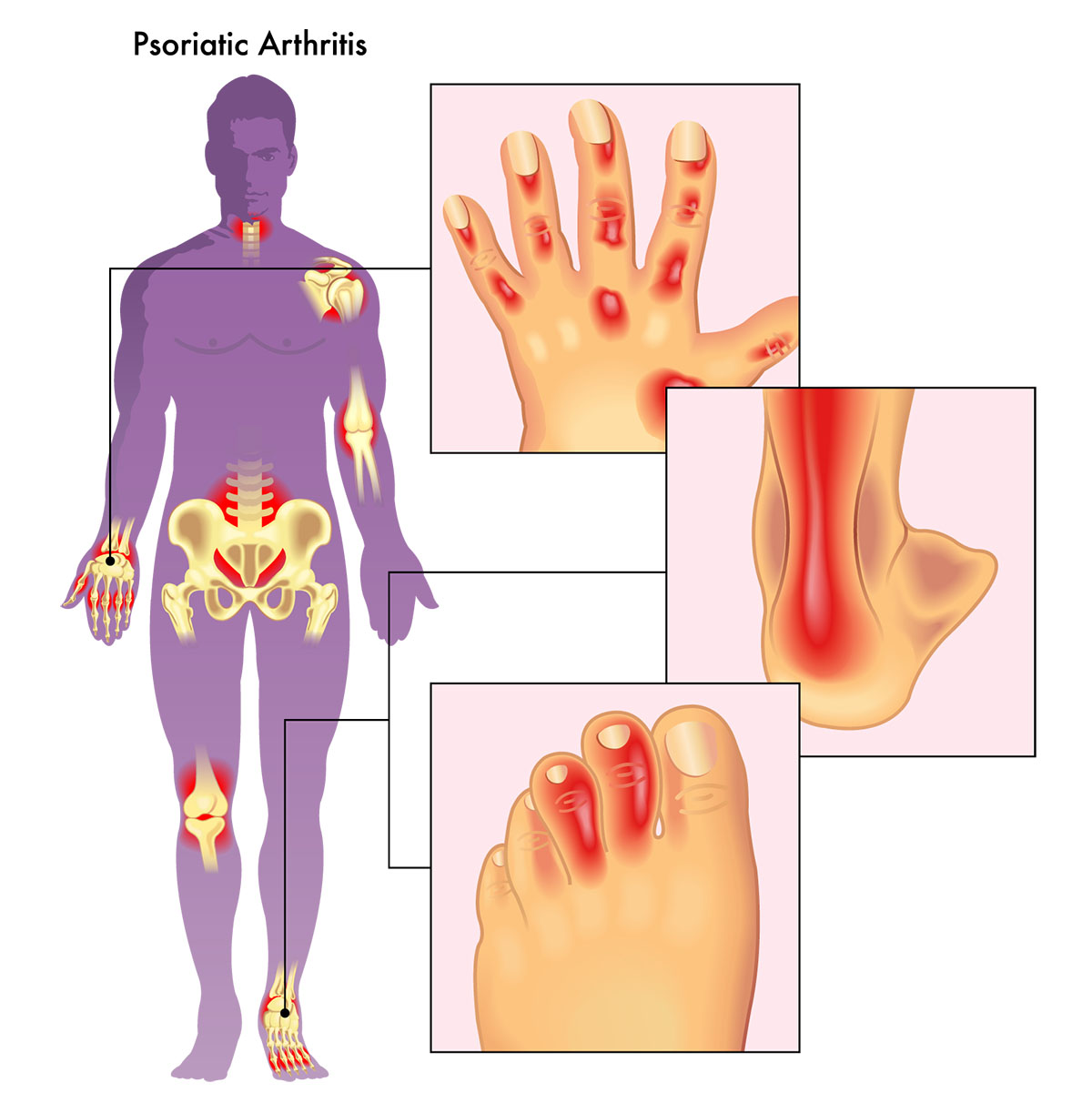 The Modernization of PA Treatment

Pre-19th century causes of such conditions were attributed to poor nutrition, imbalances in the blood, poor hygiene, allergies and malfunctioning internal organs. Treatment was not only unsuccessful but could be damaging due to harmful or toxic ingredients like sulphur and mercury.

In 1818, French physician Jean-Louis-Marc Alibert became the first to report an association between psoriasis and arthritis. In 1836 Henry Daggett Bulkley opened a dispensary in New York to treat psoriasis and other dermatological disorders. In 1840 Dr Ferdinand von Hebra, the founder of modern dermatology, finally eliminated the word “lepra” from the clinical description of psoriasis, finally separating it from leprosy. And in 1860, the condition was finally given a name, “psoriasis arthritique,” by another French physician, Pierre Bazin.

The 1960s saw psoriasis being investigated as an autoimmune condition for the first time with PsA identified as a separate clinical entity. A shift in treatment approach occurred in the next decade based on a better understanding of the mechanisms underlying the condition. Options included topical creams and ointments, laser and phototherapy and systemic oral and injectable immune suppressants such as nonsteroidal anti-inflammatory drugs (NSAIDS) and disease-modifying antirheumatic drugs (DMARDS).

NSAIDS are generally the first port of call in PsA treatment. These drugs can irritate the stomach and intestines eventually if used long term potentially leading to gastrointestinal complications. Certain NSAIDS lower the risk of such bleeding but increase the risk of myocardial infarction, heart attack or stroke. A number can also lead to kidney damage. Adverse side effects will need to be monitored by treating physicians.

DMARDS tend to be used in persistent symptomatic cases without exacerbation. This class of drug helps to limit the amount of joint damage caused by PsA. DMARDS act slowly–it is often weeks or months before they take full effect. Like other immunosuppressant drugs, these can reduce symptoms, but they can also lead to liver and kidney problems and an increased risk of serious infection. The Human Genome Project in the 1990s inspired the search to identify genes linked to the condition.

The most recent class of treatment is biologics, these are biological response modifiers that are developed using recombinant DNA technology. These medications are derived from living cells cultured in laboratories. Unlike DMARDS, which suppress the entire immune system, biologics are more targeted and only affect parts of the system. Although less likely than NSAIDS or DMARDS, biologics can still lead to minor or serious infections and rarely could be associated with nervous system disorders, blood disorders and some forms of cancer.

Dawn of a New Day in Treatment

A new class of treatment was approved by the FDA in 2014. A phosphodiesterase inhibitor. This drug prevents the breakdown of an enzyme which in turn down regulates pro-inflammatory factors and up regulates anti-inflammatory factors. Side effects can include headaches, nausea, diarrhoea, fatigue, upper respiratory tract infections, depression and weight loss.

In the 21st century, progress has been made in identifying genes that play a role in PsA, including HLA-B27. This provides novel targets that will hopefully lead to improved treatment options with higher levels of success and lower levels of side effects.

Large strides have been made in how this disease is viewed and treated. Treatment has shifted to focus on the individual needs of a patient. Treatment is looking to become personalized, vaccines formulated from a patient’s own immune cells. The search is on-going by researchers, physicians and educators alike, trying to find the switch that turns off this and other autoimmune conditions.