Immunity and Inflammation in Rheumatoid Arthritis 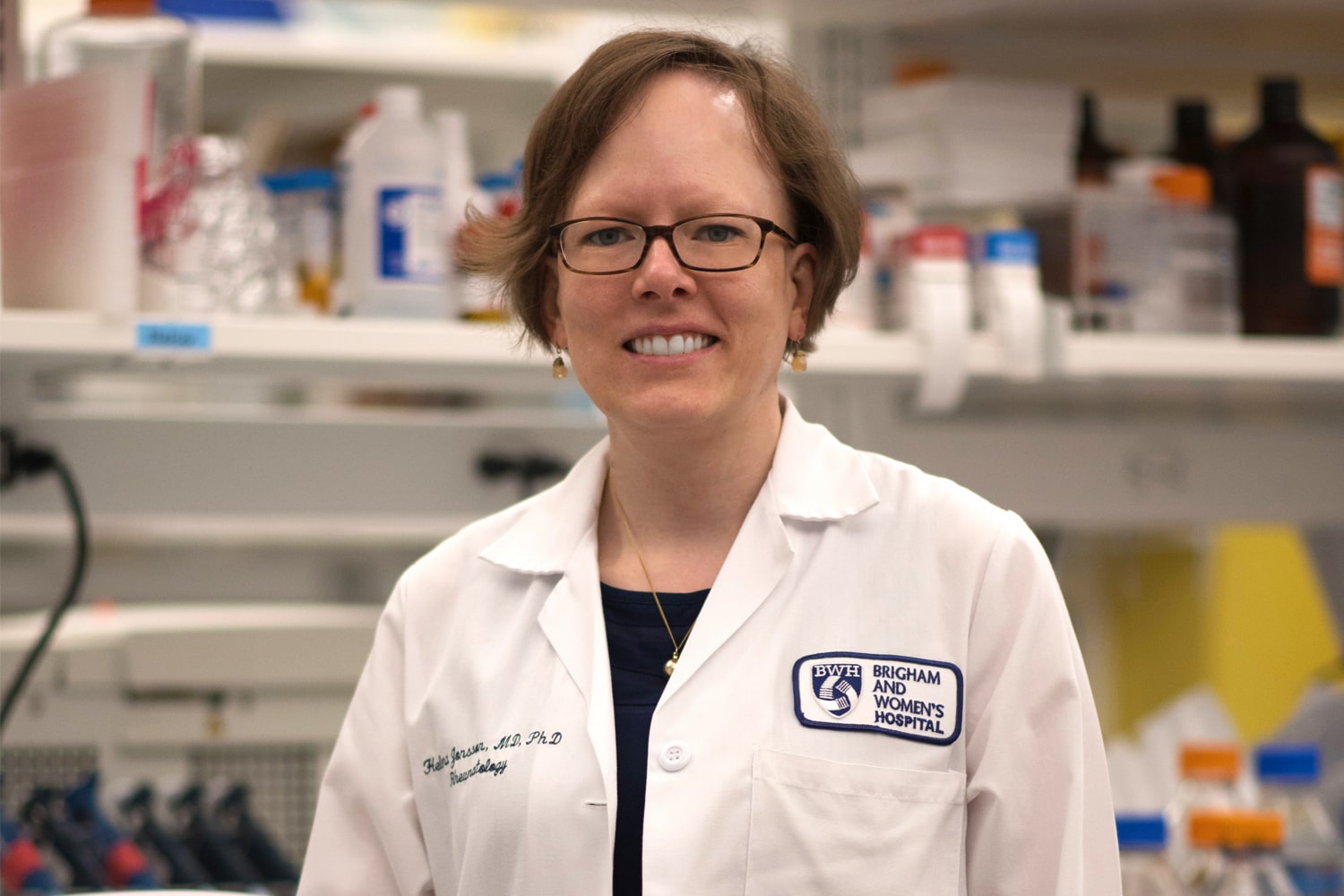 Immunity and Inflammation in Rheumatoid Arthritis

The foundations of a rheumatology researcher…

As a young child, Anna Helena Jonsson, MD, PhD,  was close friends with a girl who had juvenile idiopathic arthritis. As she grew up, this was not in the forefront of her thoughts but once in college this early experience contributed to the development of an interest in immunology. A well taught college course led to a fascination with the immune system and a desire to learn more about how the cells that make up this system move and interact throughout the body to promote and maintain our overall health. Autoimmunity –  how the immune system becomes activated in inappropriate circumstances, potentially resulting in disease – was what caught her attention the most. Her goal in applying for her graduate school studies was to become a rheumatologist and researcher, allowing her to not only learn about the field but contribute greatly to it as well.

Bridging the divide from student to faculty…

The transition from post-doctoral work to faculty is critical in a researcher’s career path. In the current research climate where funding is often a limiting factor, it is at this point that many researchers are forced to leave academia. Dr. Jonsson believes that the support she received from ANRF early on in her research career meant that she was able to continue to contribute to this field of research in a very meaningful way.

“Receiving the grant felt like a big vote of confidence from a team of established arthritis researchers, their support showed me that I am on the right track and will successfully navigate through this transition.”

Receiving this grant has been beneficial in numerous ways, both directly for Dr. Jonsson’s research but also in a broader sense, by demonstrating to rheumatology fellows and young physician-scientists in the Division that funding opportunities exist, that they should not give up on their own dreams of continuing to do research in the dynamic field of rheumatology. The following outlines the research Dr. Jonsson has been able to undertake in her capacity as an ANRF fellow.

Much of the research surrounding rheumatoid arthritis (RA) focuses on CD4 T cells, a type of white blood cell that helps to coordinate the immune system’s response to infections and other attacks. CD4 T cells are responsible for the production of cytokines and other compounds that transmit signals to other parts of the immune system. Far less investigation has been undertaken looking at the potential role of CD8 T cells in RA, even though they are found in large numbers in inflamed joints in RA and produce many of the same cytokines as CD4 T cells, indicating that they too may have an important role.

Based on this, Dr. Jonsson began researching CD8 T cells and their possible link to RA two years ago. The first step the team took was to examine blood samples. Interestingly it was found that blood from RA patients contained an expanded CD8 T cell population that expressed CCR2. CCR2 is also known as a chemokine receptor, a protein on the surface of certain cells in the immune system that directs the cells to travel to certain places in the body. CCR2 is a receptor for CCL2 (also known as monocyte chemoattractant protein-1 or MCP-1), which is produced at sites of inflammation, such as tissue injury, infection, or inflamed joints in RA. In other words, the CD8 T cells that Dr. Jonsson found may be on their way toward inflamed joints in these patients with RA.

Following this discovery Dr. Jonsson and her team studied synovial fluid, a viscous fluid found in the cavities of synovial joints (bones connected by a fibrous joint capsule). In a healthy joint, the primary role of synovial fluid is to reduce friction between the articular cartilage of synovial joints during movement, but in rheumatoid arthritis and other types of autoimmune arthritis, the synovial fluid fills up with inflammatory cells and compounds. It was found that there were several connections between the CCR2+ CD8 T cells discovered in the previously mentioned blood samples and the largest population of CD8 cells in inflamed joints in RA, determined by analysis of the synovial fluid and tissue samples. A key finding was that both populations express a protein that can activate other cells, such as fibroblasts, to make inflammatory molecules. This protein is called granzyme K, which up to this point has received very little attention in the field of arthritis and autoimmunity.

The role of CD8 T cells and the associated protein, granzyme K, in autoimmune arthritis has thus far been under appreciated and under researched. Dr. Jonsson hopes that by employing a number of research techniques such as flow cytometry, ELISAs, ROS assays, and RNA-sequencing studies and by contributing skills and data to programs such as the Accelerating Medicines Partnership (AMP), she will be able to uncover new mechanisms of inflammation that could be potential therapy targets. Her involvement in AMP aligns well with the ANRF policy of collaboration, a key objective of AMP is to generate pre-competitive, disease-specific data that will be publicly accessible to the broader biomedical community for further research, thus allowing those with common goals to benefit from sharing new discoveries.

This is critical as there are a number of patients with RA, psoriatic and other forms of autoimmune arthritis that are unresponsive to treatments currently available. The novel discoveries made by Dr Jonsson could lead to improved understanding of the processes that underpin arthritic associated inflammation and allow for the design of novel treatments much needed within clinical rheumatology.

Keeping Up the Momentum…

Abstracts from her results have been submitted to FOCiS, a meeting concentrating on translational immunology. Furthermore, Dr. Jonsson will be a participant in the FCE program for early career scientists at the FOCiS meeting. Her long-term goal is to set up her own independent laboratory, which will focus on the roles of CD8 T cells in rheumatoid arthritis, psoriatic arthritis, and other types of autoimmune disease. ANRF wishes Dr. Jonsson much success in these endeavors and is certain that she will have much to contribute in the ongoing fight against these diseases.