“Actually, I CAN” | Jessica Marches On Her Juvenile Arthritis 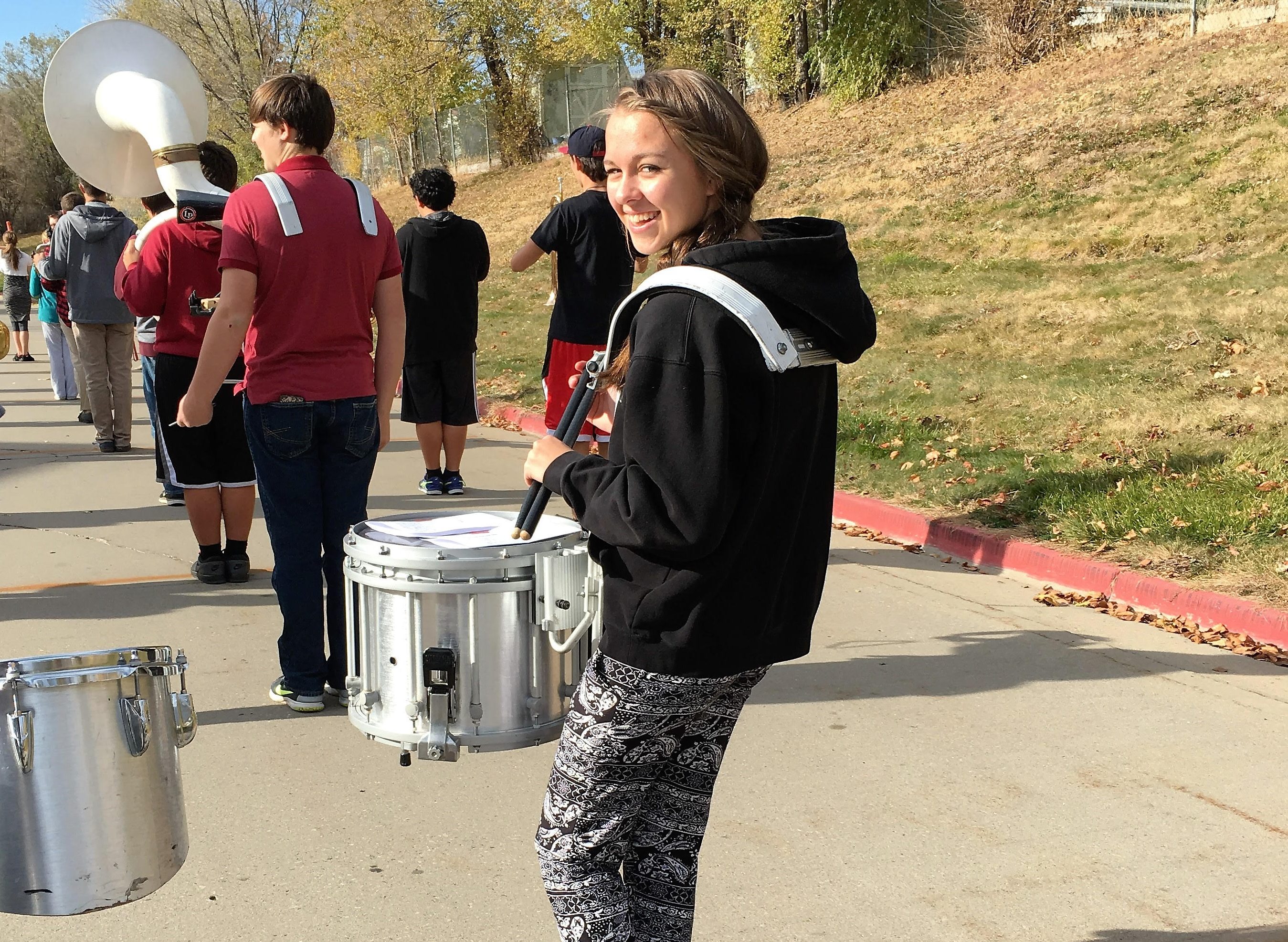 “Actually, I CAN” | Jessica Marches On Her Juvenile Arthritis

Jessica takes to the pavement with her high school marching band, drumsticks in hand, ready to perform. Upon first glance, you would never be able to tell she went from being wheelchair-bound due to juvenile idiopathic arthritis (JIA), to marching in two parades in only a matter of months.

Jessica, 16, is determined to defy the odds of juvenile idiopathic arthritis by participating in Drumline. She can be seen playing the snare drum, and when her arthritis is particularly difficult, she plays the vibraphone, as it’s easier on her joints. She initially gravitated towards the percussion section, as she could not play any wind instruments due to her arthritis having manifested in her jaw. From that point on, she was hooked. Although she continues to perform and do the things she loves, the road to get there was not always easy.

Her journey with JIA started when she was 8. Around that time, she started to notice swelling in her knee, coupled with intense pain when walking. After countless doctor’s appointments, she was officially diagnosed with juvenile idiopathic arthritis, shortly after Christmas 2010. Although she describes her pain to have been relatively mild for the first few years, her JIA took a turn, becoming very severe when she was around the age of 14. “I couldn’t even think I hurt so much.” she recalls.

After her first serious flare, Jessica experienced a period of wellness again, where she was able to get back to doing things she loved: marching, dancing, and just being a teenager. But, once again, her juvenile idiopathic arthritis struck back in full force in late 2015. She fought a hard battle, determined not to let her disease dictate her life. But by January, she was experiencing a new set of symptoms, including nerve sensitivity. She tried to push herself to stay active, but it only seemed to exacerbate the pain. “Everything that touched me felt like knives were stabbing me, throughout my whole body. It crushed me.” she says. Eventually, the pain became debilitating, forcing Jessica to become wheelchair-bound. Much to her dismay, she had to give up the very things that brought her joy. “It felt like my world was falling apart when I had to quit everything.”

Persistence and a Positive Mindset Despite Juvenile Idiopathic Arthritis

Jessica felt beat down and defeated. She accepted the pain, telling herself she needed to learn to be okay with it. However, when the entire marching band was going on a trip to Disneyland and Jessica was to be put in the hospital at the same time, she reached a breaking point. At a crossroads, Jessica made a life-changing decision by altering her mindset.

“I got tired of being sick, I got tired of not doing anything with my life. I hurt whether I was sitting around or attempting to do the things I love. So, I might as well hurt a little bit more and get something out of it, rather than being miserable doing nothing… I was only the one who was getting between me and the things I loved, not my arthritis.”

From that point forward, she developed a motto for herself: “Actually, I CAN.” In times when she doubted herself, Jessica would repeat this phrase to herself as a reminder of all her capabilities.

“I love the pause after “actually”, because it shows where you question whether you can or not, then decide that you can. I say this to myself at least a billion times a day because my first thought is always to doubt myself, but then I remember that I can do anything that I put my mind to as long as I believe I can.” she explains.

With the help of the wheelchair, medication, a positive mindset, and the support of her mom and friends, Jessica managed to make it on the band trip to Disneyland. The trip was a tipping point for Jessica: it opened her eyes to all the things she was still capable of doing. She found the strength to head to school, attend band practice, and took daily walks with her mom to help her rebuild her endurance. The more she walked, the more her confidence grew. She made herself goals, like running a 5k, walking a “pioneer trek”, and marching in a parade again.

Determined to prove everyone wrong, she accomplished everything she set out to do, and even marched in two parades instead of the singular one she had anticipated. Although she admits that it was not easy, she persevered.

Now, Jessica is back to doing the things she loves, with some modifications, of course. Due to the physically intensive nature of Drumline, Jessica must be cognizant of her aches and pains. During practice, instead of playing traditional grip (a technique for holding drumsticks, where both sticks are held differently in each hand), she opts to play match grip (sticks are held the exact same in both hands). This helps take the pressure off her elbows. She also plays the vibraphone, a percussion instrument, similar in sound and appearance to the xylophone. The vibraphone gives her the opportunity to take a break from marching with her heavy drum, as the xylophone is a stationary instrument. However, the band is working together to find a way to connect Jessica’s snare drum to her wheelchair, so even when her juvenile idiopathic arthritis prevents her from marching, she can still play the show music she works so hard to learn.

Although Jessica admits that her JIA has caused her a fair share of grief and pain, she credits it as a rewarding experience as well, opening her eyes to things she may have never experienced otherwise.

“I have been given countless opportunities to be strong, to inspire, to meet incredible people, to learn how to push myself, and not let anything come between me and my dreams.”

What do you dream of despite your arthritis? Share your dreams below!

Help find a cure for juvenile arthritis by making a donation today!