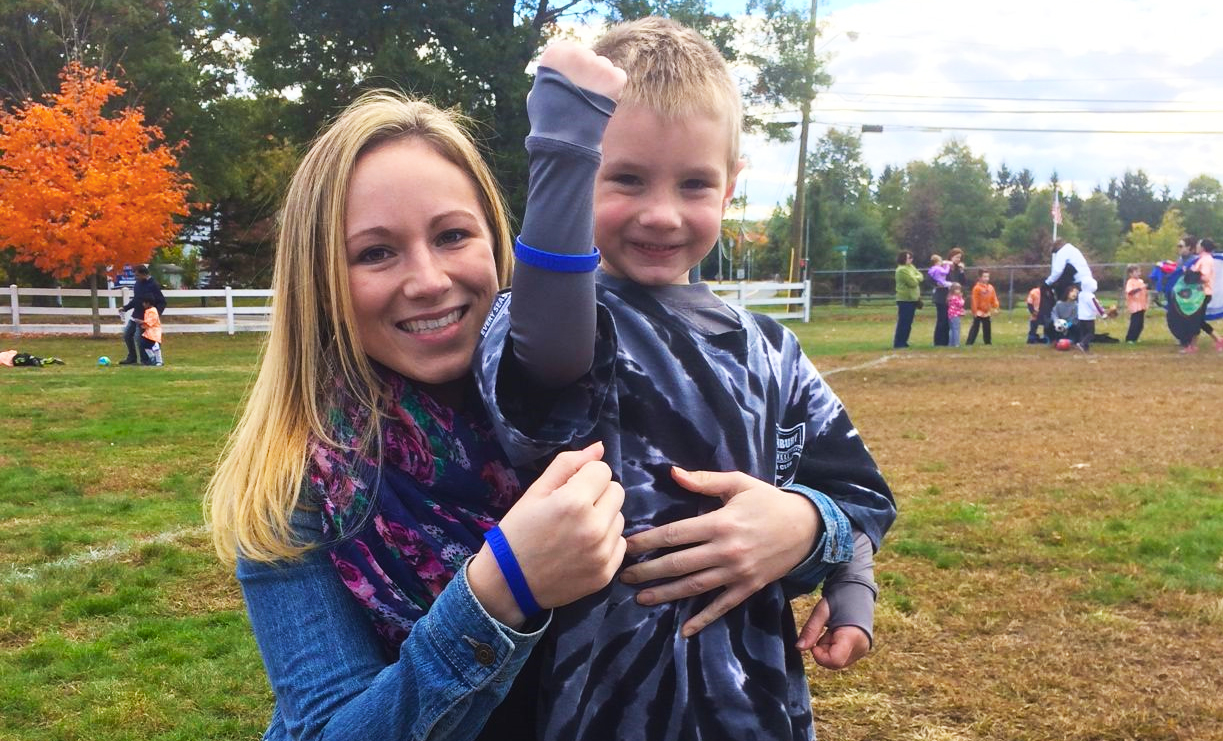 Nick (pictured above with his aunt Kathy) is a young man with juvenile arthritis who looks up to his superheroes. In fact, he often gleefully prances around his house pretending to be The Incredible Hulk, Iron Man or Link from the Legend of Zelda. However, according to his parents, Nick isn’t just pretending — he truly is a superhero in his own right, a juvenile arthritis superhero.

Nick as as Link from the Legend of Zelda

Nick had been limping around the soccer field while battling mysterious pain and swelling for three years without ever once complaining. When his parents finally learned the truth — that their son was suffering from juvenile idiopathic arthritis (JIA), often referred to at juvenile rheumatoid arthritis (JRA), they were devastated. Now, Nick and his family are spreading the word about JIA/JRA so other kids just like Nick can find relief from their pain and return to doing what they do best: being kids.

“Nick had been battling pain for so long that it became his normal,” said Nick’s mother, Jaime. “If my husband or I suddenly felt what Nick felt, I’m sure we would be doubled over in pain. Kids with JRA are true superheroes.”

Nick with his mother Jaime

Nick was only three years old when one of his knees swelled up like a balloon. The emergency room doctors performed a battery of blood tests and X-rays, but could not find anything amiss so Nick was sent home without any plan of action. Unfortunately, Nick’s condition worsened over time — he grew increasingly fatigued and the pain spread like wildfire throughout his body.

Doctors trivialized his pain, attributing it to the fact that kids sometimes make up stories for attention. It was only when Nick’s ankle became so swollen that his foot actually began twisting inward that his mother knew that something serious was happening and she took action. At age six, Nick was finally diagnosed with Juvenile Idiopathic Oligoarticular Arthritis.

Nick is a juvenile arthritis superhero who promises to keep on fighting!

“I fought back tears when I heard the diagnosis — I felt terribly that Nick had been soldiering through this for three years and no one knew how to help him,” revealed Jaime. “Our struggle to find answers has made our family impassioned about spreading the word about juvenile arthritis. We hope that by sharing Nick’s story we will help other suffering children to be diagnosed sooner rather than later.”

Nick was a superstar soccer player starting at four years old, but once his symptoms worsened, he struggled to keep up with the other kids. Due to his arthritis Nick would often run with a limp and need extra rest. However, after his rheumatologist diagnosed him and started his treatment, Nick began a steady ascent back to a more “normal” childhood. While Jaime admits that Nick’s health still isn’t perfect, overall, Nick is slowly returning to his superhero self, scoring goals on the soccer field alongside his teammates and running around as his favorite superheroes.

Nick as Ironman and The Hulk

Jaime learned about the Arthritis National Research Foundation when her sister-in-law, Kathy, ordered a bunch of Cure Arthritis awareness bracelets to support Nick and Jaime. Now, the three of them, along with Nick’s entire family, are joining forces to raise awareness that kids, can in fact, suffer from arthritis. Jaime hopes that the researchers supported by the foundation will soon determine what causes juvenile arthritis, and how new treatments can be help these young kids.

“We are proud to wear our Cure Arthritis bracelets to support Nick and to raise awareness about arthritis,” said Jaime. “We hope that sharing Nick’s story can help other children receive a diagnosis so they can start treatment and find relief.”

Order your own “Cure Arthritis” awareness bracelets here!
or Click Here To Make a Donation To Support Kids Like Nick

Today, Nick can run, jump and kick the soccer ball around. He inspires his family and everyone who meets him with his zest for life. While Nick will always welcome the chance to pretend to be Superman, when all is said and done, this juvenile arthritis superhero is content with just being a kid.

“Nick inspires me when he tells me, ‘Mommy, even though my body is confused and it’s hurting itself, we’re going to fight it and I’m going to get better,’” said Jaime. “Nick runs faster and faster every single week out on the soccer field. I am so hopeful about the future.”

Do you know a juvenile arthritis superhero that is heroically battling arthritis?
Tell us in the comments below!