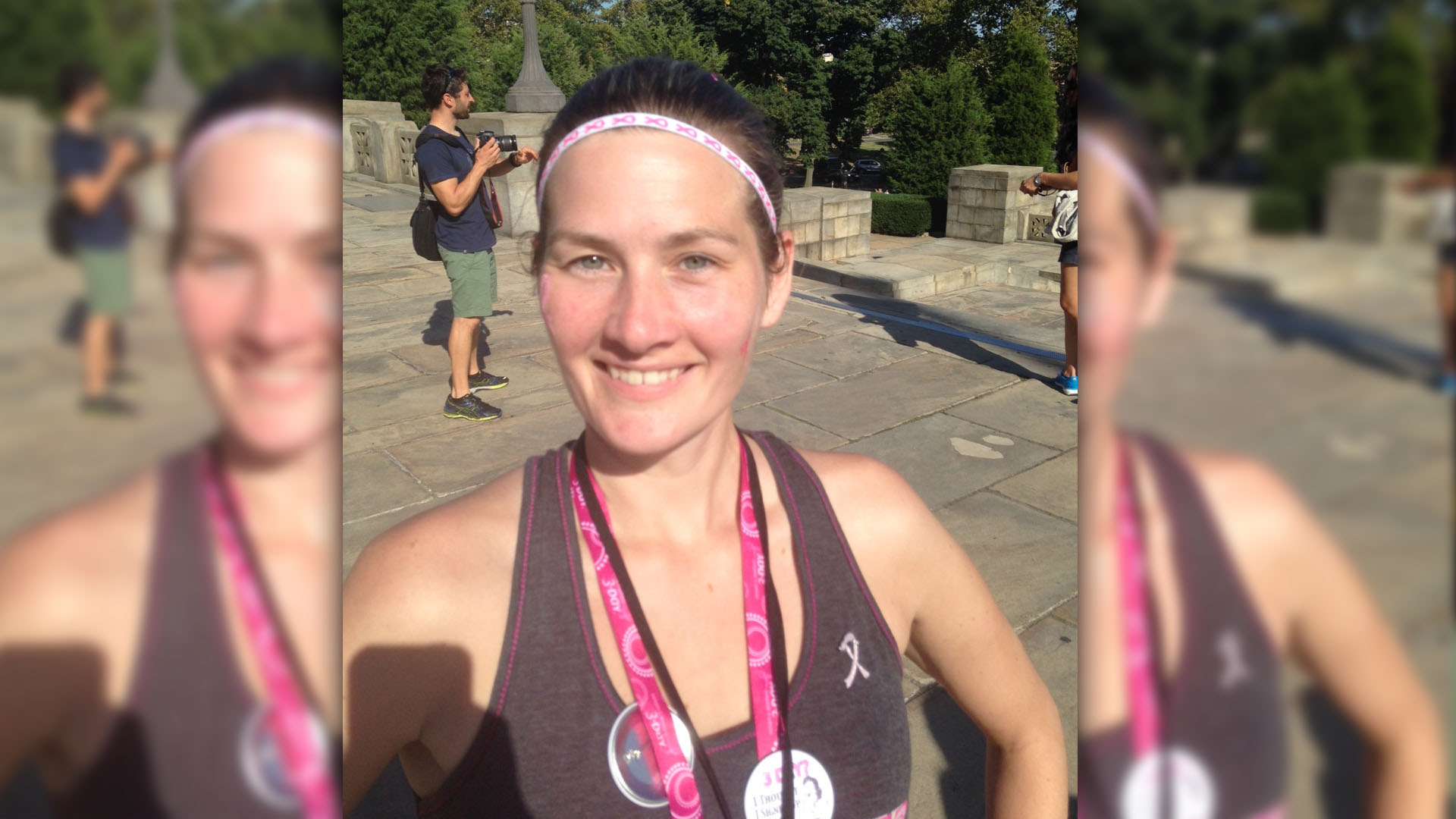 Posted at 14:58h in Rheumatoid Arthritis by ANRF 2 Comments
Share

Kate Horneff lost a lot during her ten year battle with rheumatoid arthritis (RA) – family, friends, relationships, her fun-loving and adventurous spirit – but perhaps the most devastating was her loss of hope. However, when an unexpected turn of events transpired and restored Kate’s hope and faith in life, she promised herself that she’d never let that great feeling escape her again.

The New Jersey arthritis fighter explained that the confidence she eventually found inspired her to live her life to the fullest despite her RA. As a result, last year, Kate took on the most daunting challenge of her life in an attempt to walk sixty miles to support the Susan G. Komen Foundation. Unfortunately, at mile 47, so close that she could taste triumph, her body gave out and she was unable to finish the event that she had trained months for.

Currently, fueled with more hope and fire than ever before, Kate plans to cross the finish line of her 60-mile walk this fall and once again prove that she is stronger than RA.

Kate, now 35, was 25 when she first developed symptoms of rheumatoid arthritis. Unfortunately for her, it took nearly two years to receive a diagnosis. Even gloomier than her diagnosis was a sobering prognosis from her rheumatologist – Kate was cautioned that 80% of patients with moderate to severe RA stop working within 10 years of being diagnosed.

For the next seven years, Kate spent nearly all of her time either at work or on the couch. Her pain kept her awake most nights, and as time went on, Kate became increasingly fatigued, burnt out, and isolated. Her seclusion from the world damaged many of her relationships and she figured that it was only a matter of time before she had to leave work on disability like her doctor had predicted.

Years passed, and over time Kate had grown accustomed to her life of seclusion, fatigue, and pain. When she changed doctors in 2012 and began a new medication, she didn’t expect much, but to her surprise, over time the medication stabilized her condition, aside from the occasional flare. Another surprise came when she changed massage therapists. She was shocked that her joints felt relieved in a way she had never felt before, so much so that she forgot to take her arthritis medications. It was then that Kate gained her hopefulness back.

“All of a sudden, I was full of hope. Hope is something I hadn’t felt for over 7 years and yet, out of nowhere, I was instantly filled with it,” said Kate.

As Kate’s momentum began rolling, she continued her streak of success by making plans with friends and even ventured back into dating, something she thought would never happen again. She felt more alive than she had in many years and slowly became physically active. Little by little, Kate rediscovered the adventurous side of herself that had disappeared along with her arthritis diagnosis. She went rock climbing, did yoga, went backpacking, and even competed in a 5K. She realized that with a little effort, there were so many things she could do to support her new active lifestyle, and though the changes were small, the rewards paid off big time.

“Small changes made a huge difference for me,” Kate explained. “For example, I had a friend change all of the door knobs in my home to levers – I was no longer stressed about opening doors when I couldn’t use my hands.”

In 2014, she took on a challenge that had personal meaning to her: The Susan G. Komen Foundation’s 3-day, 60-mile walk, to honor her mother’s best friend that passed away when Kate was twenty. Kate wanted to be extra prepared both physically and mentally so she began extensive training. Embarking on walks that lasted over three hours and thinking about how to plan for surprise flares and overwhelming fatigue as she tested the limits of her body.

“I always carried medication and joint braces with me just in case,” Kate said. “On the long walks I almost always parked a ‘safety car’ at the half way point so that I was never too far from transportation if I needed it. But with every training walk I made a new friend, felt physically and emotionally stronger, and learned something new about myself.”

Despite not finishing the sixty mile walk, Kate never lost her determination to complete it. With a new training regimen in place for October’s walk, Kate is more determined than ever to finish, despite her RA. She will walk in honor of those who have courageously fought battles against cancer, as well as to continue fighting her own courageous battle against rheumatoid arthritis. Her preparation goes beyond training, diet, and hydration – it is also fueled by hope.

“The walk was an incredible journey for me, from the amazing people that I met to the things I’ve learned about myself. All of us that walked had the same goals: to honor the fallen, support the survivors, and empower those still fighting. Whether it’s cancer, RA, or something else, everyone has something in their life that takes a toll on their spirit and their hope – but it is essential to never let yourself lose it.”

Has being hopeful fueled your own battle against arthritis? Tell us how you stay positive in the comments below!