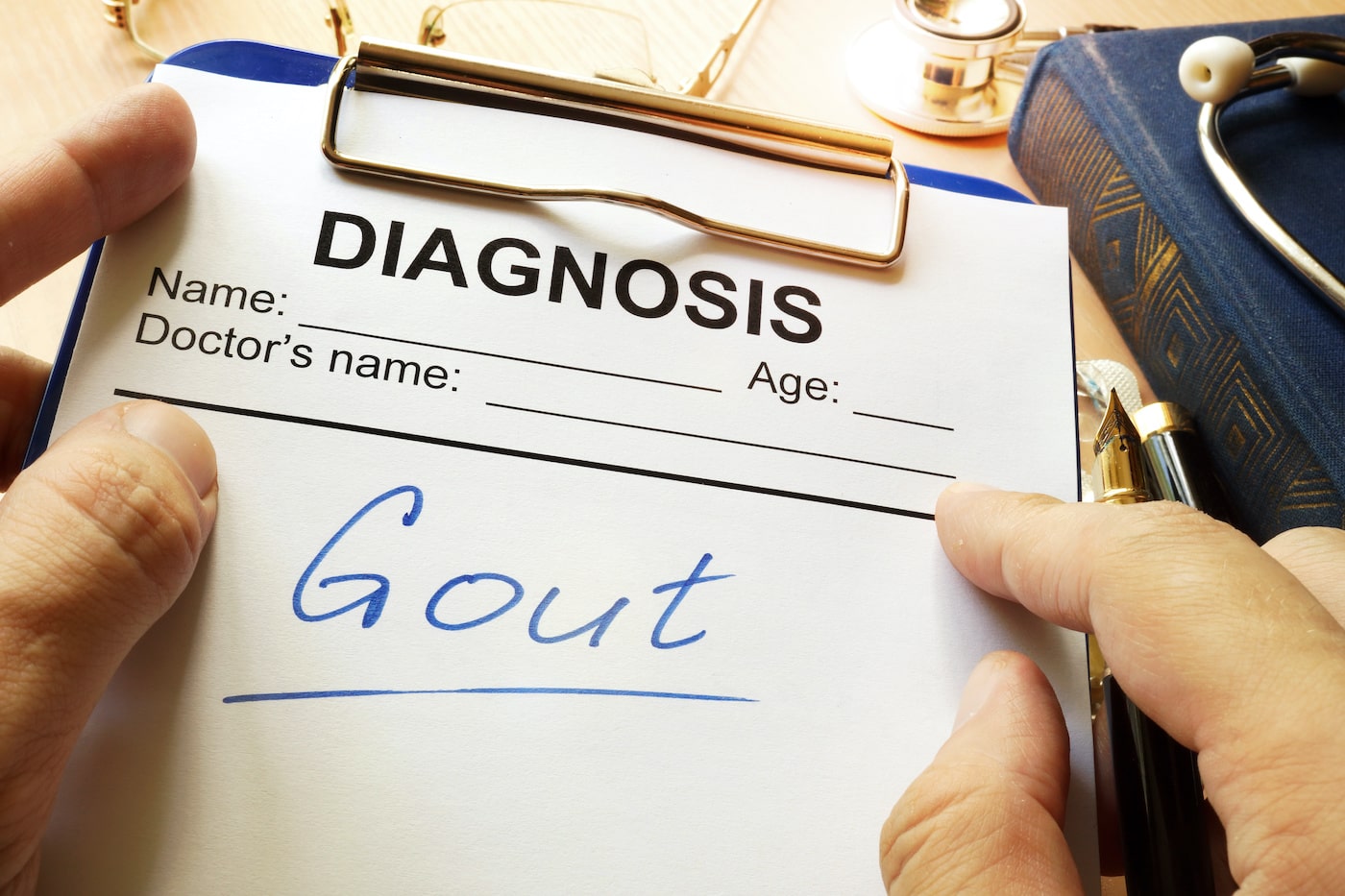 “The patient goes to bed and sleeps quietly until about two in the morning when he is awakened by a pain which usually seizes the great toe, but sometimes the heel, the calf of the leg or the ankle. The pain resembles that of a dislocated bone … and this is immediately succeeded by a chillness, shivering and a slight fever … the pain …, which is mild in the beginning …, grows gradually more violent every hour … so exquisitely painful as not to endure the weight of the clothes nor the shaking of the room from a person walking briskly therein.” This description of gout by Thomas Sydenham, a famous English physician, still holds true for many sufferers of the condition. The prevalence and treatment of gout has evolved with our society and medical advancement. In this article, we look back at the history of gout and detail how it is managed and treated today.

Arthritis of the Rich

In 2640 BC, the Egyptians identified a condition they called podagra, now known to be acute gout in the metatarsophalangeal joint (the big toe). Hippocrates, in the 5th century distinguished gout from other forms of arthritis, calling it both an “arthritis of the rich” and “the unwalkable disease”. He recognized that an association existed between gout and a more decadent lifestyle accompanied by the intake of rich foods and alcohol. For centuries the idea that gout was a disease for the affluent and wealthy was widely held, as seen in The London Times’ in 1900 which said, “the common cold is well named—but the gout seems instantly to raise the patient’s social status.”

While gout may have historically impacted mostly individuals with wealth and status, the disease has sometimes had far reaching political and social consequences. Holy Roman Emperor Charles V (who was also King Charles I of Spain) developed gout in 1528 largely owing to his tendency towards excess in food and drink. Over the next two decades, the gout progressed, leading to increasingly severe joint inflammation. Crippled by severe inflammation, the king could not lead his forces into battle, postponed crucial military action, and was eventually forced to relinquish control of his forces and abdicate his throne. In 1773, British statesman William Pitt the Elder was absent from Parliament owing to a gout attack. During his absence the members of Parliament were persuaded to levy a substantial tax on tea imports to the American colonies, a tax to which he was staunchly opposed. This led to the well-known “Boston Tea Party” with British troops being sent to keep the colonists at bay. The armed response to these occupying forces sparked the start of the American Revolution and laid the foundation for the creation of the United States of America.

The 17th century saw many substantial advances in the understanding of arthritis.  In 1679 Antoine van Leeuwenhoek, a microscopy pioneer, reported the presence of crystal structures in the surface of joints and cartilage, most frequently associated with gout. Sir Alfred Garrod, known for defining RA as a separate condition also provided a number of insights into the development of gout. At a public lecture in 1848, Garrod reported on the presence of increased uric acid in the blood of patients suffering from gout, stating it was the cause, rather than a symptom, of the condition. Notably through his studying of gout Garrod developed the first modern clinical chemistry test. This “thread test” measured uric acid in serum or urine. 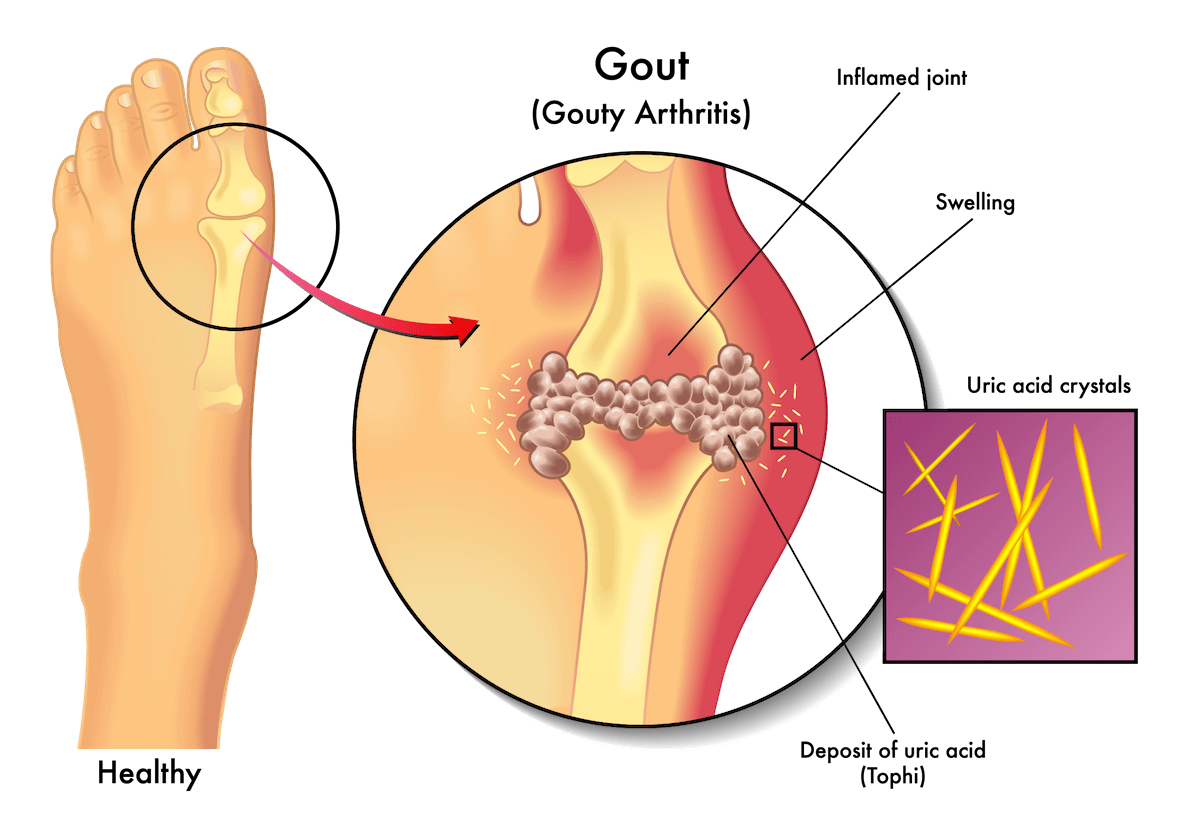 The association of gout with wealth began to faulter as industrialized society brought the opportunity for excessive habits to classes beyond the aristocracy. Increased consumption of meat in Europe and North America were associated with increase occurrences in the development of gout. Thus, evolving culture has been key in the spread of this common disease. The modern age has also dispelled the former notion that gout was a disease of men. Currently and in recent history a greater prevalence of women with gout has been noted. This increase is more substantial in women that have undergone menopause. But, while changing lifestyles of the masses have made gout a more common ailment, there is still evidence that some family lines may be more privy to the condition than others. In the 18th century, the possibility of a genetic component was first recognized. A Scottish physician, William Cullen, noted that gout attacks were more common in men with certain physical features and whose fathers had also suffered from gout. Later, in 1967, a specific purine enzyme deficiency was identified which was associated with a rare form of inherited gout.

Treatment for gout has nearly as long a history as the disease itself. Evidence exists that in ancient Greece that colchicine, a nitrogenous compound derived from the autumn crocus plant, was used as a strong laxative as a measure to combat a lifestyle of excess. However, its first use as a selective and specific treatment for gout is accredited to the Byzantine Christian physician Alexander of Tralles in the 6th century AD. Toward the end of the 19th century uricosuric agents (substances that increase the excretion of uric acid in urine) were used for the first time. Nonsteroidal anti-inflammatories (NSAIDs) are most commonly the drugs of choice for treating acute gout in modern medicine. A key advance in the treatment of increased uric acid levels, was the development of xanthine oxidase inhibitors. Xanthine oxidase inhibitors inhibit an enzyme involved in the synthesis or breakdown of purines. These inhibitors have shown to be effective in reducing uric acid levels and in reversing the progression of urate crystal deposits. Allopurino, a xanthine oxidase inhibitor, has become the most frequently used uric acid lowering drug in clinical practice. While medical advances have meant more effective treatments for gout and understanding of the causes of the condition has grown tremendously, simple dietary choices remain an important part of symptom management for gout sufferers. Modern science has confirmed that purine rich foods can contribute to the development and worsening of gout symptoms. Red meats, fish, alcohol, and processed sugars are all thought to be contributors to attacks of gout and should be avoided by those who have been diagnosed with the disease. For those with gout, to feast like a king is to suffer like one.