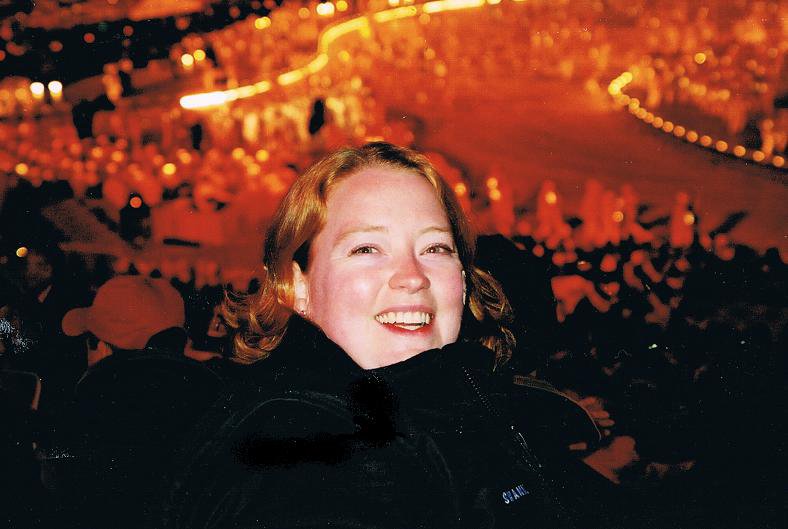 Kendra Street is skilled at staying on track — namely, the long track in speed skating on the ice rink. Kendra, a Canadian native, had dreams of competing at the Olympics in long track speed skating throughout her collegiate career before an arthritis diagnosis threatened to take away a sport so central to her life. However, instead of quitting, Kendra shifted her focused and began coaching short track speed skating. Her determination to stay in a sport she loved has resulted in more success than she could have ever predicted for herself when she was an athlete. The highlight of her career has even included a trip to the Salt Lake City Winter Olympics in 2002 – not as a dedicated athlete, but instead, as a devoted speed skating coach.

In spite of her arthritis, Kendra coaches a number of athletes of all ages in multiple sports every single day. By day, she is an instructor for preschool gymnastics and trampoline and by night, speed skating. By refocusing, Kendra has created opportunities to reach her own goals and guided her promising athletes to do the same.

“When I had to stop speed skating, I was in a very bad state, both psychologically and physically,” shared Kendra. “My whole life revolved around skating and I was absolutely shattered. Turning to coaching is what made me feel whole again.”

At 41, Kendra has been battling rheumatoid arthritis (RA), osteoarthritis (OA) and several related autoimmune conditions for over 20 years. Her RA is considered “medically stable” and her OA has led to the need for a total knee replacement. She is currently waiting for a second knee replacement surgery to take place. Though her body is mostly stable thank to the help of a biologic infusion, it took her an excruciatingly long time to feel mentally at peace with her diagnosis.

“It was a very challenging time when the crushing realization hit that I could no longer compete as a competitive athlete,” revealed Kendra. “I felt like RA ruined my life, but upon looking back, I realized it simply changed the course of my life.”

Up until the day she was diagnosed in university, Kendra had been an up-and-coming skater. It took about six months of one misdiagnosis after another, until one day she lay sprawled out on her dormitory bed, unable to move, in agony and with tears flowing. She was serious pain and she needed to get to the bottom of it.

Kendra persisted with her doctors and finally received a diagnosis, rheumatoid arthritis. The diagnosis hit her hard and she took some time to grieve her lost career in speed skating before being able to shift gears in a new direction. While at the university she began her career as a speed skating coach, guiding her athletes at the Olympic Oval in Calgary. After graduation, she moved to New Zealand and had the opportunity to coach the New Zealand National Speed Skating Team at the 2002 Winter Olympics in Salt Lake City.

“Without RA, I might have been a good athlete, but most likely not Olympic level,” explained Kendra. “Because of the RA, I started coaching at a young age and ended up coaching at the Olympics for New Zealand by age 27. My goal had always been to go to the Olympics. I simply achieved that goal in a different manner, as a coach rather than as an athlete.”

Kendra explained that her arthritis has changed her attitude by making her a more positive person. She attributes much of that newfound wisdom and perspective to taking charge of her treatment plan with her doctor.

“I have RA, but RA doesn’t have me,” she said. “Listen to your doctors, but do your own research and know your own body. Rheumatoid arthritis patients can take back control by being proactive.”

Guiding a New Generation of Athletes, Speed Skating and More

Through it all, Kendra often finds herself fatigued and unable to even lace up her skates due to bony spurs in her feet and reduced energy. But in spite of the pain and difficulty, her emerging skaters, including her son, keep her motivated keep on going.

“It feels good when I get back on the ice,” said Kendra. “I love seeing the glow in the skaters’ eyes when they achieve something new.”

Kendra resonates with the Arthritis National Research Foundation’s mission to find a cure through research. She hopes that future research teams will emphasize arthritis prevention along with development of improved treatments for those already diagnosed. She believes that the key to a “cure” is to stop the disease in its tracks before onset ever occurs.

“I would love to see the triggers for RA be discovered and be able to identify who is most at risk,” said Kendra. “While it’s good to have treatments to stop the progression of the disease, I believe it’s even more important to stop RA before it ever takes hold!”

Click to support the ongoing research at the Arthritis National Research Foundation!

Her days of competitive speed skating may be in her past, but today Kendra continues her passion as a coach and she hopes to inspire others to continue to follow their goals, even if they might have to change how they’ll get there.

“Coaching my practices have left me completely exhausted and I’m going to have to figure out this work/life balance in order to be able to continue. I know I will figure it out to keep doing what I love. As the Kiwis say, ‘She’ll be right. No worries mate!’”

Is there an activity that you’re passionate about? Tell us a little about your journey in the comments below.