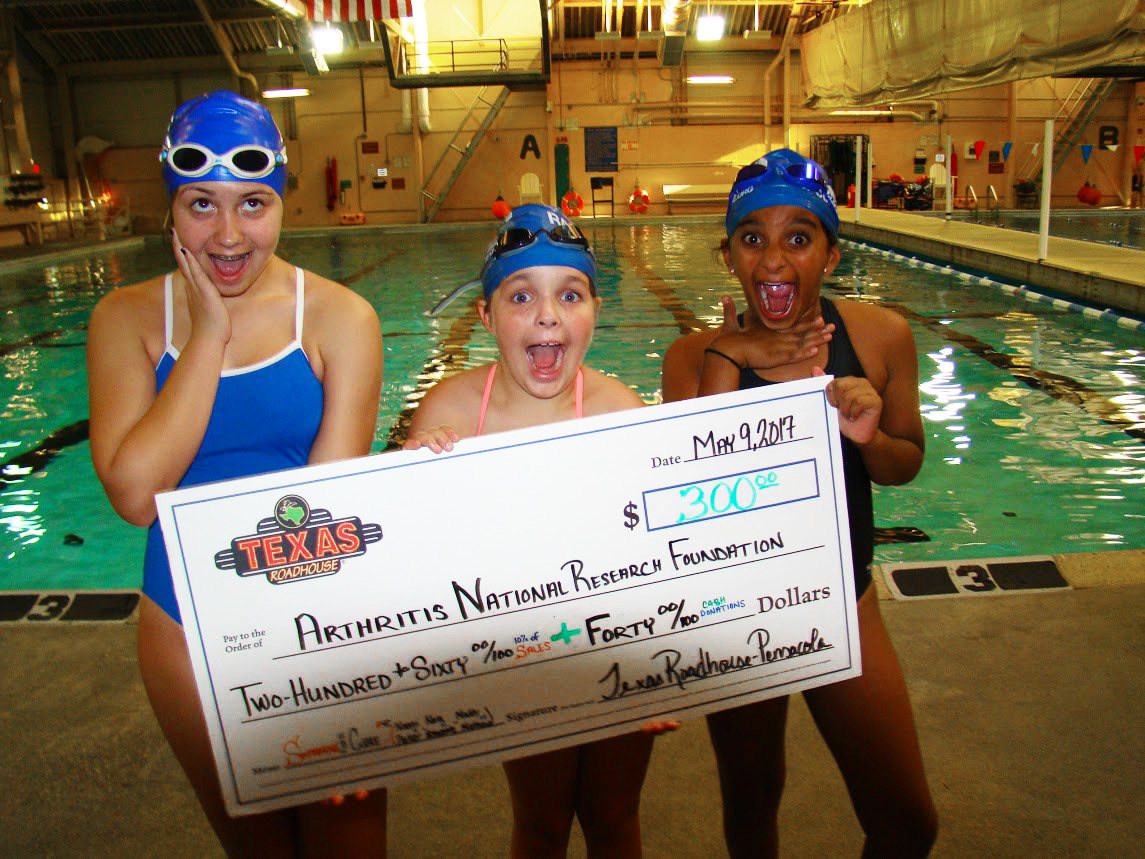 The ladies of team “Swimming For A Cure” made it easy to give back at their most recent arthritis research fundraiser: all you had to do was eat!

Naomi and Kara, the young dynamic duo from Racing For A Cure, helped organize an arthritis research fundraiser at Texas Roadhouse in Pensacola, Florida on May 9th.

The goal was to spread awareness about arthritis and raise funds for the Arthritis National Research Foundation. The restaurant pledged to donate 10% of all receipt totals dropped in the designated bucket between 4pm – 8pm. The Texas Roadhouse team estimated the girls could expect to raise $50. Could they do it? Never willing to back down from a challenge, the pair were determined to smash that goal.

Preparing for the Big Night

Melissa Parker, Naomi’s mom, came across the idea by chance. Texas Roadhouse frequently held local school fundraisers, but would they be willing to help spread arthritis awareness, too?

Melissa took a chance and contacted the restaurant with her idea for an arthritis research fundraiser. Without hesitation, they accepted her proposition, and just like that, “Eating For A Cure” was in full-swing.

“People do not necessarily have to do anything outside the norm.” explains Melissa. “Just go to dinner, eat some great food, and feel a sense of giving back.”

The girls prepared for the event weeks in advance. To get the word out, they were offered the opportunity to paint the “Graffiti Bridge”, a community art project in Pensacola. They painted the entire bridge blue for Arthritis Awareness Month, honoring the Arthritis National Research Foundation and promoting their fundraiser. Naomi also personally decorated the receipt-drop bucket, which she credits as one of her favorite parts of the whole fundraiser.

The night of the fundraiser, the girls were decked out in their Racing For A Cure shirts, ready to give some visibility to arthritis. The entire Texas Roadhouse staff was on board too, wearing their blue bracelets. Kara, Naomi, and fellow teammate Maddy were in charge of greeting visitors when they came in. The girls were happy to explain their cause to any curious customers and the staff were equally as excited to get the word out.

“[The managers] actually went around to every table and told them why we were there.” said Melissa. “It helped [that] they were super peppy and excited! I love how excited they got and that our girls got to be hands on to raise money.”

As the night went on, customer involvement increased as the number of receipts in the drop-bucket grew. With the help of Melissa and the enthusiastic restaurant staff, the group had a successful night and brought in $300 in only four hours!

“The girls displayed passion and worked extremely hard the night of the event and leading up to it. It was an extremely rewarding event and we look forward to partnering again in the future!” said Sue Barton, the Marketing Manager of Texas Roadhouse. Afterwards, Texas Roadhouse presented the check to the girls in honor their impressive achievement.

For Naomi and Melissa, the cause hits close to home. Diagnosed with Systemic Juvenile Idiopathic Arthritis (SJIA) at the age of 1, Naomi spent several weeks in the hospital while doctors tried to find a correct diagnosis.

“It was awful.” Melissa recalls. “Her hands, feet, arms, and face were so swollen, and [she had] pink eye in both eyes. They could not draw blood from any of her veins because of the swelling.” Naomi had to relearn how to walk and even roll over. Weekly shots helped to manage the pain. As she grew, Naomi struggled to compete in running sports with the rest of her peers.

In hopes of finding a fun sport for Naomi to play, Melissa enrolled Naomi in swim when she was 7. “I watched this child who struggled with running sports be able to compete, fully.  It was, and still is, emotional for me at times.” she says. It has been two years since Naomi began swimming and she is currently in remission from her SJIA.

From Naomi’s new love of swim, Team “Swimming For A Cure” was born and Naomi took on the role as Team Captain. The team has raised almost $700 for arthritis research since their start, inspiring others to grab their swim caps and jump in the water to spread awareness.

Continue to support their efforts by making a donation
to the Swimming For A Cure team page today!