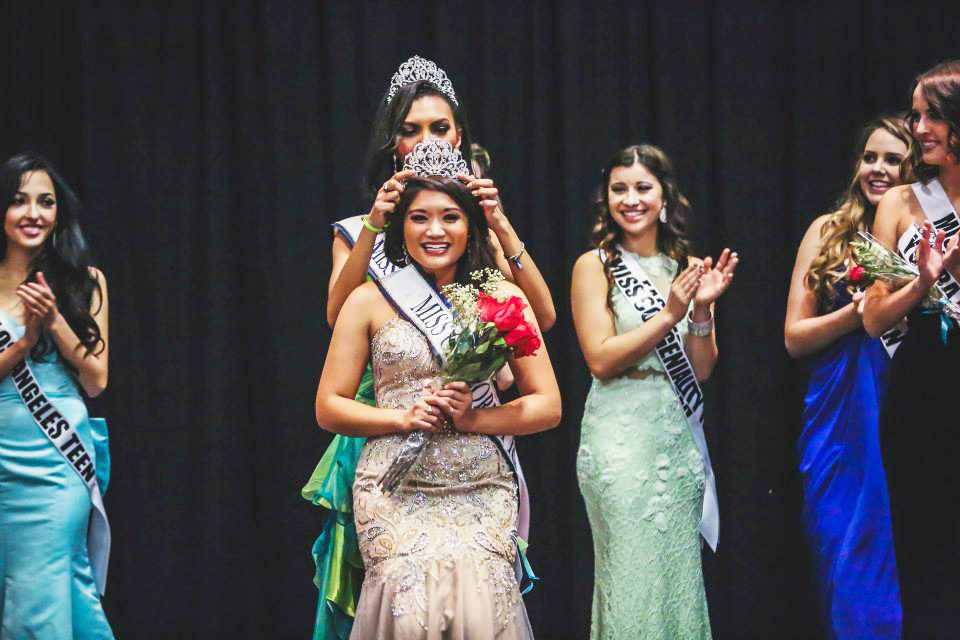 As Rochelle Lozano confidently marched down the runway of the Miss California Icon Pageant this past spring, the only mission on her mind was to win so she could spread awareness about the disease that she quietly battles with; juvenile rheumatoid arthritis (JRA). Standing before the panel of judges, she blew away the competition with her brains, charisma, and stunning beauty. Her efforts and passion for juvenile arthritis awareness were rewarded as she was crowned with the title of Miss California Icon.

Rochelle embraced her moment of glory, but as the pageant drew to a close, she redirected the spotlight onto her message of staying positive and persevering in the face of JRA, which is a mantra she adheres to personally. With July being Juvenile Arthritis Awareness Month, Rochelle is now using her newfound fame to spread awareness about the same disease that she overcame on the path to winning her well-deserved crown.

“I began competing in pageants last year to passionately promote JRA awareness and my motto that perseverance, confidence, and inner beauty will allow you to achieve anything you aspire to in life,” explained Rochelle.

When Rochelle was diagnosed with JRA at age fourteen, the disease immediately took a heavy toll on her. Because of her compromised immune system, it took her twice as long to recover from illnesses and she suffered from significant weakness and fatigue. However, Rochelle made it a point to take impeccable care of herself so she would never missed a beat in her daily activities and sports. Fueled by her zest for life and healthy habits, she swore to take her passion of JRA awareness on the pageant circuit.

“To those living with arthritis, positivity is the key to coping,” advised Rochelle. “Surround yourself with loved ones that will help you monitor your condition. You will have great achievements in your life and inspire others along the way.”

The statewide Miss California Icon Pageant is designed to give the winner a platform to promote their particular cause of interest. For Rochelle, choosing the cause was easy. Despite her continued success in overcoming arthritis, she is acutely aware of the grimness of the disease. At her routine doctor appointments, she has met many other young children that are severely affected by the arthritis running rampant throughout their bodies. She believes that despite the ruthlessness of the disease, it is still possible for patients to achieve any goal they set out to accomplish.

Support the research studies at ANRF in honor of Juvenile Arthritis Awareness Month!

“My arthritis has turned me into a strong, spirited and resilient young woman,” said Rochelle. “Despite my diagnosis, I believe that I can achieve anything in life through perseverance. I want to be a positive voice and source of hope for others that may be struggling.”

Rochelle fully embodies the spirit of the pageant’s motto: “Be Bold. Be Great. Be You. Believe!” as she refused to rest after the competition ended. To Rochelle, the pageant victory was only a stepping stone to her ultimate goal of spreading awareness and encouragement about juvenile rheumatoid arthritis. In doing so, Rochelle has proven herself to be a model citizen and has epitomized the numerous lessons she has learned throughout her pageant experience.

“When I was crowned ‘2015 Miss California Icon,’ my dream came true of finding a platform that would allow me to raise awareness for a cause that is so near and dear to my heart,” said Rochelle.

While Rochelle loves getting dolled up with the glitz and glamour that each pageant brings, what she cherishes even more is having a platform to deliver an important message to her fans – that with enough perseverance, juvenile rheumatoid arthritis is no match for anyone pursuing their dreams. Rochelle’s pageant winnings were merely the icing on the cake, as the knowledge that she is helping others is her most treasured prize.

What is YOUR passion and how are you using it to spread arthritis awareness? Share it with us in the comments below!