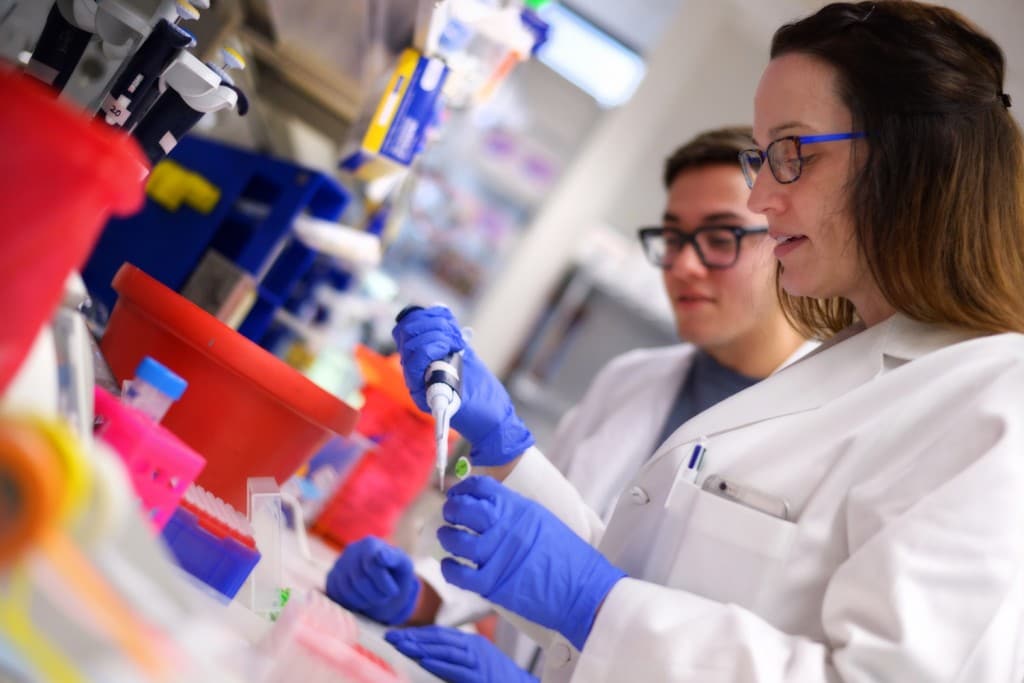 Early in her career, pediatric rheumatologist, Tiphanie Vogel, MD, PhD, cared for a seven-year-old boy with a rare form of juvenile arthritis (JA). She discovered that her young patient had a specific genetic mutation that damages multiple organs and severely affects the joints.

Dr. Vogel, an Assistant Professor of Pediatrics at Baylor College of Medicine, played an instrumental role in a multinational collaboration that identified the brand-new disease caused by a mutation in a protein called STAT3. While nearly 300,000 children in the United States suffer from some form of arthritis, this particular mutation drives a devastating overreaction by the child’s immune system. 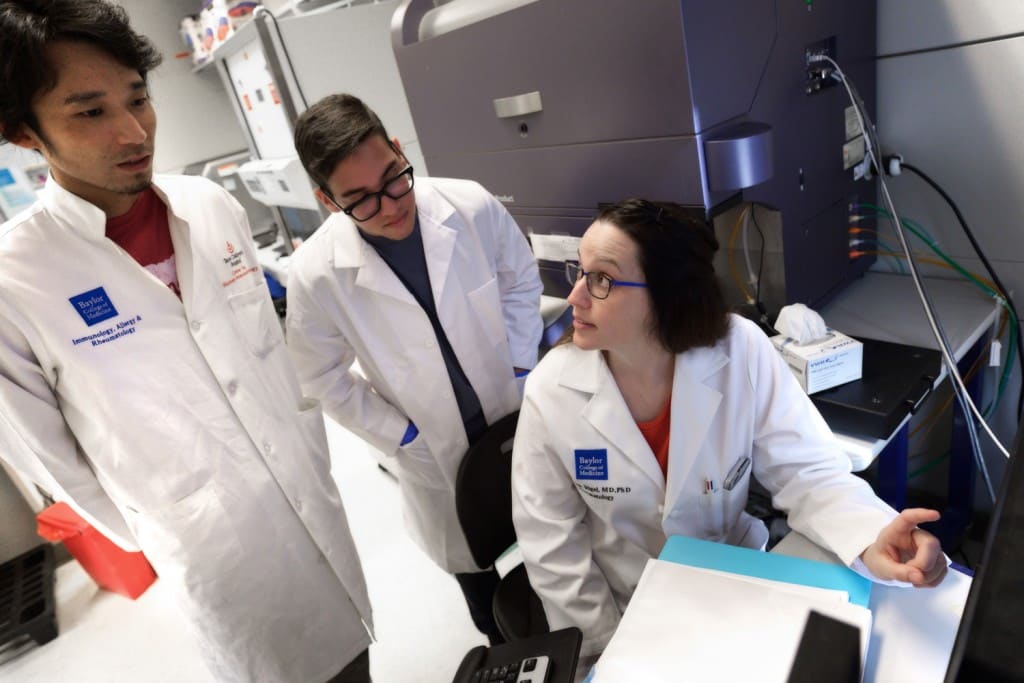 Increased activity of STAT3 causes the immune system to become overactive, leading to inflammation, severe autoimmune disease and a syndrome called STAT3 gain-of-function (GOF). The harmful mutation affects a number of vital signaling and regulatory pathways throughout the body. So far, only about 70 children worldwide have been diagnosed with the vicious autoimmune syndrome.

With funding from the Arthritis National Research Foundation (ANRF), Dr. Vogel is trying to pinpoint the region of the protein that spurs the overactivity in STAT3. As a pediatric rheumatologist, she sees patients at Texas Children’s Hospital in Houston, one of the largest pediatric rheumatology programs in the country. Her JA patients — ranging in age from birth to adolescence — offer her an opportunity to explore the mechanisms of the human immunology behind autoimmune diseases.

Could a better understanding of the role of STAT3 bring new drug targets for children with juvenile arthritis?

“I believe that changes in a particular region of STAT3 are more likely to predispose children to JA as a complication,” she explains. “Targeting that area may decrease the overactivity of the STAT3 molecule, which would presumably decrease the risk of autoimmunity.”

While Dr. Vogel is trying to understand the role of the STAT3 protein in juvenile arthritis, other investigators around the world are investigating how the syndrome prompts the immune system to attack the lungs, liver and intestines.

“My research involves looking at the structure of the STAT3 molecule and the area of the 3D structure where these mutations are found,” she says. “We know that STAT3 GOF leads to a range of autoimmune diseases.”

As for her original patient, the boy in St. Louis responded well to an arthritis medication called Actemra (tocilizumab) that reduces inflammation by blocking the IL-6 signaling hormone, one of many STAT3 activators. “STAT3 is a very diverse molecule that performs many important functions in the body,” Dr. Vogel explains. “My patient had been taking corticosteroids for nearly his whole life. By switching him to a newer injectable “biologic” medication that blocks IL-6, we successfully treated his arthritis.”

As a pediatric rheumatologist, Dr. Vogel says that the ultimate goal of drug discovery would be to design a new compound that blocks the specific region of the STAT3 molecule to help these kids.

“The average age of onset of STAT3 GOF syndrome is four and half,” says Dr. Vogel, who watches anxious parents struggling with their child’s multiple medical challenges. “My thinking is that if we can show the role of STAT3 in JA it could lead to new therapeutic targets.”

Since small molecule inhibitors often can be given in the form of pills, she hopes her research might one day lead to new oral drugs. The stress of giving a baby or toddler repeated injections in the belly takes a toll on the family. “It’s hard to give a shot to a child even once a week,” she adds. “Certainly, children would appreciate oral medications.” 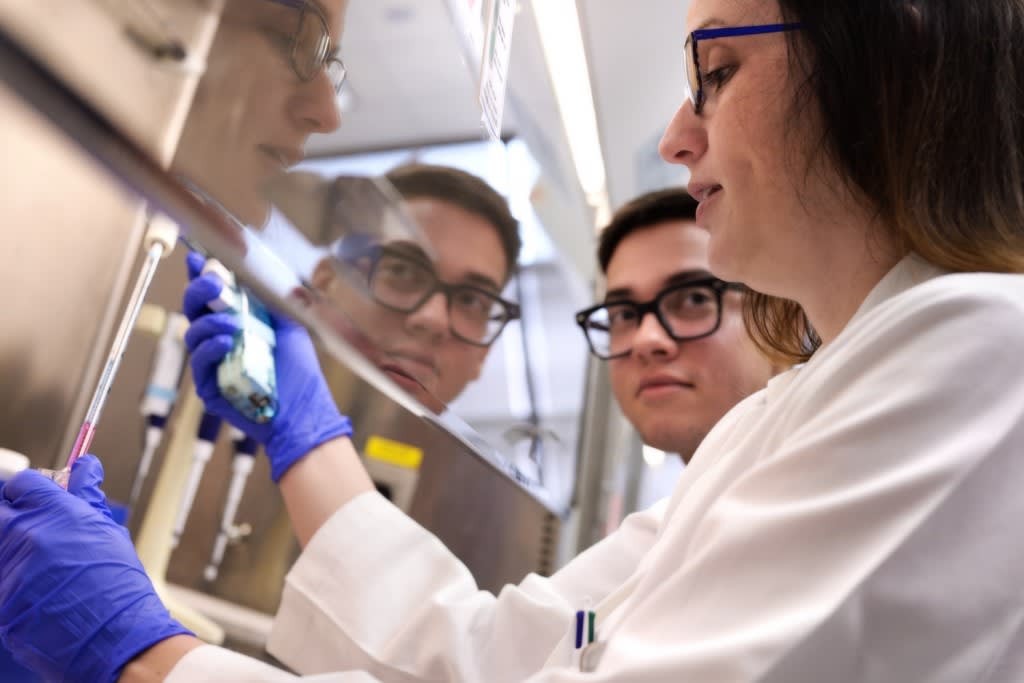 Her approach is two-fold: How to target the cellular region where the STAT3 GOF mutation arises, and how to mimic the change in a mouse model. Since mice have an almost identical STAT3 protein, her research team takes the mutation from a patient and creates a “transgenic” mouse with the same mutation.

“We can examine the mutation at a level that’s not possible in people,” she explains. “Using a microscope, we can see exactly what overactive STAT3 does to the joint. We are still trying to prove the role of STAT3 GOF mutations in JA. At this preclinical stage, we borrow existing STAT3 inhibitors or create new inhibitors.”

Current treatments often reduce symptoms without slowing the progression of the disease. Someday, Dr. Vogel hopes this basic research could lead to experimental drugs that might slow the pace of autoimmune disease by limiting the production of substances that cause inflammation and pain.

The development of novel therapeutic agents typically takes decades, “I find my inspiration in taking care of patients,” says Dr. Vogel. “I work on understanding the causes and mechanisms of juvenile arthritis in my laboratory because I one day hope to be able to provide each of them with an arthritis treatment that uniquely targets and resolves their disease.”