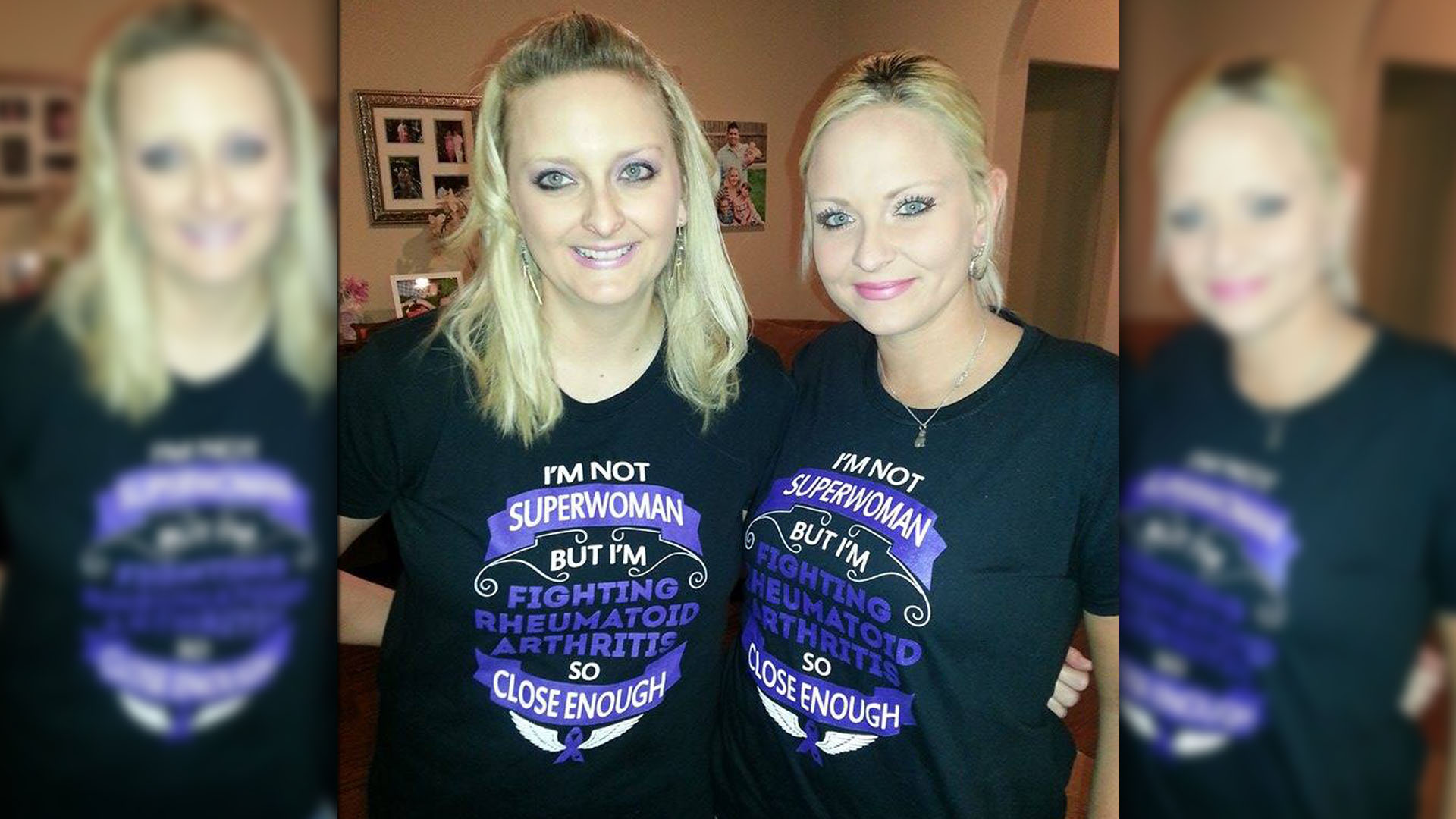 Posted at 16:29h in Rheumatoid Arthritis by ANRF 3 Comments
Share

Beth Hinojosa and Meredith Boutte, two sisters from Lubbock, Texas, are so alike that they are often mistaken for twins. It’s an easy gaffe to make – the sisters have always been the best of pals and shared nearly everything together, from clothes and makeup to laughs and parenting advice. However, their similar personalities aren’t the only thing they share. For the past two years Beth and Meredith have traversed the hardest phase of their lives as they’ve fought together in a joint battle, quite literally, against rheumatoid arthritis (RA). Now, relying on each other for strength and support, this dynamic duo has become closer than ever before as they continue to wage war against rheumatoid arthritis.

“It’s definitely not ideal, but it has been incredible to have the support and be able to share this fight with my sister. We have been close to all our lives,” expressed Meredith. “And she is the only person that could ever understand what I go through.”

Two years ago, the sisters were diagnosed with rheumatoid arthritis just months apart. Meredith, who is 31, was the first of the pair to be diagnosed. Two months later, her 35-year-old sister, Beth was diagnosed with RA as well, along with fibromyalgia and lupus. Not only did Beth and Meredith decide to see the same doctor, but they actually began attending their appointments together. Because the sisters have the same chronic disease, take many of the same medications, and know each other better than anyone else, they are able to offer each other advice in a way that no one else can.

“We understand what it feels like to be in so much pain and feel so tired all the time, even when others don’t understand,” Beth explained. “It is immensely rewarding to have someone truly ‘get’ you.”

In just two short years, both women have experienced unimaginable hardships from their diseases. Meredith had to stop pursuing a career in nursing, as the constant stress of her career worsened her disease. She revealed that her arthritis “turned her world upside down and put her life on hold,” and was devastated when she had to stop attending nursing school. Still, her inner strength was what allowed her to adapt and continue to move forward.

“My confidence plummeted in all areas of my life when I had to stop school,” shared Meredith, “but as I came out the other side I decided I needed to change my course and set new goals for myself.”

Beth, too, felt held back by her arthritis, as the strain of raising three children as a full-time mom soon became more than she could bear. However, like Meredith, she was able to acclimate and power through by drawing strength from her past experiences.

“My whole life I am proud to say I have accomplished everything I wanted to despite how I was feeling,” said Beth. “I remember how challenging it was to go through graduate school while working full time, but I did it! Now, I feel how difficult it is to be a stay at home mom with rheumatoid arthritis, but I know I can do it just like I’ve done it before!”

Although each sister desperately wishes that the other didn’t have to go through the pain and suffering of arthritis, they cherish the fact that they are wading through the rough waters together. They agreed that the disease has made them substantially closer to one another and that they value their relationship now more than ever before. They expressed gratitude for always having someone to rely on and confide in, especially when one of them is dealing with severe pain or fatigue.

“It means the world to me to have Beth’s never-ending support,” Meredith said. “I know she will fight this battle with me and never quit.”

When they’re not battling rheumatoid arthritis together, the sisters share the joy of being mothers; Beth has three children and Meredith has one. Though at times they feel guilty that they aren’t able to keep up with the fast pace of their young ones, they found that their children have helped them to stay positive and take their minds off of the challenges of daily life with rheumatoid arthritis.

“My three kids keep me busy and prevent me from feeling sorry for myself,” explained Beth.

Beth and Meredith are acutely aware of just how lucky they are to have a round-the-clock support system in each other. They began sharing their story in hopes of providing others with that same support. Recently, the women were featured on Lubbock’s Fox 34 News, “Sisters Endure Incurable Disease Side-by-Side.” Now, they are sharing their story with the Arthritis National Research Foundation because they want others to know that they are not alone.

Beth and Meredith hope that being vocal about their story will help others fighting rheumatoid arthritis to find the same support that they were fortunate enough to find in each other.

“We want to share our stories to help spread awareness of rheumatoid arthritis to hopefully help someone else battling the same disease,” said Beth. “No one should ever feel alone. “

Who has been your greatest source of support? How are you spreading arthritis awareness like Beth and Meredith? Tell us in the comments below!