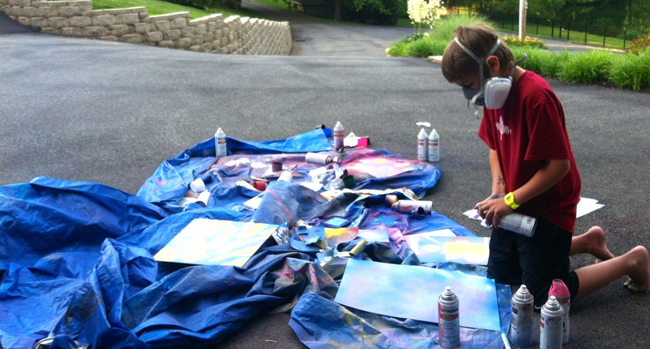 Eleven year-old Roth didn’t count on getting arthritis – and most kids usually don’t. To the public, it’s an elderly person’s disease. However, he was diagnosed with Enthesitis; a type of arthritis that inflames the part of the body where the tendons and ligaments insert into the bone. For Roth, it’s his knees that are primarily affected.

For anyone about to enter middle school, and who is as creative and active as Roth is, arthritis is about as convenient as a nail in your foot. He has been playing the drums since age five, the bass guitar since age eight, and enjoys playing soccer with his friends. Unfortunately, his arthritis constantly puts him in pain, making those normal eleven year-old tasks riddled with suffering and discomfort.

But instead of being down on himself, Roth decided to take matters into his own hands and do something most adults don’t always know how to do – start his very own business.

The idea came to him when he decided to make a yarn bowl, a decorative bowl that holds yarn and keeps it from getting entangled when knitting, for his Nana. Proud of her grandson for his creation, Nana showed the bowl to her friends and they decided they wanted one too. Roth got to work and after more and more bowls, his parents encouraged him to make a business out of his hobby. After a start-up loan from his parents and forming a relationship with a local ceramic studio where he creates his art, Roth now takes orders and uses his creativity to create something beautiful and handmade for others.

Because his mother is the founder of a nonprofit, she explained to Roth the importance of giving back. After doing research, he and his father decided to donate a portion of his business’ proceeds to the Arthritis National Research Foundation, and a local charity that helps abused children.

“I chose ANRF for two reasons,” Roth explained. “Firstly, because my knees really hurt and I wish they wouldn’t ache after I play sports, and secondly, because our family friend is affected by juvenile arthritis very badly.”

Roth knows firsthand what arthritis pain feels like and so was sympathetic to his friend’s plight. From soccer stretches that turn painful, nighttime knee pain at bedtime, and worst of all, having to get blood taken, as a fellow juvenile arthritis sufferer, Roth wants a cure just as badly as his friend and every child affected does.

One of Roth’s signature bowls

Though he takes anti-inflammatory medications and steroid gel cream to ease the pain, Roth wishes there was something that would make all the pain vanish. Though being more active usually triggers more pain, he has found that swimming and being underwater help the best.

Roth was even featured on www.bonesigharts.com as the spotlight person of the month. To those of his peers also suffering from different forms of arthritis, Roth urges them to, “hang in there and support this foundation so we can find the right medicines to help us feel awesome.”

July is Juvenile Arthritis Awareness Month – make a donation today to help kids like Roth who are in constant pain.