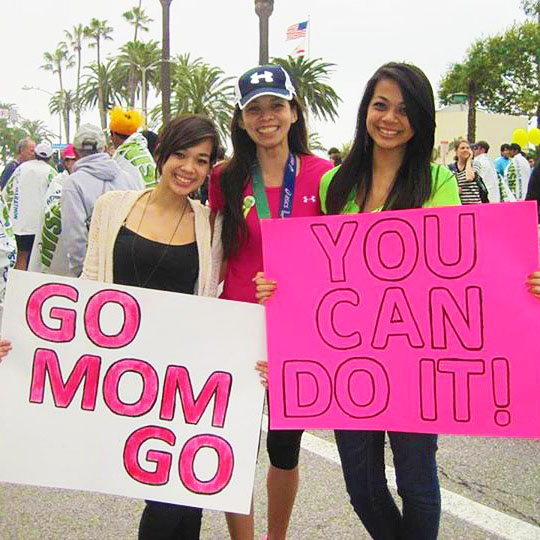 Posted at 11:41h in Racing For A Cure by ANRF 0 Comments
Share

At the start of each marathon she competes in, it’s the sound of the starting gun firing off that jolts Carmen into action, sending her weaving through the bustling pack of runners that surround her. Because she, her mother, and her sister suffer from arthritis, a fear exists that her two daughters might one day be diagnosed with the same disease that has caused so much pain throughout her family. Despite being diagnosed with rheumatoid arthritis and osteoarthritis five years ago, Carmen competes in long-distance running events to raise arthritis awareness in an effort to help find a cure for these diseases before anyone else she loves is plagued by them.

Just as she nearly “jumps the gun” in her marathon racing, she has taken a similar approach in being proactive with raising arthritis awareness. Through social media, Carmen has become staunchly committed to showing her daughters that she is running, thoroughly enjoying life, and thriving with rheumatoid arthritis, despite its challenges and difficulties. After receiving so much positive feedback from the arthritis community, she now has an even bigger purpose – to demonstrate to everyone affected by arthritis that it is possible to live a full, meaningful life and be thriving with rheumatoid arthritis.

“When my daughters expressed their fears of developing RA, it made me determined to fight hard to show them that it’s not the end of the world, and that it is possible to still live life to the fullest,” said Carmen. “It’s difficult, but it’s not a death sentence.”

By the time Carmen’s doctors diagnosed her with RA and OA at age 36, excruciating pain and crippling fatigue had become her norm. The long-distance runner, who will be turning 42 in August, was suffering with unexplained pain for several years but had attributed the aches and pains to aging and lingering sports injuries. It was only after the results from a blood test that pinpointed her true ailment.

In just five years, the destruction of Carmen’s arthritis has been substantial. Recent X-rays revealed joint damage in her hands and lower back and her shoulders no longer have their full range of motion. With profound fatigue she finds it hard to muster up the energy to go out with her friends at times, but after years of experimenting with medications, she has found a combination that controls the bulk of her pain while limiting the harmful side effects.

However, according to her, Carmen’s greatest struggle isn’t the physical pain she experiences, but rather the emotional ramifications of her disease. She feels angry and upset when she can’t do the most basic of tasks, such as open a water bottle, pick up a cup of coffee or prepare for work.

“RA is so much more than just painful joints,” revealed Carmen. “My hardest battle is against my emotions.”

Carmen refuses to give into the temptation to dwell on the negatives in her life, and attributes her positive attitude to the unyielding support of her two daughters, who also serve as her greatest source of motivation. Her favorite photo (pictured at the top of this story) is one in which her daughters are cheering her on at a race, a scene that epitomizes their relationship – Carmen is as their hero, and her daughters as her most ardent supporters. She folds up the picture and carries it with her during her marathons to draw strength from it, reminding herself that she is not competing for herself, but rather to show her daughters what it means to be thriving with rheumatoid arthritis.

Carmen’s Instagram account (@lilcarmen73) became her main platform for sharing her struggles and triumphs while running and living with arthritis. What started as a mission to inspire her daughters turned into a source of encouragement to numerous people in the arthritis community. When arthritis patients began reaching out to telling her to run a few miles in their honor because they couldn’t, she finally realized the magnitude of what her running accomplishments truly meant.

Carmen enjoys the camaraderie she finds while racing with the Arthritis National Research Foundation’s Racing For A Cure team. In October, she plans to meet up with her teammates at the Long Beach Marathon’s 5K event to compete with the team members that have encouraged her every step of the way. Additionally, she has eight races marked on her calendar for fall, ranging from 5Ks and half marathons to trail races and triathlons.

“I always wear my Cure Arthritis bracelet when I do races and long training runs,” said Carmen. “The bracelet reminds me that being able to run is a gift, and also that I have so many people out there cheering me on.”

Support Carmen with a donation on her Racing For a Cure page!

Carmen is inspiring her daughters today, showing them how to be courageous in the face of a serious diagnosis. No matter what the future holds for Carmen’s family, it’s safe to say that their champion isn’t planning to stop spreading hope and awareness anytime soon.

“In the past, I never realized the impact that I could have on the lives of others through my running. Being able to run despite having arthritis is a gift that I refuse to waste. To anyone out there in need of support, don’t give up. You never know what tomorrow will bring.”

Who inspires you to keep thriving with rheumatoid arthritis or in the face of your arthritis diagnosis? Tell us about YOUR support team in the comments below!