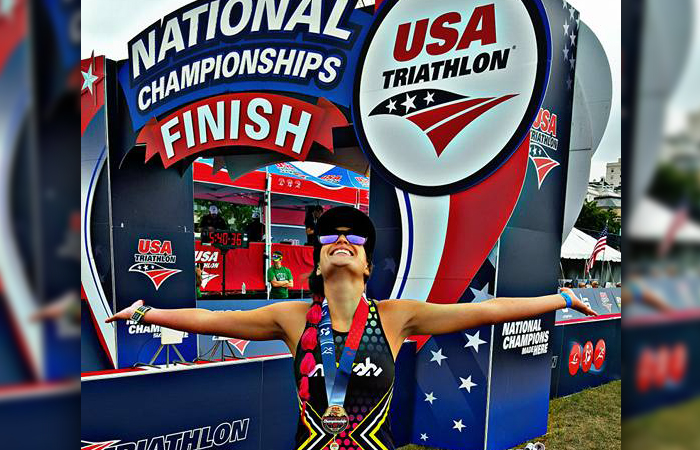 Dina Neils, the notorious “Titanium Triathlete,” is a competitive triathlete with rheumatoid arthritis racing with two total hip replacements. Since we last caught up with her in 2013, she has achieved a notable milestone in the sport, competing in the USA Triathlon Age Group Olympic Distance National Championships on August 8. Dina took a breather from her training regiment to give us a behind-the-scenes glimpse into her accomplishment.

It’s an understatement to say that The USA Triathlon Age Group National Championships didn’t go precisely according to plan for Dina Neils. Between her rheumatoid arthritis igniting pain that rippled throughout her entire body and her legs buckling beneath her in weariness, she considered dropping out of the race and accepting the demise of her yearlong dream of competing in the coveted race. However, the veteran rheumatoid arthritis athlete knew how to handle the unexpected — with brute force and her fighting spirit. She adjusted her sails and pressed onward through the icy waters of the swim and the rolling hills of the bike and run course, setting a new personal best for the 34.5 mile course.

“I fought with everything I had out there,” Dina recalled. “The last mile I was flooded with emotion. My heart was pounding out of my chest and I felt so weak that I thought my legs were going to give out at any second.”

Although Dina’s RA caused havoc during the entire race, it was especially volatile during the swim. By the time she reached the shore, the chilly waters had aggravated her RA so much that her entire body stiffened and she felt like it was shutting down. Dina broke down in tears as she pondered a difficult question – would her health force her to throw in the towel, or would she find a way to persevere? 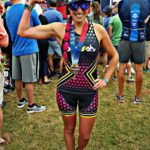 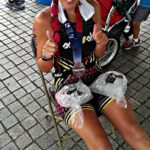 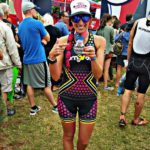 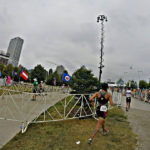 “As I was attempting to swim through the pain, I just wanted to give up. It was a far cry of how I envisioned my race at Nationals unfolding, and I didn’t know how I would possibly make it through the bike and run course with my RA in such a vicious state.”

After spending a few moments in the transition area, collecting herself, Dina thought about the support and camaraderie from her beloved RA community and pieced together every ounce of strength that she could find. The result? In a race that Dina wasn’t sure if she would even finish, she placed 136th in her age group in a time of three hours, two minutes, and eighteen seconds. She demolished her previous personal record by over two minutes, making it the most significant athletic achievement of her life.

“I thought about the people in my life that have always encouraged me,” shared Dina. “I fought back not just for myself but for all of us that struggle with RA.”

In 2013, Dina abandoned ship in her runner career in favor of the lower-impact sport of triathlon after some gentle prodding from her physical therapist. The beginning of her triathlon career came at perfect timing, as Dina’s arthritis unfortunately came out of remission with a vengeance, requiring less running and more cross training. She now faces a total wrist fusion before the end of the year, spawning a new challenge in the swim and bike events as she adjusts to the immobility of her wrist.

Well-known in the RA community as the “Titanium Triathlete,” Dina seeks to spread awareness and motivation to all of her devoted fans. By making a difference and touching the lives and hearts of others, she has found purpose in her life, a gift she doesn’t ever take for granted.

“Do what you are passionate about,” advised Dina. “An RA diagnosis is not the end of the world. Keep pursuing your dreams, live the life you’ve imagined, and most importantly, never give up!”

As Dina unwinds after her goal race of this year, she refuses to rest and is already planning her next triathlon quest. After Dina’s doctor predicted that she would be in a wheelchair at this point in her life, she is committed to proving the naysayers wrong by chasing down her dreams, one swim, bike, and run at a time. For this titanium triathlete, the sky’s the limit.