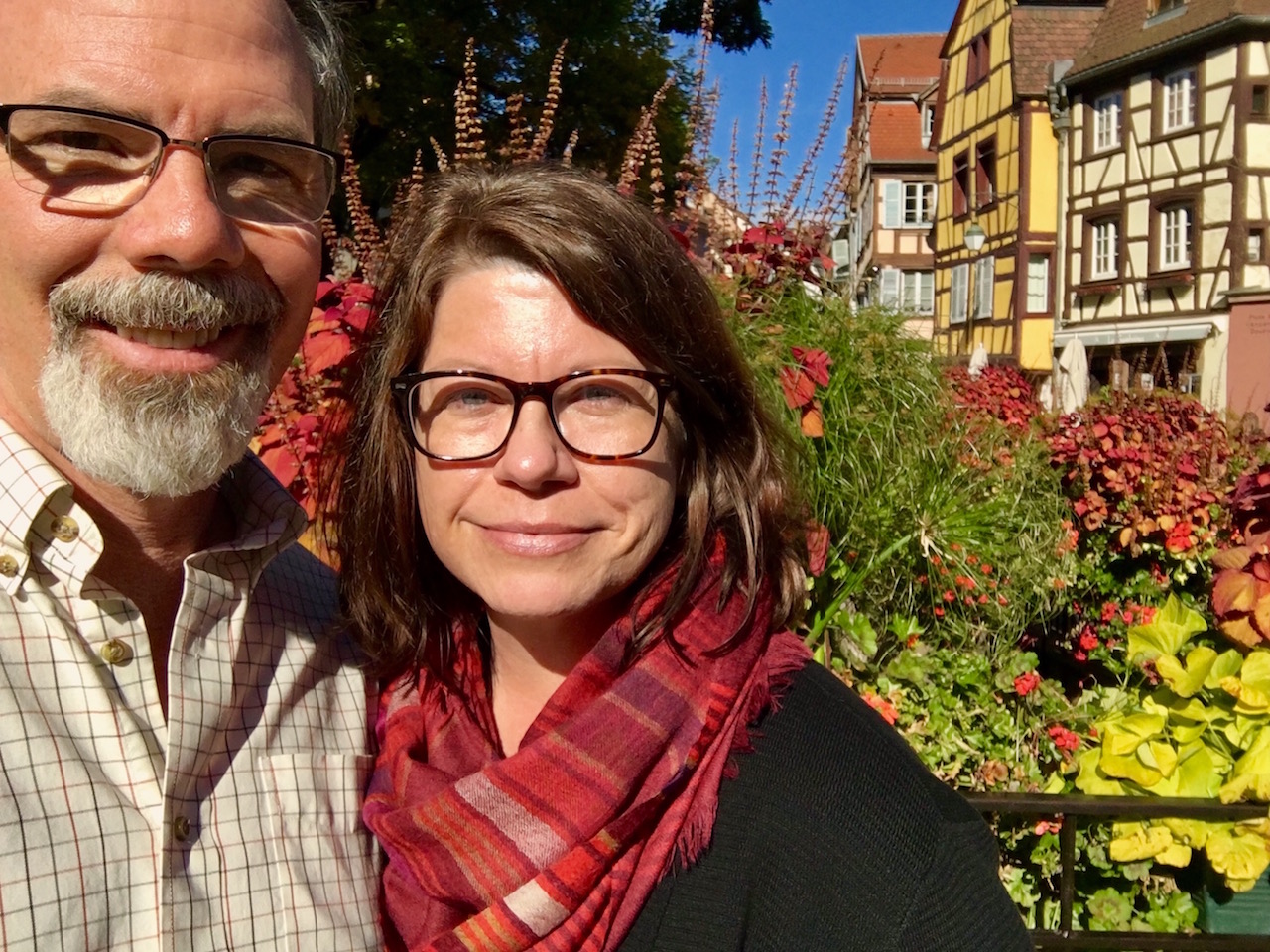 Sometimes you end up in the wrong city in a foreign country. Like confronting the onset of Rheumatoid Arthritis, each situation requires a new language, especially when traveling with arthritis. Testing positive for Resilience Factor is a plus. As I wrote in last month’s traveling with arthritis article, my husband David and I traveled to Paris, fullﬁlling a dream to travel abroad. Just as life, we had loose-knit plans, and were determined to live, laugh, and confront any bumps in the road together.

After the 9-hour red-eye ﬂight, we were surprisingly alert arriving Paris. The ﬂight caused a good deal of pain and stiffness, but I was eager to greet this romantic city. At Charles de Gaulle airport, our ﬁrst task was to navigate to the Paris Metro. A very kind French woman led us down the stairs, up the stairs, and around to ﬁnd our transfer. She spoke only a couple words of English, but her smiles and gestures communicated a beautiful welcome to France.

The Paris Metro is an artful, historic wonder, but not very disability-friendly. Traveling a mile or two requires multiple ﬂights of stairs, and the system resembles an ant colony. Finding the exit is often confusing, as Sortie (Exit) signs were sporadic. We learned to simply follow the rush of fresh air. Emerging on a sidewalk in the center of Paris was thrilling. My hip, shoulders, and hands were in revolt, but I rolled luggage through the narrow maze of Paris streets to the oasis of our hotel.

We visited some of the usual sites, but were just as intrigued by the very texture of life. Artistic detail is everywhere in France: architectural, social, and culinary. There is a constant forward bustle of activity, yet conversely, meals at cafés were protracted affairs, allowing time for conversation and observation. Cell phones were scarcely observed. It struck me that Parisians possess a brisk efficiency at the art of life. 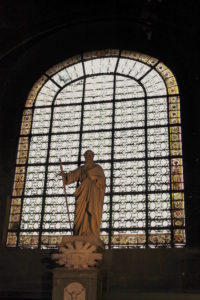 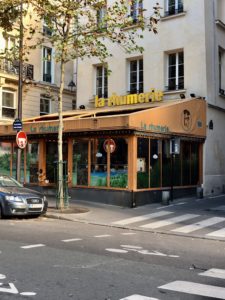 Some Difficulties in Traveling with Arthritis

We planned our trip to be pedestrians, relying on the excellent train systems of Europe. Despite public transportation, I logged as many as 6 miles per day on my Fitbit. I cannot believe I was able to do this, but of course my body rebelled. Given the difficulty with differing electrical currents, my therapeutic-grade heating pad stayed home. In its place were menthol heat patches and a lot of fortitude. When the latter failed, we attempted to ﬁnd a heating pad at a pharmacy. Communication was difficult, and my only option was a hot water bottle. Charming, but I opted out. What was incredibly thoughtful is that each pharmacy is clearly marked with the same neon green cross sign.

Waiting in line at historical sites was quite uncomfortable for my hip and ankles. Still, I focused on the now. The Eiffel Tower is a staggering, romantic wonder and centuries old cathedrals were alight with stained glass and collective emotion. Despite strong will, Rheumatoid pain and exhaustion meant I simply had to cross a couple of must-do’s off of my list. Just as I do in daily life, I found other simple pursuits beautiful and enriching.

Desiring to see more of Europe, we took advantage of the rail system and journeyed to enchanting Strasbourg and Colmar, France, and to Triberg, Germany, in the heart of the Black Forest. We left Strasbourg on a pre-dawn regional train, with a transfer in Offenburg, Germany. Having 5 minutes to transfer and not ﬁnding signage, we hurriedly asked a station employee walking past. He replied, “You have 3 minutes! It’s the red train!” That’s when hilarity ensued.

I’m bumbling with luggage, the morning difficulties of RA, and boarded as the doors on the red train were closing. David asked two passengers, “Triberg?” Yes, Triberg they insisted, despite being puzzled by the town’s spelling on our ticket. Out of breath, we settled on the train and watched the morning mist rise across the rolling farmland of Germany. All along, I had this strong feeling that we were not on the correct train. Then we pulled up to the station in Frieberg. Yes, Freiburg, which is pronounced “fry,” where Triberg is pronounced “tree.” Huge lesson in foreign travel.

There we were in the wrong town, luggage in hand, and me struggling with pain and stiffness. So we went for coffee. We giggled over our predicament, and took the attitude that we’ll get there eventually, or we’ll explore Freiburg. The clerk at the train station was able to re-route us on a couple of trains to reach Triberg, home of the cuckoo clock.

We boarded the correct train, and then the movie scene played out. The German conductor in uniform and cap viewed our original ticket and queried. We explained, and were fearful of being penalized. Instead, he dryly replied in precise, but strongly German-accented English, “You did not take the most direct route.” Lifting his brow, he traced the route in the air with his ﬁnger.

Triberg is a tiny, beautiful story-book town in the Black Forest. The train station is more akin to a bus stop, and was situated about a mile from our little hotel. Tugging luggage, I walked and rested, walked and rested, along the uphill route. We checked in to the tiny hotel and sat down in the attached café for a slice of Black Forest Cake. The café was run by a lady whose manner reminded us of Mrs. Patmore of Downton Abbey. The decor was straight out of grandma’s parlor in the nineteen-eighties: brass light ﬁxtures, mauve ﬂoral wallpaper, and artificial greenery. We giggled over our cake when Jimi Hendrix’s All Along the Watchtower wafted through the café. Followed by Frank Zappa.

The most difficult day for me happened in Triberg. Having slept on a bed that felt more like a hard box spring, every ﬁber of my body hurt. RA seemed to be asking, what the heck are you trying to do?? I felt ill, and incredibly depleted. I had a goal, so I hydrated, put on cushioned socks, Birkenstocks, and my Cure Arthritis t-shirt.

The mountainside hike was fairly short, though quite steep. My clogs were not the best shoe choice, but still the most reliably comfortable. I made my way up toward the waterfall, pausing along the way with nature photography. The Autumn air was crisp, and we overlooked the village with plumes of smoke rising from chimneys below. I reﬂected on friends for whom each step is difficult, and was ﬁlled with gratitude for my capability.

Traveling with my rheumatoid arthritis was made possible thanks to my biologic, steroid injection, opioids, fortitude, and adrenaline. Opting for hotels as old as the 14th century, I balanced thrilling life experience vs. personal safety. Navigating tiny, awkward bathrooms was difficult. I also encountered stair railings that were built an age ago for people of shorter stature. Cobblestones threatened to spill me forward, but I focused on the story they told. Despite packing a small, capsule wardrobe, I’d do this again with half the items and fewer bottles of supplements and what-ifs. The single best decision was pre-paying for hotel breakfast. I would stiffly navigate down the ancient stairs, and enjoy an array of French delights with fumbling hands. Cafe Creme was presented with artistic ﬂourish in warmed pitchers. With a fussy autoimmune appetite, my favorite foods were farm-fresh yogurt and a delectable pastry, Pain au Chocolat.

The greatest lesson I learned when travel with arthritis was patience. One of the tenets of Buddhism is the “perfection of patience.” I fall so short, but this learning experience has had a profound effect. Had I not traveled, I would have missed the wisdom of 16th century St. Francis de Sales, who observed, “Nothing is so strong as gentleness; nothing as gentle as real strength.” As life would have it, St. Francis is the patron saint of writers and journalists. Isn’t the world simply neato?

Did Jody’s traveling with arthritis series resonate with you? Tell us about it in the comments below.

Jody Moody is a #CureArthritis supporter, writer, and wears a genetic crash helmet. Enrolled in the School of Chronic Life: raising a daughter with Spondyloarthritis, sons with Ehlers-Danlos (one lives with Heart Failure), she is battling Rheumatoid Arthritis and Hashimoto’s Thyroiditis. She enjoys connecting with and advocating for other patients. Distracted by nature, she hikes @RacingForACure and can be found @RheumerHasIt on Twitter and Instagram and blogs at rheumerhasit.com