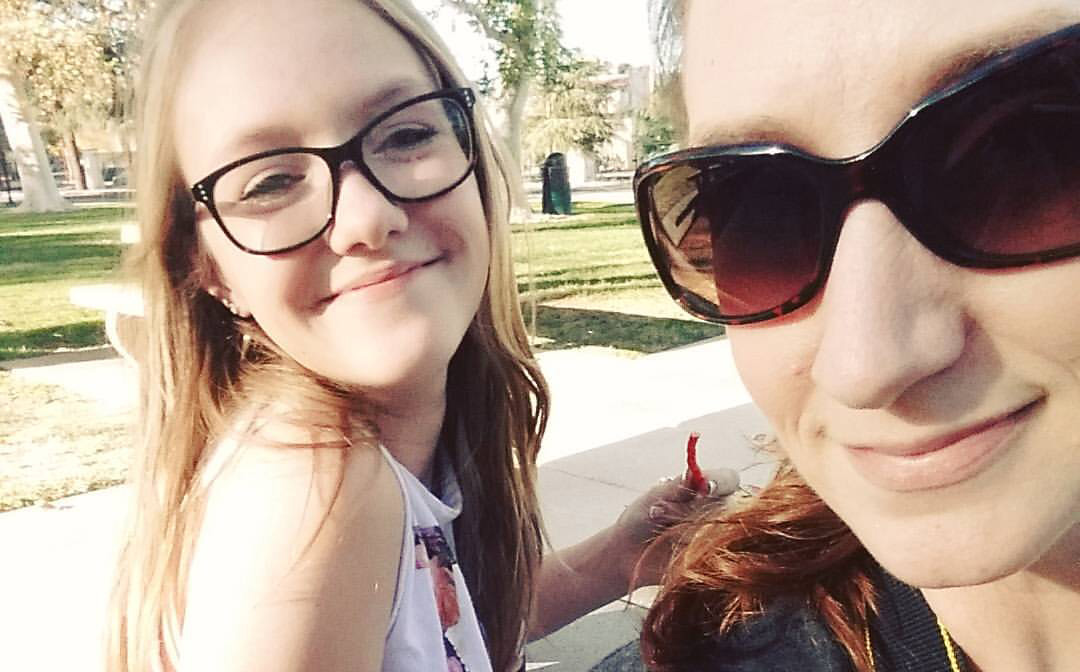 Stacey and Jordan are a mother and daughter residing in an ordinary two-room house, but with one exception — in actuality it’s a “two rheum house” as Stacey coined it. The two have suffered from rheumatic disease, rheum for short, for quite some time, officially juvenile rheumatoid arthritis (JRA) for Jordan and Rheumatoid Arthritis for Stacey.

Besides sharing similar diseases, they also share a passion for helping others in the arthritis community. In 2008, they created Jordan’s Pink Angels, a social media account that offers a candid account of Jordan’s treatment regiment, provides information about arthritis and JRA, and serves as a valuable resource to their fellow JRA friends.

“Our lives are not what we expected,” explained Stacey, “but I truly believe that we were dealt this struggle so we can learn from it and help others.”

Jordan, who is thirteen, was the first of the pair to be diagnosed. She was just two years old when her right knee swelled up to the size of a softball. She lost the ability to walk on her own and Stacey had to carry her to and from her bed for her naps. When it became clear that Jordan’s health was steadily declining, Stacey rushed her to urgent care where she was thoroughly examined, or so they thought.

To Stacey’s frustration, doctors shrugged it off as a bruise typical of playful toddlers her age. Far too often kids with arthritis are misdiagnosed or simply not diagnosed early attributing their pain instead to “growing pains” or “typical” bumps and bruises. But Stacey and Jordan both knew this wasn’t just a bruise and as time passed, Jordan’s knee grew more painful.

Persistence led Stacey and Jordan to a pediatric orthopedic surgeon who finally diagnosed Jordan with JRA. And then, six months later, Jordan developed uveitis, a disease marked by inflammation in the eyes that is prevalent in many kids with JRA and can lead to blindness if left untreated. Now they knew what they were battling for Jordan, but they didn’t know they would soon both be facing it together.

Stacey had been struggling with her own battle for years. Battling the pain, swelling, fatigue and migraines that come along with her autoimmune disease. She was officially diagnosed a few years after Jordan with rheumatoid arthritis. Stacey related that she had been showing signs and symptoms since childhood, often suffering from undiagnosed pain and swelling. Knowing first hand what her daughter is experiencing allows Stacey to empathize with Jordan’s condition.

To treat and try to control their pain and symptoms both Stacey and Jordan take immunosuppressants and NSAIDS. Though the treatments allow two women appear healthy on the exterior, Stacey revealed that there is far more to their stories than what meets the eye.

“People look at Jordan and I and see a perfectly healthy mother and daughter,” Stacey wrote in her blog. “This trivializes our suffering. They don’t know the cocktail of medications we are on, some of which leaving us with serious side effects and susceptible to infections.”

Jordan and Stacey draw strength from one another by fighting their rheum in tandem. Whether they are taking their medications at the same time, going to doctor appointments and infusions together or simply lending a listening ear on hard days, the women are always supporting each other in every step of their respective rheum journeys.

“Jordan handles the same illness I do without ever once complaining,” said Stacey. “I figure, if she can do it, so can I. Jordan is my hero.”

They created Jordan’s Pink Angels created nearly eight years ago to raise awareness about juvenile arthritis, specifically to educate about the difference between juvenile arthritis and osteoarthritis since the two diseases are often confused for one another. Many people still do not know that kids can get arthritis so the page focuses on the life and trials of Jordan as she conquers her rheum to show the world what kids like her go through to fight back against their disease.

As a result Jordan’s Pink Angels has amassed a small following of adoring fans who draw strength from Jordan’s bubbly, tenacious and inspiring personality. A quick scroll through the page reveals posts of Jordan smiling during infusions, cracking jokes at her doctor appointments, giving inspiring speeches and showing some of the pain that juvenile arthritis brings to her life.

Stacey says that she started the page 2 Rheum Family to chronicle their family journey, but more importantly to make a difference by educating the public that kids get arthritis and that it’s not “just arthritis.”

“Kids like me need to be taken seriously,” said Jordan. “It’s a lifelong disease, we are in pain everyday that can cause us become disfigured, blind and disabled. It can even cause to us to die.”

With such serious consequences, Stacey and Jordan understand the importance of arthritis research to find answers, new treatments and hopefully a cure. To show their support they frequently sport their Cure Arthritis gear on social media. Jordan said that she hopes scientists would one day discover exactly what causes arthritis so new treatments and a possible cure can be developed. Stacey expressed gratitude for how much ANRF has helped her family, and said she is excited to see what will come next.

“I love that the Arthritis National Research Foundation has research happening in several different types of autoimmune arthritis diseases,” said Stacey. “My family has undoubtedly benefited from the amazing discoveries from the researchers the foundation has supported. In the future, I’d love to see Jordan off all medications and pain free.”

Thanks to their fighting spirits their rheum hasn’t stopped Stacey or Jordan from being proactive about educating others about the symptoms, treatments, and possible complications of JRA and rheumatoid arthritis. Although neither Stacey nor Jordan would ever wish for the other to have rheum, they are grateful for the opportunity to fight their diseases and share their story with the world side by side.

“Rheum is an incredibly challenging disease to live with, but we must resist the urge to dwell on the negatives,” advised Stacey. “I live by the mantra, ‘Your ability to power through the bad days is 100%.’ You will make it through if you take one day at a time.”

Jordan agreed. “Never give up, anything is possible.”

Do Jordan and Stacey or someone like them inspire you? Please tell us in the comments below.